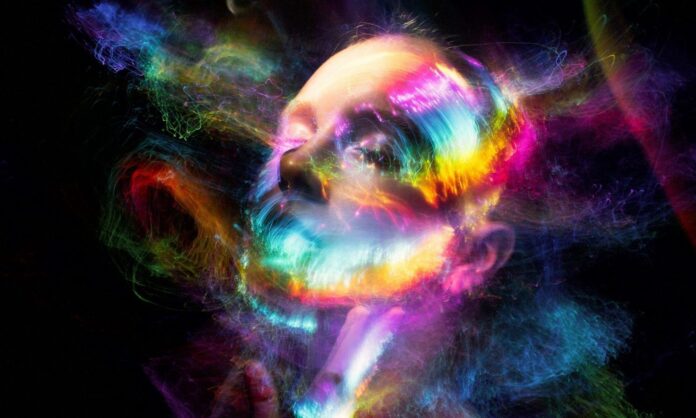 Legal psychedelic medicine is poised to soon disrupt the multibillion-dollar mental health field. Treatments being trialed today in clinical settings using substances like psilocybin-containing mushrooms will soon offer legal alternatives to the more than 50% of patients receiving therapy for major depressive disorder (MDD) who do not respond to approved depression medications.

As psychedelic substances meet with ever-decreasing resistance from the public — evidenced by the growing number of U.S. cities passing decriminalization laws — the reality of adding psychedelic treatments to the mental health landscape is coming sharper into focus. Along with creating more opportunities of care for patients, the creation of new effective therapies will likely put pressure on healthcare providers to examine the upside of psychedelic therapies and how such treatments will inevitably affect their bottom line.

While these therapies will not be a cure-all for everyone, over the next three to five years an expanding number of psychedelic treatments will produce alternatives for the many patients who find no relief from FDA-approved, first-line therapeutics like selective serotonin reuptake inhibitors (SSRIs). How these new systems will roll out is up for debate, but what is certain is the considerable amount of clinician hours that will go into psychedelic therapies.

Since legalizing the use of psilocybin-containing magic mushrooms in 2020 through a ballot measure, Oregon is now in the process of creating an intricate statewide system for qualified caregivers to deliver psilocybin treatments in therapeutic settings. Sessions using psilocybin can last over six hours, which does not include vital therapy before and after treatments.

MDMA-assisted therapy for severe post-traumatic stress disorder (PTSD), which is very close to being an FDA-approved therapy, will likewise require significant clinician involvement before, during and after a session. Ketamine treatments — currently the only psychedelic therapy that is federally legal in the U.S. — has hastened clinics opening up all over North America, providing some degree of relief for those roughly 50% of Americans with MDD who don’t respond to current meds. Just last week, health insurance giant Blue Cross Blue Shield announced eligibility of coverage for ketamine treatments, a major endorsement of such therapies.

All of this relatively recent activity means a considerable bottleneck lies up ahead for clinicians administering psychedelic care at an affordable cost. You can bet that other healthcare payers such as UnitedHealth Group and Anthem are busily crunching numbers and gaming out the more likely psychedelic therapies they will regard as eligible for coverage.

While forward-thinking organizations such as the California Institute of Integral Studies (CIIS) and Fluence have been actively positioning ahead of the curve and educating and training mental health professionals to best treat patients in new psychedelic settings, demand in the near term will surely outpace what providers can deliver — at least at an affordable price for most patients. Experts say the solution involves digital and telemedicine approaches to relieve the inevitably escalating caregiver burden and help build systems that can effectively scale up.

Dr. Walter Greenleaf, renowned neuroscientist and medical technology developer working at Stanford University, believes that the number of current therapists equipped to deliver psychedelic therapies does not match future need. Greenleaf is the foremost authority in the field of digital medicine and medical virtual reality (VR) technology with over three decades of experience. He is often referred to in Silicon Valley circles as the “godfather” of therapeutic VR.

“To be effective, and to be used safely, psychedelic-assisted therapies are reliant on proper engagement, support, and clinical supervision by trained clinicians,” says Greenleaf. “There are very few of those — therefore, the only way to properly support the use of psychedelics in therapy is to leverage technology.”

His point is well taken. Greenleaf’s current research focus is on developing computer supported clinical products, with a specific emphasis on applying virtual reality and digital health technology to address difficult problems, including for use with therapies designed to treat PTSD, anxiety disorders and depression.

RELATED: The Progressive Impact Psychedelics & Cannabis Are Having Within The Medical Community

The use of VR in medical settings to provide emotional care is not a new concept. Over the past several years VR has been employed with greater frequency and effectiveness in ways large and small. Recently, the staff at a hospital in Long Beach, California, used virtual reality tech in a simple yet valuable context, distracting young patients during medical procedures like removing a cast.

“Kids need more than medicine. We normalize the environment for pediatric patients, usually through play,” Rita Goshert, director of Memorial’s child life program, told the Long Beach Business Journal. “Our role is to help comfort and distract patients during uncomfortable or anxiety-producing procedures.”

In 2020, the startup Olfactory Virtual Reality (OVR) debuted its Architecture of Scent platform to incorporate smell into therapeutic VR treatments. It has been deployed as VR exposure therapy — also known as “stress inoculation” — for military vets with PTSD. The technology adds memory-provoking scents via cartridges to VR experiences creating real-life sensations, including blood, diesel fuel, smoke and Iraqi spices, explains Neo Life. It’s an effective approach for modern military personnel, many of whom have grown up with digital gaming technology and may be more attracted to this style of interactive VR treatment as a substitute for conventional talk therapy.

All this activity in the VR industry has meant leaps in tech and a reduction in the cost of VR headsets (they now average approximately $300), which has created more accessibility for users. It has also seen the space expand exponentially. In 2020, VR in the healthcare sector was valued at $2.08 billion and is projected to reach $42.84 billion by 2028.

VR As Prep For Psychedelic Treatments

It was just a matter of time before a company like FireflyVR landed on the scene of the expanding psychedelic therapy field. Their technology, called the Sanctuary, is intended for use in clinical psychedelic-assisted therapies, providing value for clinicians by offering patients a tutorial and self-directed tool before and after treatments.

VR tech of this kind isn’t necessarily what you would think. It’s not an experiential total immersion like OVR’s fragrance gaming-tech simulation of urban warfare. It’s not like the app called Tripp either, the tagline of which is “the fitness solution for your inner self,” geared more as a mindfulness tool for consumers (and also used in some clinical settings) and featuring classical psychedelic visuals.

FireflyVR’s Sanctuary doesn’t feature trippy whirling psychedelic mushrooms or dancing machine elves. No astral projection or communion with the universe. It is not a simulated psychedelic trip. Instead, as the name suggests, the Sanctuary follows the zeitgeist of the psychedelic times.

Meant as a kind of preflight checklist to “reduce pre-procedure anxiety and develop positive intentions when the medicine is eventually administered,” it is a specialized clinical tool intended as an adjunct for therapy sessions. The VR product looks to cover the unmet need of assisting people unfamiliar with the use of psychedelics in clinical settings, as well as the many patients who will come to such therapies with no experience at all in psychedelic substances.

“We created the Sanctuary as a clinical tool using virtual reality to prepare a patient for a transformational psychedelic treatment,” says the CEO of FireflyVR, Shel Mann, whose company has had several years of intensive experience in the medical industry working with managed healthcare concerns like insurance monolith UnitedHealth Group. “We see the Sanctuary being used in clinical settings providing value for both patient and payers.” 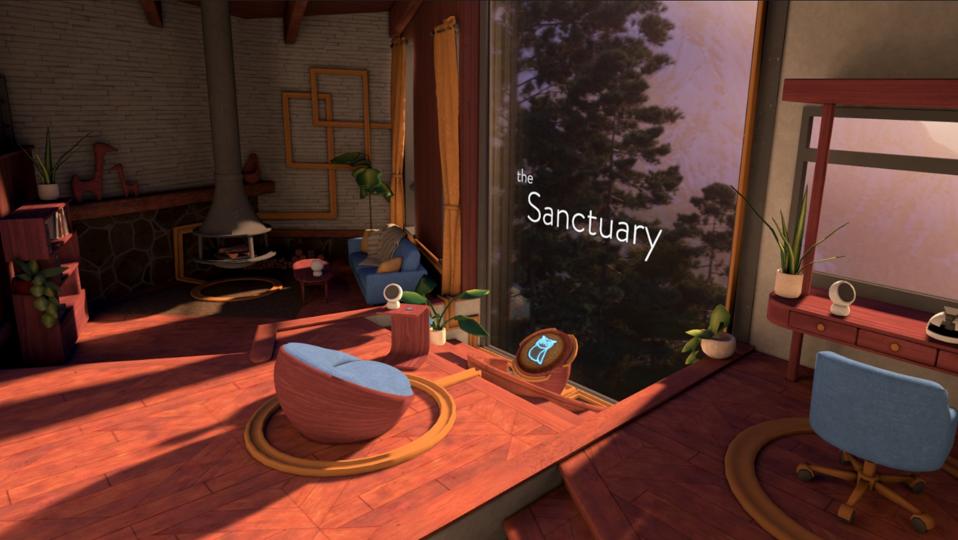 A first test drive of the Sanctuary displays scenes that are far more subtle than anticipated. Because the concept of virtual reality lends itself to full-throttle immersion, results can sometimes feel far too overproduced. This wasn’t that. The central scene is quiet and understated. A pleasant room with low lighting, Cubist art and low-slung 1950’s decor. The scene is warm and welcoming. An environment to not rush anything. You could be sitting in the celebrated Esalen Institute in Big Sur (the mecca of internal exploration for over 60 years), surely what the makers had in mind, or a bluff overlooking Yosemite Valley. The overall effect is quietness — precisely what you want prior to a mind-expanding flight.

“Well-designed virtual reality systems can be used to augment and extend therapy by establishing the proper ‘mindset and setting’ for therapy, and to facilitate post-session cognitive integration,” says Greenleaf, who is a scientific advisor to FireflyVR.

While the Sanctuary is still in the process of testing, there are currently key industry players who are interested in FireflyVR’s work. Matt Emmer, Vice President of Healthcare Practice at Field Trip Health, a global leader in the development and delivery of psychedelic therapies with treatment centers across the U.S. and Canada, says the company is currently testing the Sanctuary at their New York and Toronto offices and exploring a strategic relationship with Firefly VR. Mann also shares that other organizations have signed letters of intent to conduct a study of the Sanctuary, including Rochester Mayo Clinic at their integrative medicine and health center.

There will be more opportunities for VR to show its transformational upside, as a cascade of clinical studies is occurring at research universities worldwide — Johns Hopkins, Imperial College London, Maastricht University and UC San Francisco to name just a few. There are also nonprofit and for-profit organizations, including Usona Institute, the Multidisciplinary Association for Psychedelic Studies and Compass Pathways, all working diligently to usher in psychedelic treatments through important clinical trials with the FDA. 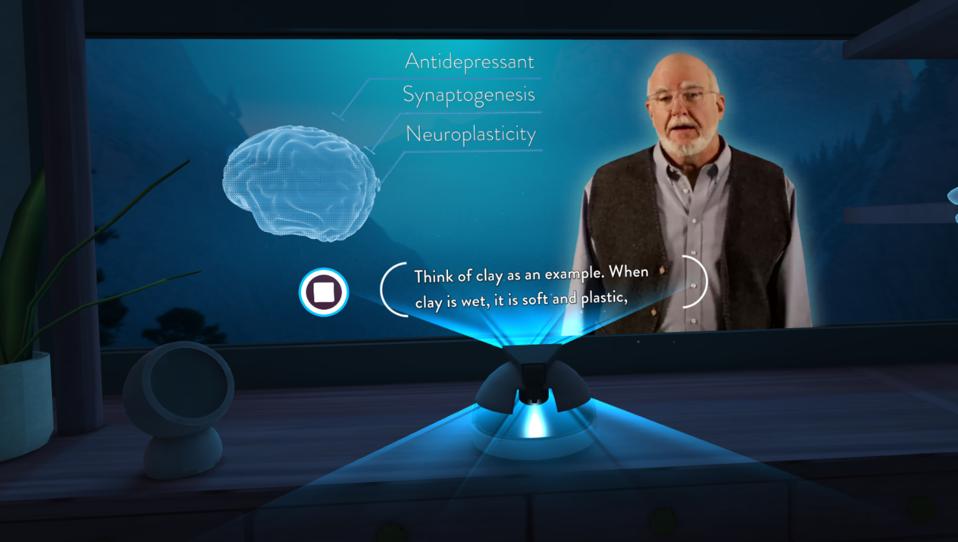 Mann believes that VR is especially effective in this field because it “provides small escapes from your own reality and its distractions,” he says, “Therapy often requires visualization. Many people lack strong visualization skills. VR can help fill that gap.”

Greenleaf notes of innovative VR, “We can shift attitudes and behaviors if we can activate the power of the brain’s reward system. This allows us to activate neuroplastic changes and reinforce behaviors and learning.”

That is perhaps one the best outcomes that psychotherapy can offer people: a shift in mindsets and behaviors.

Still, a significant part of the problem is access to mental health services. A current snapshot of a critical mental health professional shortage across the U.S. shows a troubling view of resources nationwide. A 2021 data visualization provided by Rural Health Information Hub (supported by a wing of the U.S. Department of Health and Human Services), highlights how a vast majority of U.S. counties fall into the category of “whole county is shortage area” for mental health practitioners.

Virtual reality, much like psychedelic therapy itself, is not a panacea that will singlehandedly fix the problem of access and affordability. But surely VR is a piece of the puzzle that could lend itself to a style of remote medicine that immerses a patient just enough to feel focused, connected and calm when approaching their emotional issues.

The Sanctuary is currently focusing on prep work before a psychedelic experience, says Mann, but with a roadmap that incorporates a comprehensive curriculum, including post-trip integration and eventually for use during actual psychedelic therapy (dependent on the specific molecule).

“The key issue today, which is what we are laser focused on, is that the world demand for mental health care is much greater than the supply, including for psychedelic treatments,” says Mann. “Our mission is to deliver immersive digital solutions that can scale, get this technology to the people that need it, and help solve this issue in tandem with key health providers.”