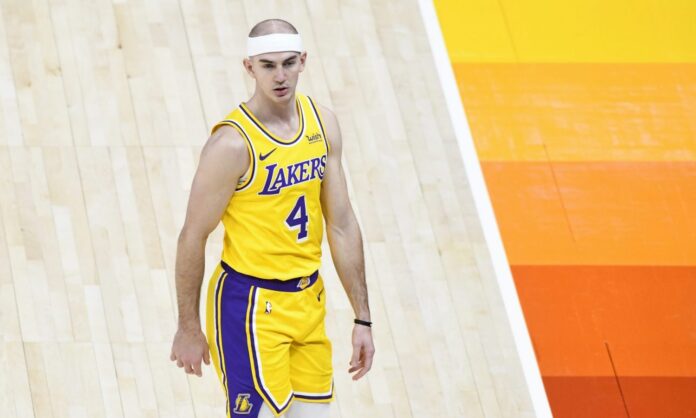 Like many Americans, one of the first things I do every morning is check the overnight headlines, including anything that happened in the sports world. Recently, I woke up to an article about Los Angeles Lakers guard Alex Caruso being arrested at Easterwood Airport in College Station, Texas for “possession of marijuana and drug paraphernalia.”

Given that Mr. Caruso is a guard on the reigning NBA championship team and an alumnus of Texas A&M, I assumed that his arrest, which would obviously make national headlines, was for some absurd amount of marijuana. I was wrong.

I get it, a professional basketball player getting arrested for trying to board a flight with a federally illegal substance is not a national tragedy. But you know what is? The fact that 545,602 Americans were arrested for marijuana-related offenses in 2019. And that 40,000 Americans were incarcerated for marijuana-related offenses in 2020. And that, in extreme cases, people are still being locked up for life for possessing a similar amount of marijuana to Mr. Caruso.

In all, that is 545,602 Americans who will have a much harder time finding a job because we, as a country, seem determined to keep marijuana federally classified as an illegal drug for reasons that are either based on a false premise or inherently racist. As for the politicians who push against the national trend towards legalization because of social or “public safety” reasons, well, those politicians are either stupid or lying.

Here in Harris Bricken’s New York office, we have been giving a lot of thought to “why” recreational marijuana should be legal. We have clients who are interested in getting licensed in New York. Regardless of whether they plan to obtain a cultivation license or a retail license, engendering the support of the local government is important for long-term success. Which means that we, as our clients’ advocates, sometimes need to explain to local government officials why: 1) embracing legal recreational marijuana is beneficial for their community; and 2) embracing legal recreational marijuana will not destroy the fabric of their community (dramatic, I know).

Our arguments in favor of embracing legalization apply on a federal level, and quite frankly, it doesn’t take a rocket scientist to get to the inescapable conclusion that there is no justifiable reason for marijuana to remain an illegal drug.

The tax revenue from legal sales is already a boon for many states. Let’s assume that federal legalization, when it finally happens, comes with a tax structure sufficient to offset the overnight IRC § 280E drain. Why on earth wouldn’t we, as a country with a healthy budget deficit, also want to capture some tax revenue from the other $100 billion of sales floating around the country?

Tax revenue aside, the ancillary revenue from national marijuana legalization would bolster our economy. Banking services, transportation and logistics, software, security, real estate, and on and on, are all industries that would gain revenue and, in turn, offer additional employment opportunities. Maintaining the status quo keeps all of those economic benefits in the black market.

And it’s not just making more money from a legal industry. The average annual cost of incarcerating a single American is $33,274. That is $1,330,960,000 a year spent on incarcerating Americans for marijuana-related offenses. Which does not even include the exponentially greater resources expended by law enforcement in investigating and prosecuting these “crimes” or the human cost of the lives ruined by such arrests.

But those are all easy statistical arguments that are hard to contradict with data. The social “harm” of marijuana is what politicians tend to rely on when claiming that legalizing marijuana would be a catastrophe of epic proportions. We are all familiar with the social arguments against legal marijuana: marijuana needs to be kept out of the hands of children; marijuana is a dangerous gateway drug; and marijuana somehow breeds criminal activity.

Let’s start with the ease of access argument. The reality is that marijuana will be harder for minors to purchase after it is legalized. I think I speak for many people when I say that in high school it is probably easier to buy marijuana than alcohol. Why? Because you can only buy alcohol from a licensed establishment that risks its license when it sells alcohol to minors. As far as I know, there aren’t any drug dealers that are concerned about “licensure” when selling marijuana to a high school senior.

That changes immediately when marijuana is legalized. A retail dispensary will not only have to prove that it can prevent sales to minors, but risk losing its license if it fails to implement systems for preventing underage sales. Those arguments against arresting and prosecuting marijuana sales become a lot different (i.e. justifiable) when tweaked to prosecuting illegal marijuana sales.

RELATED: Convincing Mitch McConnell To Support Legal Weed Is Still The Only Way It Happens

Of course the other reality is the fact that marijuana is really easy to buy now, even as an illegal substance. I am relatively certain that almost every American could buy marijuana right now within one phone call. I am 100% sure that every single American is no more than two phone calls away from buying marijuana. Ease of access can only get harder after legalization.

Is marijuana dangerous? Potentially. Anyone who argues that marijuana is harmless is doing a disservice to the industry. Just like any other substance, dependence on marijuana can have serious negative effects. I know people who failed to reach their potential because of marijuana usage. But I also know people who are dependent on alcohol with equally negative consequences, and the prohibition movement has been really quiet for the last hundred years.

In terms of marijuana being a gateway drug, I have yet to see an honest study that shows that marijuana use leads directly to narcotics use. I would argue that we all have seen many more people make bad life decisions under the influence of alcohol than after consuming marijuana.

But I won’t belabor the point. The alcohol vs. marijuana argument is well-tread and, quite frankly, irrelevant. Both should be legal. Both should be regulated. And both need systems in place to avoid consumption by minors.

You might again be asking: “what does this have to do with Alex Caruso?” Nothing and everything. A single professional athlete getting arrested for marijuana possession doesn’t actually move the needle, but it is a public reminder of where we are. With all of the excitement in New York legalizing recreational marijuana, it is easy to ignore that federal law still considers marijuana an illegal drug. Which means we, as a country, will continue to waste lives, time, and money fighting a “battle” against ourselves where everyone loses for no good reason. We at the Canna Law Blog hope the tide is turning and maybe, just maybe, putting a few more rational arguments into the ether will nudge us over the finish line.

Simon Malinowski is an attorney at Harris Bricken. This story was originally published on the Canna Law Blog and reposted with permission.