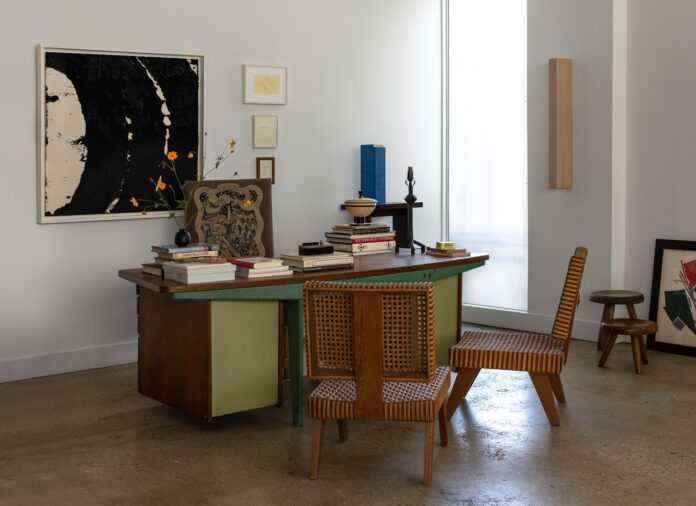 Most mornings, the celebrated furniture restorer and conservator Miguel Saco is ensconced in his Long Island City, New York, showroom and office by 7:30 a.m., his 15-year-old mixed-breed dog, Sarah, by his side. The brick building also houses Saco’s workshop, and throughout the day he moves through these spaces, addressing the distinct concerns of the remarkable furniture that fills the rooms and conversing with the loyal staff of seven he considers family.

“Every piece is special, and each one needs to be approached in its own way. In my shop, you won’t find two that need the same treatment, and that’s exciting, to develop an ability where you can work on three chairs that all require different approaches,” Saco tells AD PRO.

Over a career that spans nearly four decades, Saco has been entrusted with American and European furniture masterpieces; a range of antiques, some dating back to the 18th century; and more recent creations by the likes of Frank Lloyd Wright, Émile-Jacques Ruhlmann, Duncan Phyfe, and Jean Dunand. He is also sought out by architects and designers including Peter Marino, MR Architecture + Decor, and Selldorf Architects, as well as such institutions as the Metropolitan Museum of Art, the Royal Palace of Madrid, and Sotheby’s for his precise, masterful touch.

His name is revered in prestigious art and design circles, yet Saco shies away from the spotlight, invigorated instead by the creative process each new project demands, whether it’s re-creating the upholstery for a Gio Ponti lounge chair, gently repairing complex veneers, or fabricating a custom replica of a Paul Dupré-Lafon coffee table. Saco’s genuine love of furniture and respect for heritage led him to open his first atelier in downtown New York in 1982.

Saco’s devotion to craftsmanship, along with his good-natured disposition, are also what drew New York photographer Ori Harpaz to shoot these images of Saco in his element. “I’ve gotten to know Miguel through my collaborations in the design world, and was always fascinated by the history and stories that are in all the pieces in his workshop and showroom,” explains Harpaz.

Furniture was never part of Saco’s original plan. A sculptor from Galicia in northwestern Spain, he moved to New York in 1980, where he was hired by a restoration shop and discovered his natural penchant for furniture. He sought as much knowledge as he could, reading and attending museum and gallery exhibitions.