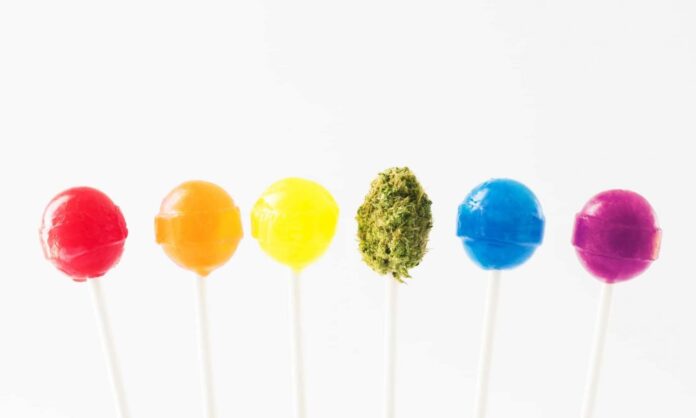 Florida officials are on “high alert” as THC edibles “are making their way into the hands of children and teens.” Of particular concern is the fact that the goods in question “bear a striking resemblance to ordinary candy.”

An image shared by the Charlotte Country Sheriff’s Office shows bags prominently featuring the trademarks of well-known candy brands such as Skittles and Nerds. At first glance, these items look just like genuine products. However, irregularities emerge upon closer examination. For instance, a “Cheetos” bag has a small label indicating THC content, as well as a triangle with a cannabis leaf.

Without looking closely, you would never know that these candies, that bear a striking resemblance to…

Given these telltale signs, it is reasonable to assume that the target market for these products is not the regular consumer of the candy or snacks in question. The main purpose of the infringements appears to be the concealment of the true nature of the products from parents, teachers, and other authority figures. Of course, there are still risks that someone will ingest these THC edibles by accident. For instance, a person might recognize the Skittles brand, but not know what real Skittles look like. Moreover, some consumers might conclude that brands like Cheetos and Nerds are entering the cannabis market. In fact, Frito-Lay (the makers of Cheetos) felt the need to clarify that the company “does not manufacture edible cannabis snack products and any packaging containing THC claims is not associated with our company or brands.”

The use of iconic brands’ trademarks is likely to trigger alarms for many consumers. However, companies in the cannabis space arguably face greater risks. Consider a scenario where THC edibles of unknown provenance were introduced in bags that looked like those used by a legitimate company that sells hemp CBD edibles. In that case, the risk of confusion would be much greater than where famous brands are infringed, yet the hemp CBD company will have less protection against counterfeits than a snack maker like Frito-Lay. As it notes in its cannabis guidance, the United States Patent and Trademark Office (USPTO) “refuses to register marks for goods and/or services that show a clear violation of federal law, regardless of the legality of the activities under state law.” That includes hemp CBD edibles, since, as USPTO explains,

The use in foods or dietary supplements of a drug or substance undergoing clinical investigations without approval of the U.S. Food and Drug Administration (FDA) violates the FDCA [Federal Food, Drug, and Cosmetic Act]. 21 U.S.C. §331(ll); see also 21 U.S.C. §321(ff) (indicating that a dietary supplement is deemed to be a food within the meaning of the FDCA). The 2018 Farm Bill explicitly preserved FDA’s authority to regulate products containing cannabis or cannabis-derived compounds under the FDCA. CBD is an active ingredient in FDA-approved drugs and is a substance undergoing clinical investigations.

It can be argued that the public interest is not well-served by the USPTO’s current stance. Ultimately, a product subject to regulation by a state government is much less likely to present safety issues than one subject to no regulation at all. At the very least, cannabis companies operating legally at the state level should be afforded some legal tools to defend themselves against counterfeiters of cannabis products, if only because by doing so they are also helping protect consumers.

Fred Rocafort is a former diplomat who joined Harris Bricken after more than a decade of international legal experience, primarily in China, Vietnam, and Thailand. This article originally appeared on the Canna Law Blog and has been reposted with permission.