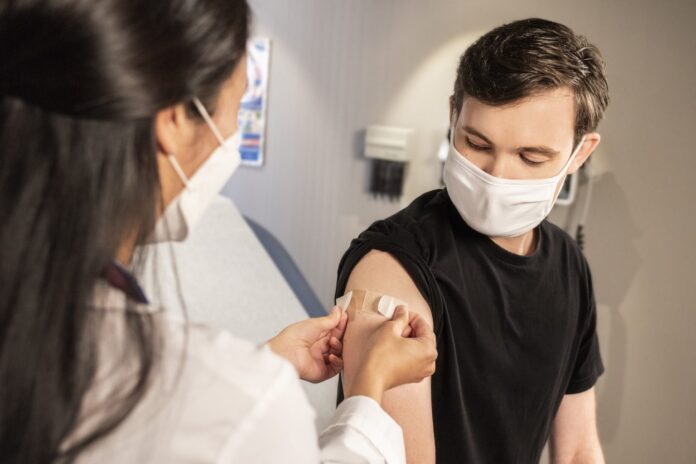 While reactions like headache and fatigue are expected when getting the COVID-19 vaccine, there are some rare ones that have also been reported. From allergic reactions to blood clots, these reactions are concerning, even if they’re highly unlikely. One of these includes myocarditis and pericarditis, conditions that result in heart inflammation.

According to former FDA commissioner Scott Gottlieb, one of the clearest ways to tell if you have this is if you lie down. “The signs and symptoms of pericarditis typically are a stabbing or a sharp chest pain that’s persistent. It’s positional. So it hurts more when you lay back,” he told CBS News.

RELATED: This Symptom Is Linked To Severe COVID-19 Cases In Men

“Sometimes it hurts when you take a deep breath because the pericardium, the lining of the heart, rubs against the chest wall, and it might be associated with a fever,” he said. In most cases, the appearance of these symptoms was relatively quick, “within probably the first two or three days, mostly after the second dose.”

These conditions express themselves through a variety of ways, with symptoms that include shortness of breath, stabbing chest pains, chest fluttering, and fever. While these symptoms remain unlikely, the CDC reports that they have been higher than expected in young adults.

Out of 20 million vaccinations, about 275 cases were reported amongst people between the ages of 16 to 24.

RELATED: Eating This Reduces Your Risk Of Heart Disease, According To Study

Due to how unlikely these side effects are, Gottlieb said that there was no reason why people should delay their vaccines. “I don’t think people should be nervous about it right now. I don’t think it changes the risk-benefit balance for this vaccine.”

It’s important to know that, as of now, there’s no way of knowing if the vaccine caused these heart palpitations. It’s possible that young adults developed their disease for other reasons, be that through other viruses or through the vaccine’s effect on people’s immune systems.