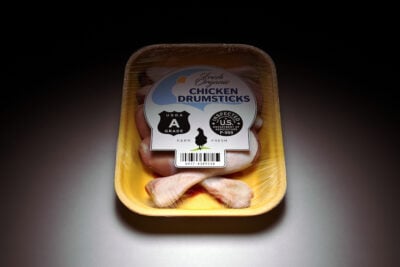 Americans who want to buy the safest chicken and turkey have had little to go on beyond brand names and labels.

But those don’t tell the whole story, as we learned from the readers who’ve used our Chicken Checker app.

Nearly 900 people submitted details about poultry packages they found in grocery stores across the country, including the P-numbers, which are typically printed on the packaging or price tag and identify where the meat was processed. Submissions covering all 50 states and Washington, D.C., showed that your organic chicken from Whole Foods might be processed in the same facility that processes conventional chicken sold at a Kroger. Sometimes, poultry with the same label comes from different plants with very different levels of salmonella contamination.

At the end of the day, there’s no label or certification that guarantees you’re getting poultry that would have only a less-risky strain of salmonella or that comes from a plant with a low salmonella rate.

The majority of chicken in the U.S. is processed by five companies: Tyson Foods, Pilgrim’s Pride (JBS), Sanderson Farms, Mountaire Farms and Perdue Farms. Similarly, there are three main processors of turkey, Butterball, Jennie-O and Cargill. These large processors typically control every part of production, from hatching to slaughter to packaging, but the supply chain is almost entirely opaque to consumers.

Submissions we received underscore the level of consolidation within the poultry industry — nearly 50 submissions were for chicken that traced back to just one Perdue plant in Delaware. In different packaging and under different branding, chicken from that plant appeared on the shelves of a Trader Joe’s in California, a Walmart in New York state, a Whole Foods in Louisiana and a Kroger in West Virginia, as well as in packages from the ButcherBox meat delivery service.

Look Up the Salmonella Rates Where Your Poultry Was Processed

Poultry products from the same plant weren’t necessarily raised with the same practices or on the same farms. Birds sold with specialty labels like organic, for example, are raised and processed separately from conventional birds, and equipment is sanitized between shifts.

Our information isn’t comprehensive, and it comes from a self-selected group of ProPublica readers — including one reader in Arkansas who submitted two dozen entries from local grocery stores — and from some freelancers who we hired to fill in regional gaps. But even this limited window helps us shine a light on a supply chain that has until now been largely out of view.

Here’s what we’ve learned about where your poultry comes from. (All the companies named here were asked to comment. If they did comment, their response is noted; if no response is listed, the company did not comment.)

Chicken parts from a Foster Farms plant in Fresno, California, appeared at stores up and down the West Coast and as far east as Wyoming and New Mexico. Chicken parts processed at the plant were found by federal regulators to carry a high-risk salmonella, which the Centers for Disease Control and Prevention says is more likely to make people sick. While the presence of salmonella doesn’t necessarily lead to illness — whether you get sick depends on the type and amount of salmonella in your food, the way it’s handled and cooked, and how your immune system responds — the bacteria hospitalizes and kills more people in the U.S. than any other foodborne pathogen. But the U.S. Department of Agriculture doesn’t currently differentiate between high- and low-risk salmonella when monitoring processing plants, and it doesn’t prevent raw poultry contaminated with salmonella from being sold.

… Even Within the Same Store.

At a Walmart in Little Rock, Arkansas, one reader found two different Cargill brands — Honeysuckle White and Honest Turkey, which is marketed as antibiotic-free — were processed in the same Springdale, Arkansas, plant. Ground turkey from that Cargill plant was found to have high-risk salmonella in 22.4% of samples over the past year.

Many Chains Get Their Store Brands From Multiple Plants.

Readers spotted the Trader Joe’s label on poultry from at least 15 different plants — some appearing to specialize in ground turkey, some in chicken parts, some in organic poultry and some in products with other specialized labeling — “heirloom” or “pasture-raised,” for example.

This means that salmonella rates can vary even between packages of the same product:

This pattern showed up at other grocery stores too. Some meat sold under Costco’s Kirkland Signature labeling came from Lincoln Premium Poultry, the company’s own chicken plant, while others came from a Tyson plant, a Pilgrim’s Pride plant and a Foster Farms plant that also processes organic chicken for Albertsons and Kroger store brands.

The chief operating officer of Lincoln Premium Poultry, whose plant had high-risk salmonella on 13.6% of its samples, said that the company and the USDA “have recognized that our business and the farmers who supply it have opportunities for improvement while we continue to operate, and Lincoln Premium Poultry has, with the aid of outside industry experts, been enhancing its processes accordingly.”

And Whole Foods appeared to source poultry for its 365 brand from at least six plants:

A Whole Foods spokesperson said that poultry sourcing varies by region and store, and said the company’s quality assurance team will continue to “review and assess” the USDA report for its suppliers.

Products from the same Perdue facility that produced Whole Foods-brand ground chicken also appeared at Kroger, Giant and Aldi supermarkets with standard Perdue branding, and at a Georgia Food Lion with generic branding.

A spokesperson for Giant Food Stores said, “The safety of the products we sell is our highest priority.”

A spokesperson for Perdue said that the company is committed to continuously improving poultry safety. “We maintain a stringent Pathogen Control Program throughout our operations,” a company spokesperson said, adding that salmonella sampling results have improved at some locations since the latest public data release by the USDA.

Stores Thousands of Miles Apart May Carry Meat From the Same Plant.

At the Cooks Venture plant, which is part of a startup project from Blue Apron founder Matthew Wadiak, the USDA found high-risk salmonella in 50% of ground chicken and on 16.7% of the whole chickens it sampled in the past year.

John Handley, Cooks Venture’s director of food safety and quality assurance, said the company believed that the USDA was sampling its whole chicken incorrectly, but that it has been working on improving sanitary protocols within the plant. “The modifications and enhancements made to our system have reduced the risk and incidence of salmonella occurrence,” he said in a written statement.

Under federal organic standards, poultry may not receive antibiotics, must be fed only certified organic feed and must be given “daily access to the outdoors.” Research has shown that the salmonella found on organic poultry might be less likely to be antibiotic-resistant, meaning severe illnesses caused by the bacteria may be easier to treat.

User submissions, however, showed that organic chicken may still come from plants with high salmonella rates: Organic ground turkey from a Plainville Brands plant in New Oxford, Pennsylvania, for example, appeared in stores such as Harris Teeter and Costco up and down the East Coast. The plant’s ground turkey had a high rate of high-risk salmonella and was also the source of a USDA public health alert for salmonella in April.

Readers submitted some packages with kosher or halal certifications, which indicate that an animal was handled in accordance with Jewish or Muslim rules for slaughter. That poultry can come from plants with a wide range of high-risk salmonella rates:

… But Salmonella Rates Don’t Tell You Everything About the Meat.

Perhaps you’re looking for brands that offer organic products, limit antibiotic use or prioritize animal welfare. A plant’s low salmonella rate may not be an indication of the quality of the meat or how the birds were treated, but rather its success with the chemicals it uses to process the chicken. Because USDA regulations focus on the plants instead of the farms — and treat all salmonella the same — many large processors have developed an elaborate system of antimicrobial washes. “The easiest way to bring down salmonella overall is to do chemical dips and sprays,” said Sarah Sorscher, a consumer advocate at the Center for Science in the Public Interest.

The most common disinfectant used is peracetic acid, known in the industry as PAA. While it’s washed off the chicken before it goes to stores, some worker advocates say it can be harmful to plant employees. That pressure has raised concerns in the industry about how much it depends on the chemical to reduce salmonella rates. “I think PAA will eventually be banned by OSHA or some other entity,” Robert O’Connor, a senior vice president at Foster Farms, said at a recent food safety meeting. “I think we are totally, completely reliant on that one compound in the plant, and we’re going to be really hurting when it does get banned.”

Regardless of the poultry you choose, it’s a good idea to treat all raw meat with caution. Make sure you’re following the CDC’s food safety recommendations. Don’t rinse your chicken or turkey before preparing it. Pay attention to what you’re touching as you prep your meat, and make sure to wash anything your hands or the raw poultry come into contact with — surfaces, cutting boards and sink handles. Always make sure to cook your poultry to an internal temperature of 165 degrees Fahrenheit.

Over and over, people reported struggling to find the plant identification number on their poultry’s packaging.

While the P-number is sometimes found near the USDA seal, it may also appear on the price tag or near the expiration date. One respondent noted that the plant’s number was stamped on the turkey’s metal clasp in such a small font that it was “nearly impossible to read.”

In some cases, people found that stores repackaged raw poultry and did not always transfer the plant number to the new packages. One reader reported success in asking for the plant number of a marinated chicken fillet from the butcher counter, as the information was not on the price label.

And, as many respondents noticed, if you’re purchasing turkey breast or leg cuts, you’re not going to find any turkey-part-specific information about salmonella — the USDA only conducts sampling on whole and ground turkey.

Readers Were Surprised to Find Out Where Their Poultry Came From.

One reader who purchased Draper Valley Farms’ Ranger brand chicken at a co-op in Washington state was surprised to learn from the Chicken Checker that she had bought meat from a major processor: “I had no idea that Perdue is now the owner of this property.”

Former Cargill executive Mike Robach told ProPublica that when companies acquire a poultry label, they often don’t change the name, as it already has brand recognition. “That’s what the consumer knows and is comfortable with,” Robach said.

That reader’s package of chicken breasts was processed at a Perdue plant in Mount Vernon, Washington, where 16.7% of samples had high-risk salmonella. All of the high-risk salmonella samples were resistant to at least one antibiotic that doctors frequently use to treat severe food poisoning.

Another user discovered that the store-brand organic chicken at Jewel-Osco supermarket in Illinois was processed by Perdue, writing that she planned to avoid the O Organics brand in the future. “I have never gotten ill from chicken purchased from this store. However I did not realize it came from Perdue.”

If you want to know more about where your chicken came from when you’re shopping for dinner, use the Chicken Checker!

Could Bobbie Hold 2 Spaceships Together in The Expanse?