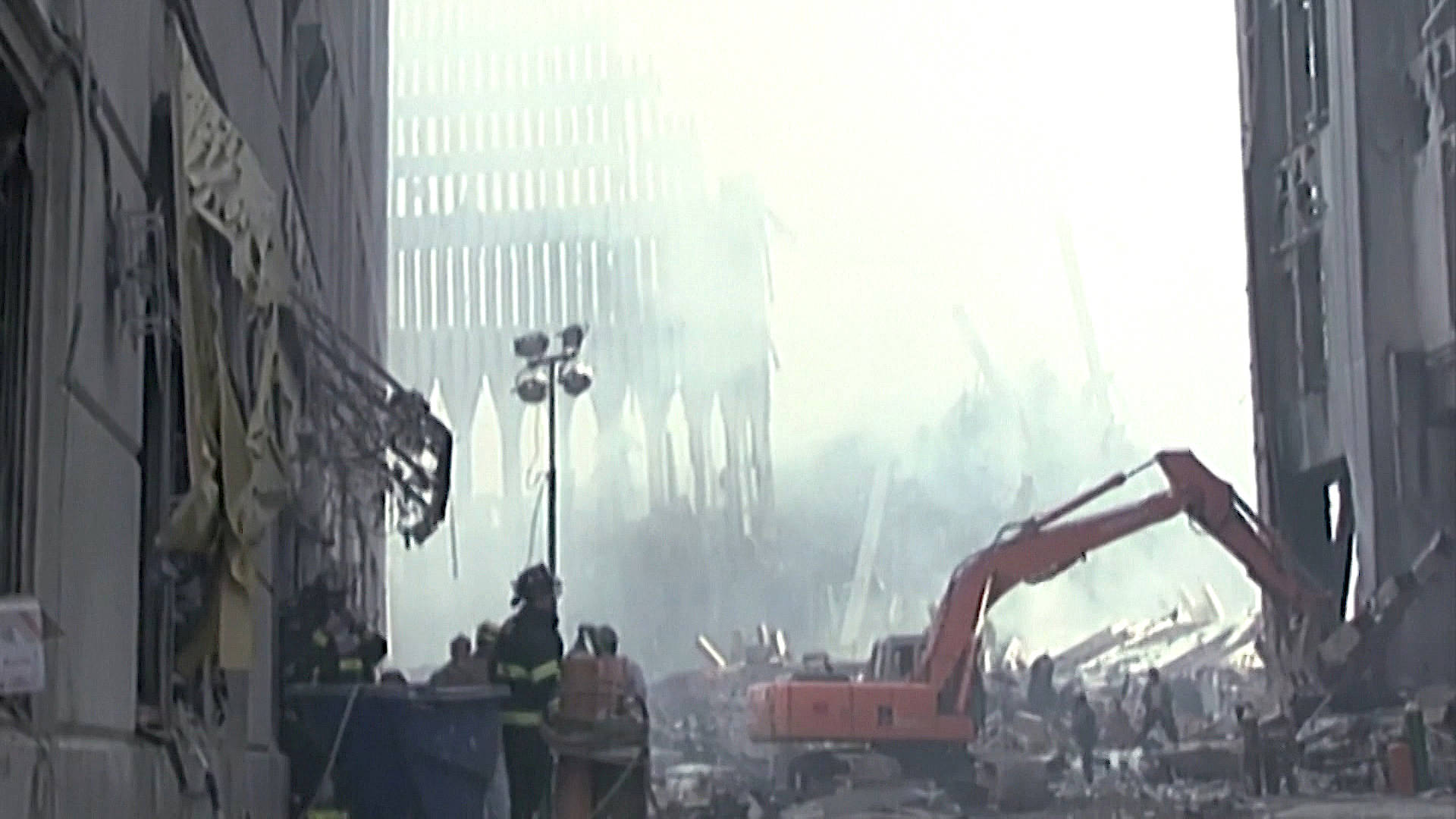 Yes, this past weekend marked the 20th anniversary of the 9/11 attacks that killed 3,000 people, September 11, 2001, including hundreds of immigrants who worked low-wage jobs, cleaning and restaurant jobs in the World Trade Center towers. As many as 6,000 undocumented immigrants later took part in the recovery and cleanup efforts.

Today we’re continuing our coverage of the impact of 9/11 as we look at those who went uncounted in death, as they go uncounted in life, because they were undocumented. Others feared deportation, didn’t seek medical help. This is Maria Penafiel, an immigrant from Colombia who helped in the cleanup efforts after the 9/11 attacks, speaking in the new documentary 9/11’s Unsettled Dust.

MARIA PENAFIEL: I was working at Stuyvesant High School. They don’t give the hazmat to wearing for cleaning. Most of the people cleaning around and cleaning in the building around the World Trade Center are undocumented. … When you speak about the trauma, for me it was terrible, because the day doesn’t finish.

AMY GOODMAN: You can see our full show on 9/11’s Unsettled Dust at democracynow.org, that also features the investigative work of our very own Juan González, who should have won a Pulitzer Prize for the investigation of what happened to so many as a result of the carcinogenic and deadly substances in the aftermath of the attacks that people inhaled.

Well, now some of the immigrant 9/11 responders and cleanup workers are calling for lawmakers to establish a pathway for legal residency, that could cover as many as 2,000 immigrants. Congresswoman Alexandria Ocasio-Cortez has said she is actively exploring the possibility of reintroducing a bill to do this, a bill that the man she beat for Congress, Joe Crowley, had introduced.

For more, we’re joined by Rosa Bramble Caballero, a licensed clinical social worker who’s helped immigrant 9/11 workers for 15 years and hosts meetings in the basement of her office in Queens.

Rosa, thank you so much for being with us. What should we understand? This whole idea that those who go uncounted in life go uncounted in death, maybe we don’t even know the exact number of people who died at the World Trade Center.

ROSA MARIA BRAMBLE CABALLERO: Yes. Good morning, Amy. Thank you for having me.

Actually, with the undocumented workers who worked at ground zero in the recovery efforts, many actually have died or have returned to their countries. And there’s really no record, because no one is really keeping record of these workers, who really sacrificed their lives, because as many people, many of us — right? — were in our homes and in our safety, they were out there cleaning up, exposing themselves to so many toxins. And they had a spirit of recovery. They wanted to be part of the effort.

And now, 20 years later, they’re pretty much left in the dark. Like one of the workers said, ”Estamos olvidados. Nos dejaron olvidados.” “We have been forgotten.” And because, after 20 years, many of them cannot work, and at least a status to citizenship would really not only acknowledge their work, but would also help them have other options of other types of work. Some of them have left their — have returned to their countries and have come back through the borders in order to be able to get medical monitoring, but they’re undocumented. And they were present in such a devastating day. And we have not really honored them as we should.

JUAN GONZÁLEZ: And, Rosa Maria, there were actually two categories of undocumented workers. There were those who were in the towers when the attack happened. There were many who worked, for instance, in the restaurants, at Windows on the World at the top of 1 World Trade Center. There were some that worked in maintenance of the buildings, as well, who were directly affected that day. But then, as you mentioned, also there were people that were brought in because every single building in Lower Manhattan had to be decontaminated or cleaned up after the attacks —

JUAN GONZÁLEZ: — from the contaminants. And the city of New York basically left it up to each individual landlord to do its own cleanup. Not any kind of checking or safety precautions were instituted. So, what has happened to both of these categories in terms of the compensation funds that have been set up? Are they eligible for them? Or, what has happened, as far as you know from the people you’ve talked to?

ROSA MARIA BRAMBLE CABALLERO: Yeah. So, I haven’t worked directly with the survivors, if you will, workers who were actually workers of the World Trade Center — say, the Windows of the World and so forth, or maintenance. My work has been primarily with those who worked in the recovery and cleanup efforts. And some of them have received compensation under the Zadroga law. But prior to that, they were — as you were saying, when, like, these were different buildings and they were trying to get compensation initially, a lot of that money, since they had to go to private attorneys, private attorneys took 33% of whatever little they were getting, and so they were pretty much left with really minimal income. And the group that was working as cleanup workers, under the James Zadroga Act, some of them have received funds. Some of them are still waiting.

And if you think about compensation, there’s one worker that I’m thinking about, in which his — after working there for so many months — and, by the way, the undocumented workers were the last group of people who worked in the zone, in ground zero. The recovery efforts ended in June 2002, and a lot of them remained there until June. So we’re talking about over six months of work. And this one particular worker, he received $52,000. And he basically cannot work anymore. First, he’s undocumented, but certainly, the GERD, the asthma, all the respiratory challenges that he has developed as a result — the compensation was $52,000, which he no longer has. He has a family to support. So, it’s not really — it doesn’t really — how should I say it? — really compensate for the efforts that a lot of them made.

Some of them have not received the funds. They’re still waiting. In fact, I spoke to a worker a couple of days ago who was affected by Hurricane Ida in Queens. A lot of our workers work in Jackson Heights, in areas where, for example, Joseph Crowley, and now Alexandria Ocasio-Cortez is now the Congress representative, that a lot of them have been affected. And she was telling me that after all of these years, she still has not received anything from the compensation fund. So —

ROSA MARIA BRAMBLE CABALLERO: — there’s not really enough effort anymore. We’re not getting an effort. We don’t hear anything. So, what I do is I still have people coming in, after all these years, Juan, who have been fearful, because of their immigration status, to come forth and receive medical monitoring, to come forth and apply for a compensation that they rightly deserve and ought to receive. And there’s still quite a few —

ROSA MARIA BRAMBLE CABALLERO: Yeah. You know, the bill, the 9/11 Immigration Worker Freedom Act, was introduced in 2017, and it was based on one of the workers who was detained by ICE. And we had a few Congress representatives who came forth, and the governor, to pardon him. And so, the bill was introduced. The bill really is a pathway to begin citizenship, that those who worked in the area, who were driving vehicles, have the right to readjust their status. And that’s really what we’re talking about, because, without that, these workers do not really have a life, and neither do their children.

We have workers who have died. And I’m thinking of Rafael Hernandez, who was a volunteer firefighter. And he rescued people on that day. He died in 2010. And right before, you know, we would meet, and we had empanadas, and he was telling me how ill he was feeling. And he died because of 9/11-related illnesses. His son, who is now in Mexico, is in college. He’s trying — he can’t even go to college, in fact. There is no funding. There is nothing available for the children of undocumented workers who died because they sacrificed their lives in this recovery effort.

I’ve reached out to different organizations — that I’m not going to name — and because the parent was undocumented, these children are not getting the support and help that they need. I have one family who had to move out of the state because the parent, he was so ill. And he’s alive, thank god, but he can’t really work anymore. And his children are struggling. He calls me, says, “Where can I get help?” You know, we try, at least through the standing organizations that ought to be helping the children of the 9/11 recovery workers, and no one is.

And I believe — we believe that with this bill, it would allow for these workers to not only help themselves, but certainly help their families, because, as immigrants, they’re here sacrificing their lives for their children, for their children to get an education and move ahead.

JUAN GONZÁLEZ: And, Rosa, just quickly, could you tell us how did you get involved? You’re a clinical social worker. You’ve been doing a lot of this out of your home. What prompted you to get involved in these efforts?

ROSA MARIA BRAMBLE CABALLERO: Right, Juan. So, it’s not out of my home; it’s out of my office. In 2006, a couple of colleagues and I were contracted, actually, by a subcontractor of the city to do outreach to Latinx immigrants who worked at ground zero, because many people were not coming forth. And so we did that. These ones ended. All of the funds ended. Mental health, a roundtable to help these folks — everything ended in 2010, precisely on the 10th anniversary of 9/11. OK.

And early in that year, a couple of previous clients called me and said, “You know, there’s nothing available now. We would like to meet. There’s no place for us to meet now. There’s no organizations helping us. Can you help us?” because at that point some of the compensation laws were starting to come forth, and, you know, navigating and just coming together to support each other. Many of them do not have families here, so really creating community. And, Juan, as an immigrant myself — I’m from Venezuela — I think of my mother, probably would have worked at ground zero if she would have had to. So, it’s really the commitment to my community that I felt that this is something I needed to do. And so I’ve been doing this as a volunteer for really all these years.

AMY GOODMAN: Rosa, I want to thank you so much for being with us. Rosa Bramble Caballero, bilingual licensed clinical social worker who’s helped 9/11 cleanup immigrant workers for 15 years, those cleanup workers in so much need. And to see more of her story and what she’s done, you can see this amazing film that’s aired on PBS called 9/11’s Unsettled Dust and our extended discussion on this last week at democracynow.org.