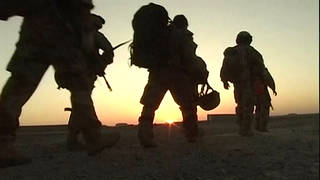 The Biden administration has unveiled plans to withdraw U.S. troops from Afghanistan by September 11, the 20th anniversary of the 9/11 attacks. The War in Afghanistan has killed more than 100,000 Afghan civilians and over 2,300 U.S. servicemembers and has cost the U.S. trillions of dollars. The announcement comes just a week before the scheduled start of a new round of peace talks in Istanbul between the Taliban and the U.S.-backed Afghan government, but the Taliban said it would boycott the talks because Biden is going back on a deal made by President Trump to have all U.S. troops out by May 1. Afghan American scholar Zaher Wahab says withdrawing is the right decision. “The United States and its allies should never have attacked and occupied Afghanistan,” Wahab says. “It was wrong. It was illegal. And I think it was immoral.” We also speak with Matthew Hoh, senior fellow with the Center for International Policy, who in 2009 resigned from the State Department in protest of the escalation of the War in Afghanistan. “This is a step that is necessary for the peace process to go forward, and that’s what the Afghan people desperately need,” he says. “It has been well over 40 years of fighting. Millions of Afghans have been killed or wounded. The devastation on the Afghan people is hard to imagine.”