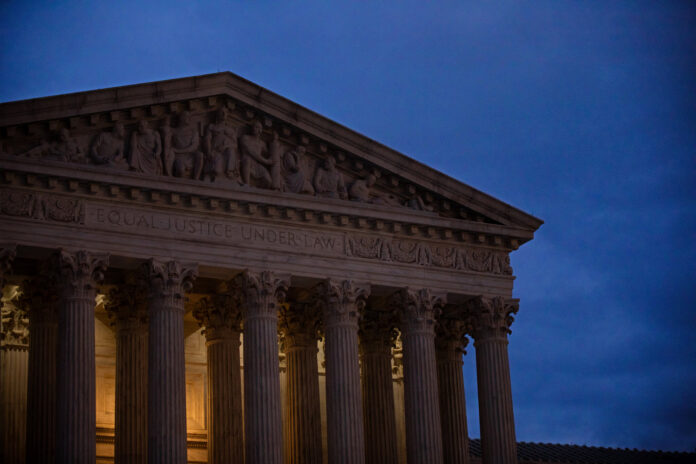 News broke earlier this week that progressive Democrats in the U.S. House and Senate are planning to unveil legislation to expand the U.S. Supreme Court by four seats, increasing the number of Justices to 13.

The reports follow an April 9 executive order from President Biden creating the Presidential Commission on the Supreme Court of the United States, “comprised of a bipartisan group of experts on the Court and the Court reform debate.” The group of legal scholars, former judges, lawyers, and judicial reform advocates, chaired by New York University and Yale law professors, is tasked with debating potential Supreme Court reforms such as term limits, the Court’s case selection, and the Court’s composition and size.

The nation’s highest court has been composed of nine justices since the 19th century, but no required number is specified in the Constitution.

After Sen. Mitch McConnell led successful efforts to block President Obama from filling a Court vacancy and rammed through the pre-election confirmation of Amy Coney Barrett last fall, Republicans and their allies on the Right now want to lock in their advantage by amending America’s founding document to preserve the Court’s current conservative 6-3 majority.

The American Legislative Exchange Council (ALEC), which called Barrett “tremendously qualified” for the Supreme Court in a letter of support to Congress, has deployed lawmakers to assist with the effort. ALEC is an ostensibly nonpartisan pay-to-play operation where legislators and corporate lobbyists meet behind closed doors to adopt model legislation on a broad range of public policy issues.

At its December 2020 States and Nation Policy Summit, ALEC board member and Indiana State Chair Sen. Jim Buck (R) introduced a model resolution calling on Congress to send to the states a constitutional amendment that simply says, “The Supreme Court of the United States shall be composed of nine Justices.”

Buck presented the resolution in front of lawmakers, lobbyists, and conservative nonprofits at the summit’s Federalism and International Relations Task Force meeting.

Since then, 21 states have introduced resolutions calling on Congress to pass the amendment, 16 of which were sponsored by ALEC-tied politicians, the Center for Media and Democracy has found. The resolution has passed both chambers in North Dakota, South Dakota, and Tennessee.

Given that Democrats control Congress, passage of SJR 9 is unlikely, so ALEC is concurrently pushing for the amendment to be included as part of its movement to radically rewrite the Constitution through an Article V convention of the states. Under Article V of the Constitution, amendments can be proposed either by two-thirds of both the House and Senate, or through a convention called for by two-thirds of state legislatures (currently 34 states). After adoption at a convention, any amendment must be ratified by three-fourths of the states (currently 38 states) before it can become part of the Constitution.

At the same ALEC meeting in December, Sen. Buck also introduced the “Model Application under Article V of the U.S. Constitution to Propose an Amendment to Require the Supreme Court of the United States to Be Composed of Nine Justices,” which provides state lawmakers with language to introduce in legislative sessions.

Legal experts note that there is nothing in the Constitution that limits the scope of a constitutional convention. They warn that a runaway convention could generate major changes to the balance of power between the states and federal government and undermine many rights and protections currently enjoyed by citizens of all states.

How Cannabis And CBD Can Help Eliminate The Stigma Around Mental...