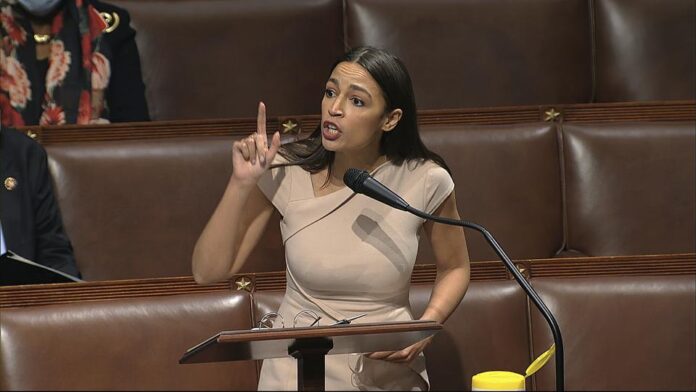 The bill is called the Green New Deal of Public Housing and is an arm of the larger Green New Deal (GND) package. It’s an updated version of the bill of the same name that the lawmakers introduced in 2019 to create jobs, retrofit public housing to be more energy-efficient and use clean energy to power the buildings.

This year’s bill, which is estimated to cost between $119 billion and $172 billion over the next decade, will stand in contrast to President Joe Biden’s proposal for public housing in his infrastructure bill. Biden calls for only $40 billion for public housing, and many Democrats, including Senate Majority Leader Chuck Schumer (D-New York), have called on Biden to spend more.

Ocasio-Cortez promoted the bill on Twitter, saying: “Today, we’re reintroducing the Green New Deal for Public Housing because — with millions on the brink of eviction, millions under/unemployed, and with a coming climate crisis — investing in our housing infrastructure has never been more important.”

“The Green New Deal for Public Housing was one of the first bills to take the three core elements of the GND resolution — jobs, justice, and decarbonization — and put it into bill text,” Ocasio-Cortez continued. The lawmaker says she, along with progressive allies like Rep. Cori Bush (D-Missouri) will be introducing two more bills related to the GND this week.

Advocates of the progressives’ public housing bill say that the bill’s investments are a necessary step toward dismantling racism and preventing the worst effects of the climate crisis.

“We need a massive federal investment that would finally provide American public housing communities with healthy, comfortable, energy-efficient homes — fighting racism, unemployment, the housing crisis, and the climate emergency at the same time and in the same places, and building out badly needed green community infrastructure,” wrote the Climate and Community Project, which released a report on the bill.

The bill seeks to electrify, remove environmental toxins like mold and lead, and generally repair the over 1 million public housing units in the country. It would also remove limitations on building more public housing as set by the Faircloth Amendment, which sets strict limits on how much affordable housing can be built.

The proposal also seeks to stimulate the economy. According to the report by the Climate and Community Project, the bill would create 166,000 to 241,000 jobs per year, many of them being high-quality union jobs.

The organization argues that the size of the investment is crucial to the bill and to any proposed improvements to public housing, as smaller investments would create more problems than they would solve for the residents of these homes and for the government, which has to continually spend money on replacing and fixing appliances and building materials bought on tight budgets that are “obsolete on delivery.”

“Today, public housing residents are exhausted and despairing at the low quality of work and materials used in the (extremely slow) maintenance of their homes,” the report’s authors write.

Ocasio-Cortez and Sanders’s proposal, on the other hand, would not only improve the quality of life of the people living in public housing but also help improve health outcomes. Eliminating mold and other toxins in these buildings would cut the rate of asthma among New York’s public housing residents by 18 to 30 percent, the report finds.

The bill’s introduction comes a day after other Democrats from New York have called on Biden to spend at least twice as much as the proposed $40 billion for public housing in his infrastructure bill. “Public housing has been neglected, left to get worse, and we’re not going to stand for it anymore,” said Schumer on Sunday.