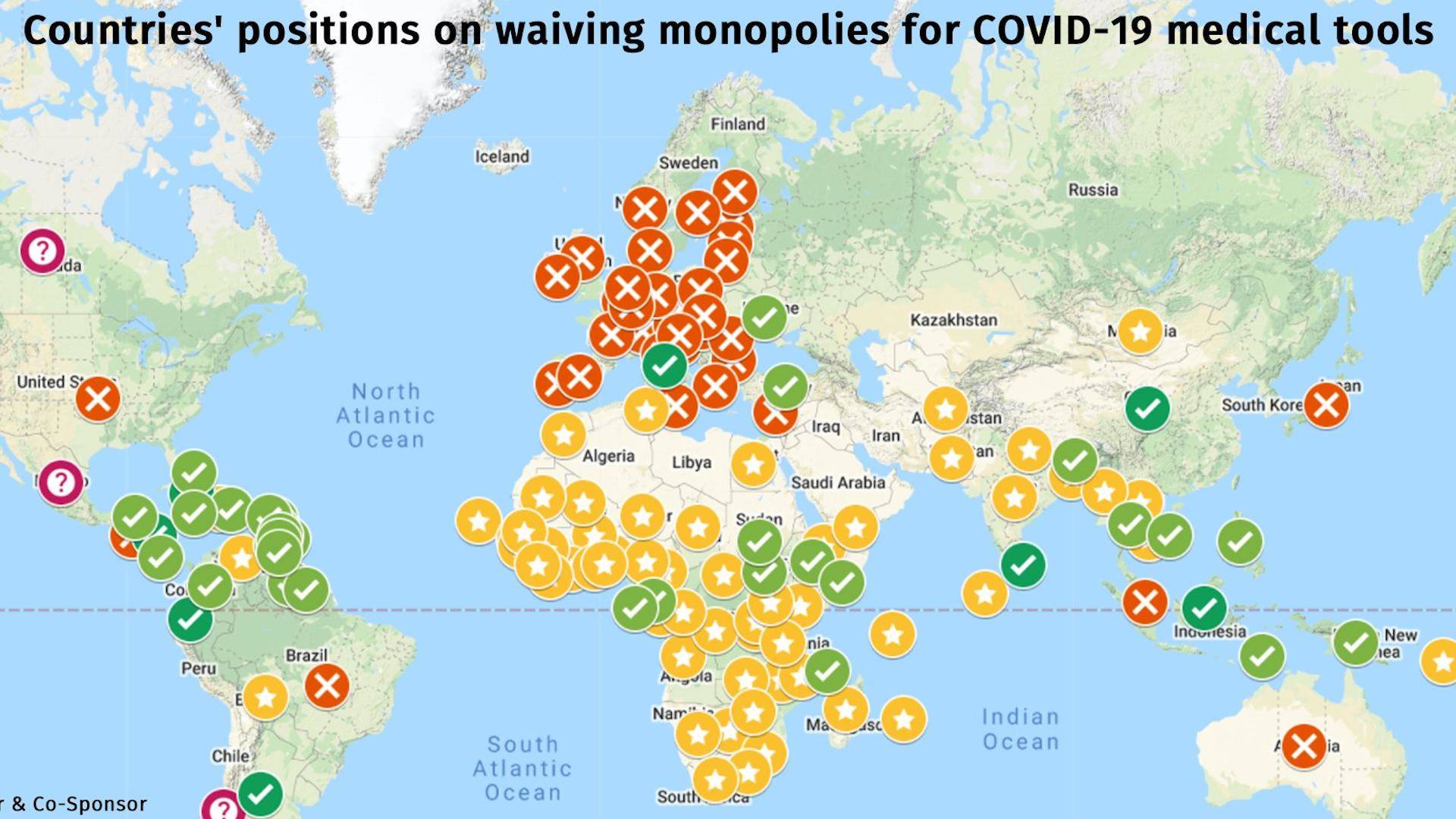 AMY GOODMAN: This is Democracy Now!, Democracynow.org, the Quarantine Report. I’m Amy Goodman. You can watch, listen and read transcripts using our iOS and Android apps. Download them for free from the Apple App Store or Google Play store today.

With India recording more than 10,000 deaths and a million new coronavirus cases over the past three days, the United States is facing increasing criticism for its refusal to back the lifting of patent rights on COVID vaccines. The World Trade Organization is holding key talks on the issue on May 5th.

For months, India and South Africa have led an effort for a temporary waiver of WTO patent protections which would allow private and public facilities around the world to mass-produce vaccines and related patent-protected items like syringes and personal protective equipment.

But the United States, under both Presidents Trump and Biden, along with a handful of wealthy countries, have been blocking what’s known as the TRIPS waiver. That stands for Trade Related Aspects of Intellectual Property Rights. On Sunday, Biden’s Chief of Staff Ron Klain appeared on CBS’s Face the Nation. He was asked by John Dickerson about Indian Prime Minister Narendra’s Modi’s call to lift the patent rights.

JOHN DICKERSON: But quickly, the prime minister asks the president to lift it, yes or no, will he? Or call for lifting.

RON KLAIN: Our U.S. trade representative, Katherine Tai, is going to the WTO next week to start talks on how we can get this vaccine more widely distributed, more widely licensed, more widely shared. We’re going to have more to say about that in the days to come.

AMY GOODMAN: Over the weekend, protesters staged a die-in outside the home of Senator Chris Coons, a close ally of Biden, the senator from Delaware, for opposing the patent waiver.

PROTESTER: —people who will die if they do not get access to the vaccine. We have the knowledge. We should be giving it to them.

AMY GOODMAN: There were also protests recently at the Gates Foundation in Seattle at the shareholders meetings, at Pfizer and Moderna in Boston and other cities. We are joined now by Lee Fang, reporter at The Intercept. He has been reporting extensively on the Biden administration’s close ties to COVID vaccine makers and to Big Pharma’s lobbying efforts to keep their patent rights. Lee, thank you so much for joining us again.

Why don’t you talk about the extent of the problem and why the U.S. is so central to getting vaccines out to the world, and why it is being so fiercely criticized in the developing world for standing in the way of Africa, Asia, Latin America getting vaccines?

LEE FANG: Amy, thank you so much for having me. The Trump administration, through Operation Warp Speed, provided $18 billion for the research and development of these vaccines. The largest vaccine makers rely on patents and other inventions owned and created by the U.S. government. Nonetheless, they control monopoly rights through intellectual property of these vaccines and they set the price. They control the capacity, the production, which partners to work with, and to whom they sell these vaccines. And of course, they prioritize the wealthy nations of the world—the United States, Canada, parts of Europe, Japan. They have gobbled up the available supplies.

Something like 1% of the vaccines that are being produced are going to the Global South, to the developing world. There’s a glut of vaccines going to these wealthier nations. Meanwhile, we are seeing increasing pandemics—spikes of the virus throughout Latin America, through India and other parts of the world. And we just simply have a capacity issue. We’re not getting vaccines out fast enough to poor nations, to low income countries.

To give you a picture of the disparity here, the state of Florida has received more vaccine than the entire continent of Africa through COVAX, which is the Bill Gates, U.S. government and WHO initiative to supply the developing world. So these initiatives that are based on voluntary agreements with the pharmaceutical companies have not worked. Meanwhile, wealthy nations, the pharmaceutical industry, have blocked efforts to allow these waivers that would expedite the production of generic vaccines so more factories can be retrofitted, so there could be more competition, so we could scale up supply of the vaccine for the developing world.

AMY GOODMAN: I’d like to turn to billionaire Microsoft founder and CEO Bill Gates, who has devoted much of his philanthropic work to global health issues. During an interview with Sky News earlier this year, he was asked directly whether it would be helpful to share vaccine technology. He said no.

BILL GATES: There’s only so many vaccine factories in the world and people are very serious about the safety of vaccines. And so moving something that had never been done, moving a vaccine from, say, a J&J factory into a factory in India, that, it’s novel. It is only because of our grants and our expertise that it can happen at all. The thing that’s holding things back in this case is not intellectual property. There’s not like some idle vaccine factory with regulatory approval that makes magically safe vaccines. You’ve got to do the trials on these things, and every manufacturing process has to be looked at in a very careful way.

AMY GOODMAN: So, that’s Gates. Can you respond?

LEE FANG: Well, Bill Gates is just simply wrong. There are idle factories around the world. We have reported on some of them. We’ve talked to factory owners in Canada. Reportedly, there are other factory owners in Bangladesh, India and across the world that stand ready to make generic vaccines. But Bill Gates is at the forefront of this effort to supply the developing world. The U.S. government has provided $4 billion to this initiative, COVAX, that’s founded by a group—funded by Bill Gates and associated with his Foundation. And Bill Gates has an ideological commitment to strong IP rights. It’s how he built his fortune at Microsoft.

But the big question here is, how do we scale up generic production? On one hand, you have folks like Bill Gates and the pharmaceutical industry that are fighting this waiver, fighting the effort to suspend enforcement of IP rights, saying that they won’t allow it. But on the other hand, they say that even if it’s lifted, nothing will happen. Well, you can’t have both ways here.

What needs to be done and what many activists are calling for, is not only lifting IP enforcement, allowing this TRIPS waiver, but pushing the pharmaceutical industry, pushing the experts involved to go out and teach the methods to make sure we do have safe methods for producing these vaccines, to retrofit these factories. Because time is of the essence. This could have been done last year. But we’re losing time, and we need to scale up factories to produce more generic vaccines.

AMY GOODMAN: Lee, can you talk about your reporting on the Biden administration’s ties to the vaccine makers? You’ve got White House adviser Anita Dunn, cofounder of the consulting firm SKDK, which works closely with Pfizer. Biden’s domestic policy advisor, Susan Rice, holds up to $5 million in Johnson & Johnson. White House Science Advisor Eric Lander holds up to a million dollars in shares of BioNTech, which codeveloped Pfizer’s coronavirus vaccine. Then there’s the Albright Group that many in Biden’s inner circle come from and who she and that group represents.

LEE FANG: That’s right. The pharmaceutical industry is one of the biggest spenders on lobbying in Washington. And there are many conflicts of interest throughout the Biden administration. You just named several of them. The fact that the number three, four undersecretaries of the State Department were at a consulting firm, Albright Stonebridge Group, that represented Pfizer. Anita Dunn, she is not someone who is mentioned a lot in the media recently but she’s one of the closest advisors to the Biden administration. She was the de facto campaign manager for his presidential campaign. Her consulting firm represents Pfizer and engages in a lot of the PR and advertising for that firm.

These are serious conflicts of interest, and they deserve some scrutiny given the fact that Pfizer is looking at this product, this vaccine, as its massive moneymaker. One estimate shows that Pfizer’s coronavirus vaccine under even the kind of negotiated prices that are deeply discounted this year for U.S. consumers, that will bring in something like $15 billion a year, making it one of the highest grossing pharmaceutical products of all time. And they’re already talking about raising prices. So Pfizer, Moderna, Johnson & Johnson, they have so much money at stake. They are leaning on lobbyists, they’re leaning on former Democratic aides and on potentially some of these folks who they have ties with in the White House, to push back on any effort to allow a generic vaccine.

AMY GOODMAN: Lee, you even mentioned that Hollywood is joining in against waivers for intellectual property.

LEE FANG: That’s right. One of the aspects of the TRIPS waiver that has been requested by India and South Africa is a temporary suspension of copyright related to the pandemic. That comes down to allowing a lot of countries that have very stringent copyright enforcement—in many countries, you can’t use AI to research copyrighted material. Hollywood has always taken a maximalist position on copyright enforcement, so they have even joined the pharmaceutical industry in fighting this waiver.

AMY GOODMAN: We’re going to continue to investigate this. Lee Fang, investigative journalist at The Intercept. We will link to your articles on this subject. That does it for our broadcast. I’m Amy Goodman. Stay safe. Wear a mask.