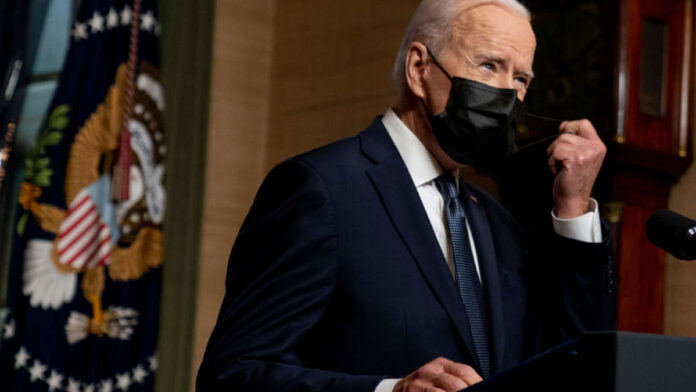 President Joe Biden is expected to propose nearly doubling the capital gains tax rate for people making over $1 million a year in order to fund aspects of the second half of his two-part infrastructure package.

The proposal from the White House, expected to be officially announced next week, aims to increase the capital gains tax to 39.6 percent for wealthy earners, up from its current rate of 20 percent.

During the 2020 presidential campaign, Biden campaigned on proposals to increase taxes on capital gains, derived from income on things like investments that many wealthy individuals receive, so that they would equal taxes on incomes made primarily from labor. Currently, those who receive income from investments are taxed at a much lower rate than those who are taxed for work.

The Biden White House is also considering increases on the estate tax for the wealthy, and has proposed raising the corporate tax rate from 21 percent to 28 percent — still significantly lower from the 35 percent rate that Republicans slashed in 2017. These tax increases will go toward funding the first half of the infrastructure package, which includes more “traditional” infrastructure projects like repairs to roads, bridges, rail and expanding broadband internet.

Revenues generated from the increased taxes on capital gains would help pay for the second half of the infrastructure plan Biden is proposing, dubbed the American Family Plan. This part focuses on spending $1.5 trillion on social projects, including lowering child care costs, creating universal prekindergarten across the country, making community college free and establishing a national paid leave program, among other initiatives.

Such programs could help bolster work on the more traditional infrastructure projects as they allow working-class Americans the opportunity to get back into the workplace or advance their own career paths.

The plan to raise taxes on the wealthy, a policy that the vast majority of voters in the U.S. support, faces stiff opposition from Republicans in Congress, creating roadblocks to passing the bill. Republicans have instead introduced a basic outline of their own infrastructure plan, in the form of a two-page “breakdown” on projects they want to prioritize.

Their proposal, which costs $568 billion over five years, has zero spending on social projects that would help workers and spends significantly smaller funds on some of the projects that Biden’s plan includes. For example, while the Republican plan includes $35 billion for “drinking water and wastewater” initiatives as well as $14 billion in water storage projects, the White House is proposing $111 billion in clean water and drinking water plans. That includes a goal to remove 100 percent of lead service lines throughout the country, which the Republicans’ plan doesn’t mention and would likely not provide sufficient funding for.

The plan by the GOP would also not raise any taxes on the wealthy, keeping in place the Trump tax cuts that resulted in an estimated $1.9 trillion in lost revenues. Instead, Republicans aim to repurpose “unused federal spending,” which will likely mean cuts to other services, as well as user fees on thing such as electric vehicles, gas or flights. Unlike Democrats’ tax hikes on the wealthy, Republicans plans for user fees shift the tax burden to the lower and middle class.

Democrats have blasted Republicans’ proposal as doing too little to address the country’s needs.

Sen. Elizabeth Warren (D-Massachusetts) agreed, stating that the GOP proposal “does not meet the moment,” Politico reported. “We have underspent for generations now. And it shows in our airports, on our roads, in our mass transit, in our rail,” Warren said. “The Republicans are not willing to make the investments we need.”