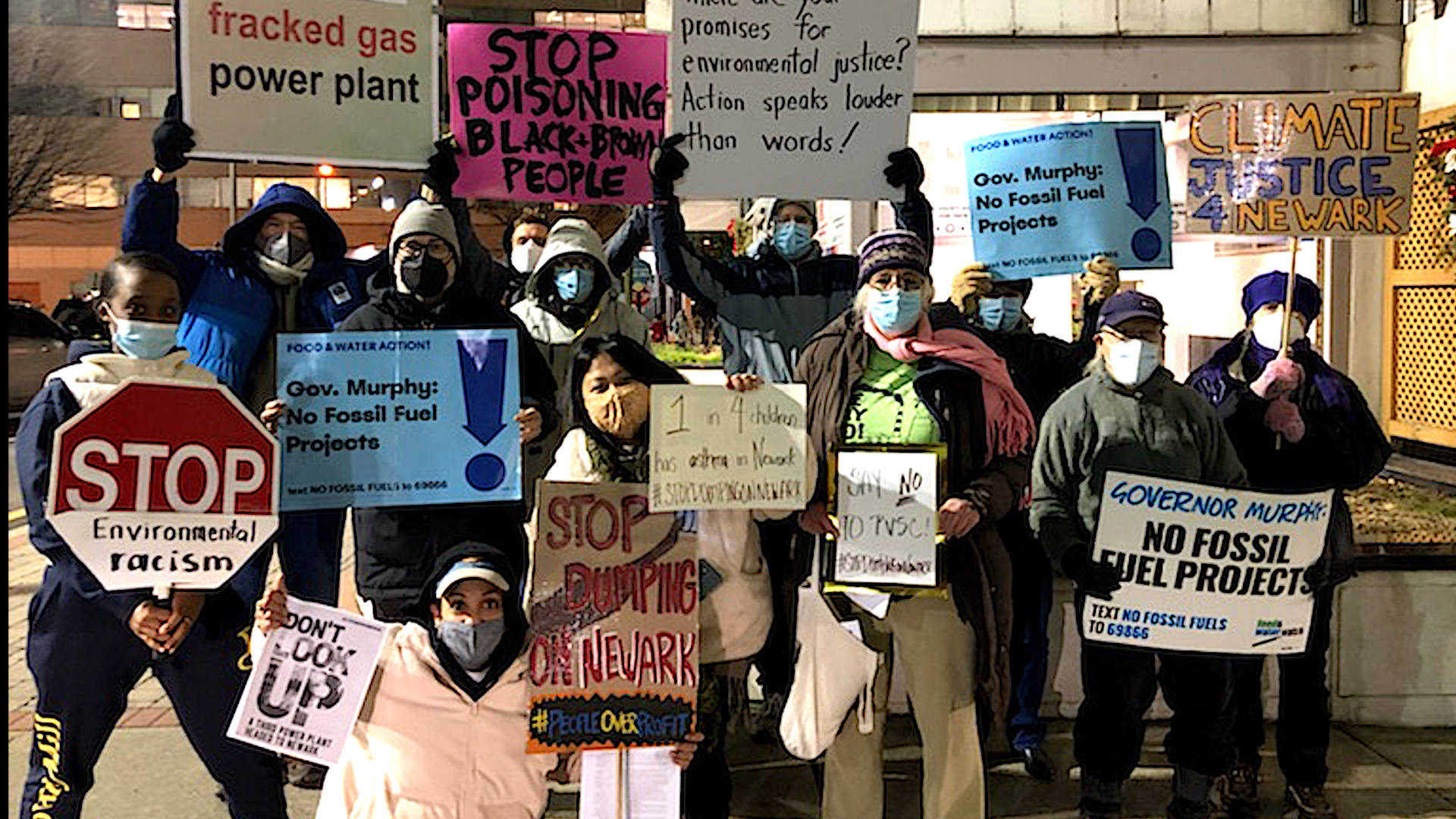 AMY GOODMAN: This is Democracy Now! I’m Amy Goodman, with Juan González, as we end the show in New Jersey, where residents of the largely Black and Latinx community in the Ironbound section of Newark are calling on the governor to stop a plan to build a new gas-fired power plant that could worsen already poor local air quality.

AMY GOODMAN: A key vote on a contract to build the new power plant is set for Thursday. Activists say approving contract would go against vows New Jersey Governor Phil Murphy made when he signed one of the country’s strongest environmental justice laws in 2020.

GOV. PHIL MURPHY: Residents in our environmental justice communities, who are predominantly people of color, have suffered from adverse health conditions at rates many times that of residents elsewhere, as the impacts of decades of prior health and economic disparities have been exacerbated. And we know that this virus has been particularly worse for those with underlying health conditions. So it is important to this moment that we send the message that no longer will economically disadvantaged areas of our state be dumping grounds, and no longer will the rights of residents to clean air and clean water be overlooked.

AMY GOODMAN: The power plant’s backers say it’s needed as a backup source of power for a massive nearby sewage treatment facility that leaked sewage during Superstorm Sandy in 2012 after losing power. But critics say the plant would run on fracked gas, and its carbon emissions would actually contribute to stronger and more frequent extreme weather.

For more, we go to Newark to speak with Maria Lopez-Nuñez, deputy director of organizing and advocacy at the Ironbound Community Corporation, also a member of the White House Environmental Justice Advisory Council.

Welcome to Democracy Now!, Maria. You pushed for this law that Governor Murphy is talking about. Explain what’s at stake in this vote tomorrow.

MARIA LOPEZ-NUÑEZ: Absolutely. And thank you for having me.

You know, and it wasn’t just me that pushed for this law; it was communities across New Jersey, who have been dumped on, way before Murphy, for decades, by Republican and Democrats. Our communities have been used as sacrifice zones, where — you know, just to step back here, in the Ironbound, we already have three power plants, three Superfund sites, fat rendering. You know, you name it, it’s probably in our neighborhood. We have thousands of trucks, that serve New York City and the greater metropolitan area, that barrel through the neighborhood to deliver things, putting that diesel pollution into the air.

So, we’ve always known we need to look at the whole picture. It’s why we pushed to have an environmental justice law that would give the Department of Environmental Protection the ability to deny permits based on this thing called cumulative impacts. And every time I explain it, it’s so sad, right? Because any government agency, they’re not allowed to look around. They have to treat industry as individuals. You know, how much do you pollute? How much do you pollute? And never adding the equation. And I would say a fourth-grader — you know, a 4-year-old could stand on a street corner in Newark and look at the smokestacks and say, “You shouldn’t add one more.”

So, what’s at stake tomorrow is we passed this beautiful law. It’s not yet effective. And we’re having a fourth power plant that’s being proposed. And so, on Thursday, they’re trying to vote to start the construction of this power plant.

JUAN GONZÁLEZ: And, Maria, what is the agency that is going to be meeting? And what can people who want to oppose this action do?

MARIA LOPEZ-NUÑEZ: Absolutely. The agency is going to be the Passaic Valley Sewerage Treatment Commission, right? They actually serve New York City and 11 states, so this is beyond New Jersey. And we’re asking Governor Murphy, actually, because we don’t believe the commissioners will vote no. We think that Governor Murphy needs to use his moral authority, step in and be an example for the country that when you pass a law, you make sure that that’s when the buck stops and that we start denying facilities from coming in, especially public utilities from continuing to dump on Newark. So, we’re asking people to call Governor Murphy directly and say to protect law and to protect environmental justice, because if we don’t set a good precedent in New Jersey, what does that mean for the country and other states that are trying to pass similar laws? It really takes the wind out of your sails to see New Jersey fail like this.

JUAN GONZÁLEZ: And you mentioned the history, especially in Ironbound, of pollution. For those viewers and listeners who are not aware, could you give us a quick summary of some of the historical problems that Ironbound has faced?

MARIA LOPEZ-NUÑEZ: Absolutely. We are a four-square-mile neighborhood, and we’re home to three Superfund sites. During the Vietnam War, in the Ironbound, we had the largest production of Agent Orange. And it had a byproduct, dioxin, which is incredibly cancer-causing. That was being dumped into the river. The white powder from that went all over our neighborhood, polluting our pools. We’ve had pools, outdoor pools, that had to be closed down because some of my colleagues were swimming in dioxin — right? — people who lived in this neighborhood. This was declared an emergency zone.

We have the region’s largest garbage incinerator. Fifty percent of the trash for that garbage incinerator comes from New York City, and it burns over a million tons of trash a year. You know, we have three power plants. We have this sewerage commission that’s the largest in the state, and it’s the fifth largest in the country. We have the Port of Newark — right? — that serves all of New York City, the whole metropolitan region. Eighty percent of the consumer goods come out of that port. And most of them get loaded onto trucks, that barrel diesel pollution. And all of that, I’m just talking about my neighborhood; I’m not talking about the whole city. The city of Newark is also equally dumped upon. And so, we’re talking about decades of environmental racism affecting our community.

AMY GOODMAN: In fact, Maria, you have already the longest Superfund site in the country in that little area you’re talking about of Ironbound. And talk about the community that lives there.

MARIA LOPEZ-NUÑEZ: Absolutely. It’s 17 miles of a polluted river, you know, and we’ve been fighting for decades to reestablish our relationship with the river. And our community is majority Black and Latinx, working-class, immigrant community, that’s deeply affected by the issues. And despite all of our socioeconomic issues, immigration issues, housing issues, we still fight to make sure that we’re bettering our neighborhood. You know, we helped build a park along that river. We have a vision for our community. And that’s all we’re asking for, is not anything extra. We’re just asking for a chance to fight for clean air and clean water.

AMY GOODMAN: New Jersey already facing a threat from sea level rise double the global average. And Amazon — is it true — is proposing an entire new terminal at Newark airport that you’re fighting?

MARIA LOPEZ-NUÑEZ: Absolutely. We’re fighting what we call a secret hub, right? Amazon didn’t talk to the community, didn’t talk to our municipality about it. Port Authority, which is an authority shared with New York and New Jersey, had a vote that appeared halfway through the meeting to authorize this proposal from going through. Again, like, our community — and this is why so many communities —

AMY GOODMAN: Well, we’re going to have to leave it there, but we’re going to come back to this, Maria Lopez-Nuñez with the Ironbound Community Corporation. That does it for our show. I’m Amy Goodman, with Juan González.