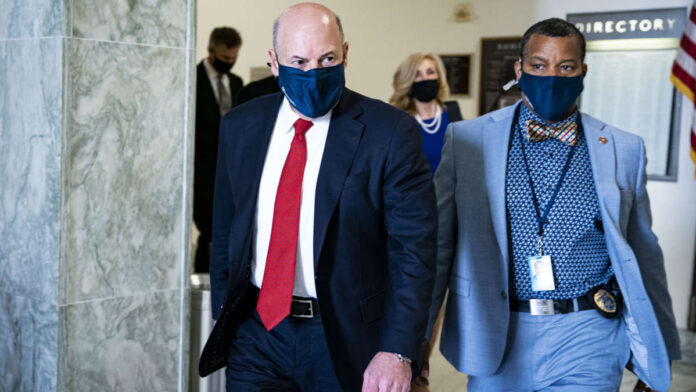 The Federal Bureau of Investigation (FBI) is investigating Republican campaign donations in connection to Postmaster General Louis DeJoy and his former company.

As first reported by The Washington Post, FBI agents have been looking into campaign contributions potentially made by people currently and formerly employed by DeJoy. Sources told the publication that investigators have also issued a subpoena to the embattled postmaster general in connection with the donations.

The investigation follows another Washington Post report from September that, if true, could mean that DeJoy used potentially illegal methods to fuel his rise as a GOP fundraiser. Former employees of New Breed Logistics, which was bought by XPO Logistics and which DeJoy led for over 30 years, told The Post that DeJoy’s aides and sometimes DeJoy himself would pressure employees to donate to Republican candidates. They would then be reimbursed in the form of bonuses, the former employees said.

“He would ask employees to make contributions at the same time that he would say, ‘I’ll get it back to you down the road,’” one former employee told The Washington Post.

Such a donation and reimbursement scheme would be illegal, according to laws prohibiting the use of “straw donors.”

The former employees also reported being urged to attend fundraisers DeJoy held at his mansion in Greensboro, North Carolina, where GOP candidates running for federal office sometimes raised $100,000 or more.

A spokesperson for DeJoy denies the allegations, and the postmaster general has previously denied them himself in one of the many congressional hearings in front of which he’s been called to testify, calling the allegations “outrageous.”

House Oversight Committee Chair Rep. Carolyn Maloney (D-New York) has said, however, that if he did participate in the straw donor scheme, he may have lied to Congress in that testimony. “If these allegations are true, Mr. DeJoy could face criminal exposure — not only for his actions in North Carolina, but also for lying to our committee under oath,” said Maloney in a statement in September.

The Campaign Legal Center (CLC) filed a complaint with the Federal Election Commission against DeJoy after the allegations came out last year on the supposed straw donation scheme, saying that “DeJoy appears to have violated federal campaign finance law by obscuring from the public the true source of more than $1 million in campaign contributions.”

CLC says it found several cases in which XPO Logistics employees and DeJoy’s family members donated large sums of money to the same candidate or committee in the same period of time between 2015 and 2018. $50,000 went to Donald Trump’s fundraising committee, Trump Victory.

“These are serious violations, and we are pleased that CLC’s research and complaint triggered the Department of Justice to investigate,” Brendan Fischer, CLC’s director of federal reform, said in a statement, per USA Today. “We need a stronger FEC to enforce campaign finance laws and hold political candidates and their donors accountable.”

In DeJoy’s short tenure at the head of the United States Postal Service (USPS), reporters have uncovered a number of questionable actions taken by the postmaster general. Last year, he faced scrutiny over his continued stake in XPO Logistics, which is a contractor with the USPS. He’s also faced accusations of shady dealings over a $54 million stock purchase into a company that, just hours later, DeJoy announced would be manufacturing trucks for the USPS over the next decade.

DeJoy has faced calls for resignation for a year, ever since he began gutting the postal service from the inside out, seemingly in an attempt to help President Donald Trump cast doubt into the legitimacy of mail-in voting. Some commentators renewed that resignation call after news of the FBI investigation broke.

Yet although President Joe Biden’s Democratic nominees to the postal board have been confirmed and Democrats theoretically have enough votes to remove DeJoy, there are doubts as to whether the postal board will vote to do so. The chairman of the board is a Trump-appointed Democrat who has recently expressed strong support for the postmaster general.