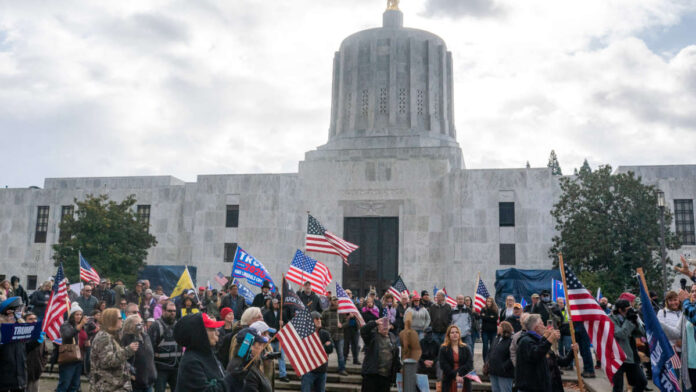 Nearman must now pay a $2,700 fine, perform 80 hours of community service and is banned from entering the state Capitol grounds for 18 months. The fine is meant to pay for damages done to the building. The Republican was expelled from office in June for allowing the mob into the state Capitol.

The statement is clearly confounding after Nearman’s guilty plea earlier that day, and the video footage of Nearman allowing the QAnon-affiliated supporters into the building is clear cut and damning. Though the former lawmaker said on the radio show that he pleaded guilty in order to avoid a long and expensive court battle, his motivations for denying fault may have more to do with his political career than legal consequences he might face.

In court, Nearman revealed his true intentions for letting the mob into the building: he told the judge that he believed it “would make me appear favorable to certain citizen groups,” reports The Oregonian. Those groups, presumably, would be the QAnon mob and other far right conspiracy peddlers who were behind the protests that day.

The group had been outside the Oregon Capitol in December protesting coronavirus restrictions that barred the public from entering the building. Some of the individuals were armed, and they had wanted to occupy the Capitol.

After Nearman opened the door to the mob, they clashed with police, trying to shove their way in and using bear spray against the officers. Lawmakers from both parties condemned Nearman’s actions when voting to expel him.

“The facts are clear that Mr. Nearman unapologetically coordinated and planned a breach of the Oregon state Capitol,” Oregon Democrat and House Speaker Tina Kotek said. “His actions were blatant and deliberate, and he has shown no remorse for jeopardizing the safety of every person in the Capitol that day.”

The Republican leader of the House agreed, saying that there could “easily have been a death on that day.” Nearman was expelled 59 to 1, with Nearman being the only opposing vote.

The facts of Nearman’s case echo that of January 6, when a violent Donald Trump-supporting mob shoved and fought their way into the U.S. Capitol. Then, too, the mob chanted conspiracy theories fueled by Trump and the far right, clashed with police and called Black officers racial slurs. The January 6 attack happened just over two weeks after Nearman let the far right mob into the Oregon Capitol.

The judge in Nearman’s case said that she was listening to testimony from Capitol Police officers on her way to the courthouse on Tuesday. Officers testified in front of the House committee to investigate the January 6 attack. They expressed anger that Republicans like Rep. Andrew Clyde (R-Georgia) — who said, and still defends, his statement that the attack was a “normal tourist visit” — continue to deny the severity of the attack.

This, again, is similar to Nearman stating that he didn’t believe he did anything wrong. And the congressional Republicans’ motivations for denying the gravity of the attack and the subsequent deaths are likely similar to Nearman’s: gain support with far right QAnon and conspiracy theory believers who want the violence downplayed, perhaps so they can do it again.