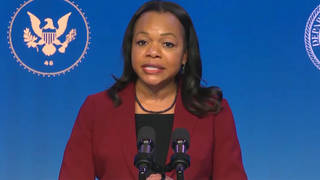 We look at President Biden’s nomination of Kristen Clarke to become the first Black woman to lead the Justice Department’s Civil Rights Division and the conservative smear campaign against the veteran civil rights lawyer. The far-right Fox News host Tucker Carlson has devoted at least five segments to attacking Clarke’s nomination, including baseless accusations of anti-Semitism. Ben Jealous, president of People for the American Way and former president of the NAACP, says “the right-wing attack machine” springs into action whenever Black nominees are up for confirmation. “They make sport, quite frankly, of trying to defame their character, destroy their reputation, and they see women of color as being very vulnerable,” says Jealous. He also addresses the state of police-community relations in the U.S. and efforts to stop police impunity for killing Black people.