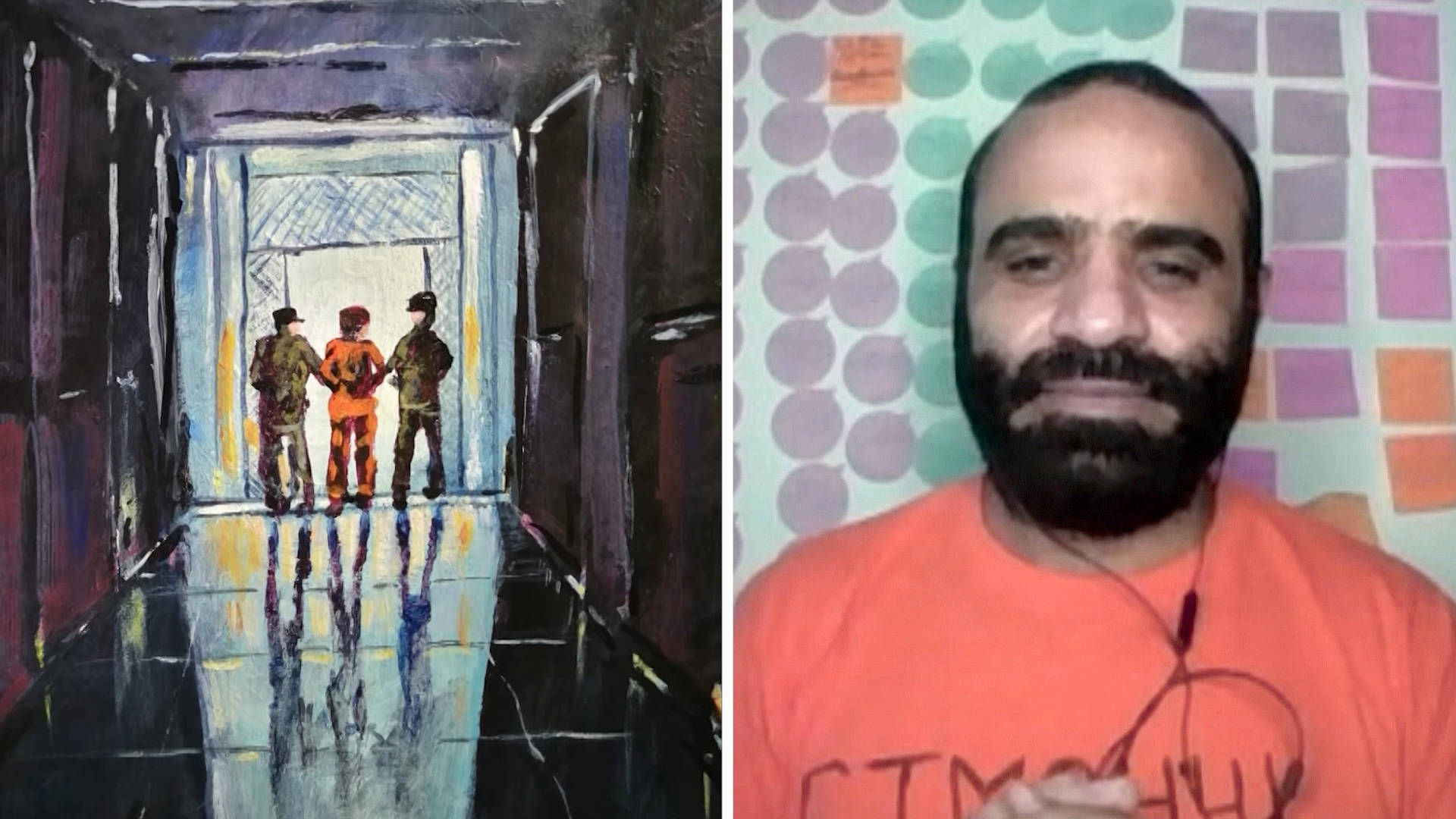 AMY GOODMAN: This is Democracy Now!, democracynow.org, The War and Peace Report. I’m Amy Goodman, with Juan González, as we continue to mark the 20th anniversary of the opening of the U.S. military prison at Guantánamo, where there are still 39 men being held, at the cost of something like more than $13 million per prisoner per year that the U.S. taxpayers are paying for.

We’re joined now by Mansoor Adayfi, or, as he refers to himself, Detainee 441. At the age of 18, he left his home in Yemen to do research in Afghanistan. Shortly before he was scheduled to return home, he was kidnapped by Afghan warlords, sold to the CIA for a bounty after the September 11th attacks. He was jailed and tortured in Afghanistan, then transported to the U.S. military prison at Guantánamo in 2002, where he was held without charge for 14 years, many of those years in solitary confinement. In 2016, he was released against his will to Serbia, which he compares to Guantánamo 2.0. He’s now the Guantánamo project coordinator at CAGE. We first spoke to him last year after he published his memoir, Don’t Forget Us Here: Lost and Found at Guantánamo. We spent the hour with him. He’s joining us now from Belgrade. Also still with us is captain, former Army chaplain at Guantámo, James Yee. Mansoor wrote a letter to James Yee when Mansoor was still in prison at Guantánamo.

Mansoor, welcome back to Democracy Now! It’s good to have you back with us.

AMY GOODMAN: Can you briefly tell your story and what you think is important to raise now, 20 years after Guantánamo was opened, 20 years to this day?

MANSOOR ADAYFI: Thank you, Amy, again, for having me. And I would like to call you Auntie Amy.

You know, I have today important message for Americans. I would like — I wish, if George W. Bush and his gang was with us today, to have a friendly conversation. You know, what is America? From my perspective, America is not the nuclear arsenal. It’s not the military power, economic power. It is a set of values, that founded — founded by the Founding Fathers.

So, 20 years now we are talking about Guantánamo. We are talking about 20 years of indefinite detention, 20 years of torture, 20 years of injustice, 20 years of failure of and abuse to the American justice system. You know, it’s not about the detainees. It’s not about the place. It’s about us as a human being, as humanity. So, today I’m so sad. You know, we are still talking about closing that detention. And even the Democrats, which actually they always clean the mess of the Republicans, they both played game political with Guantánamo. The Republicans use it for political gain, and the Democrats playing the game of, like, afraid to close Guantánamo because they’re going to be blamed and so on. It needs a decision and will to close it. And I think Biden can close it. And it is simple: Apply justice to Guantánamo.

JUAN GONZÁLEZ: Mansoor, I wanted to ask you not just about the 39 prisoners who still remain in Guantánamo, but the hundreds like you who were never charged and never convicted of any crime and then were sent not back to their home countries but to a third country that you had no knowledge of before. How has life been like for those men who are, in essence, stateless at this point?

MANSOOR ADAYFI: Yes. You know, releasing from Guantánamo is supposed to be a resettlement agreement between the United States government and the hosting countries. And as Chuck Hagel said in his interview in 2017, the Americans handed a budget for each country, and they’re demanding from rehabilitation and reintegration. That was supposed to happen, but that never happened.

When we were released in Guantánamo, some of us were released against our will to countries where we have no knowledge, you know, away from our families, culture, language and everything. Those countries, you know, when I did my research for my thesis for my university last year about rehabilitation and reintegration of former Guantánamo detainees, I found out there wasn’t any kind of rehabilitation and reintegration program. It depend on the hosting countries. Some of the released prisoners who were relocated in Oman, Qatar, Allemagne, or Germany, or Holland, they are doing well. I mean, the countries, those countries, actually help them and support them to integrate into the society. But countries like Eastern Europe, Serbia, Albania, Kazakhstan, Senegal and other countries, people face many difficulties and challenges. Some of them still live in limbo, no legal status. Some of them end up dying, losing their life. Some of them are being threatened to be deported.

And basically — and some of them actually spend, for the last five years in the United Arab Emirates — one of the worst cases, after release from Guantánamo to United Arab Emirates, finding themselves spending five years, they were released just two months ago, after they were hospitalized from coronavirus. The United Arab Emirates, they didn’t want anyone to die there, so they just shipped them to Yemen without any coordination with their families or government or lawyers or NGOs. And when the released prisoners arrived in Yemen, some of them, in less than 24 hours, they were kidnapped by Houthis and imprisoned for at least two months. And we have been working for those cases for the last month. At least five of them has been kidnapped by the militia, and we are trying to free them. We freed, I think, three so far, because we are working with CAGE to track the case, to communicate with our lawyers in the United States, with the ICRC, and they can communicate with the militia in Yemen.

So, basically, you know, we live Guantánamo 2.0 — no legal status, some of us cannot travel, you know, live in the stigma of Guantánamo, viewed by the hosting countries as a terrorist, as killers. And we also —

JUAN GONZÁLEZ: Moazzam, I wanted to ask you — we have only about two minutes left. But one of the things that many Americans say, “Well, they weren’t convicted, but they were really terrorists.” How many of the more than 700 men who were released, to your knowledge, ended up going into some kind of organizations of terrorism or to seek to attack the United States again, from what you can tell?

MANSOOR ADAYFI: Oh, sorry. You know, basically, if you go to the report of Seton Hall University and ACLU, that 86% of the prisoners at Guantánamo [inaudible] interrogation, they — even George W. Bush himself released like around over 500 prisoners. They found out it was a mistake. Donald Rumsfeld himself, he said most of the detainees at Guantánamo, they are farmers. I’m talking about the statements by the officials in American institutes.

So, when you say — when they say, like, a terrorist, we starve at Guantánamo for just asking why we were there. So, I was told I was at terrorist at Guantánamo because my behavior within the detention. I wasn’t uncooperative. I wasn’t behave — you know, because we used to protest for stopping the torture, the hunger strike. That, they had us classified as terrorists. And specifically I’m talking about my case, but —

AMY GOODMAN: We have 10 seconds, Mansoor.

MANSOOR ADAYFI: In my case, for example, I was sold as an al-Qaeda commander. By 2015, they said “unclear if he actually joined al-Qaeda.” So, basically, there is no basis whatsoever. It’s just, you know, they try to market their narrative about Guantánamo.

AMY GOODMAN: Mansoor, we have to leave it there, but I want to encourage people to watch the hour with Mansoor Adayfi, who was imprisoned without charge for 14 years. And thank you so much to James Yee. I’m Amy Goodman, with Juan González. Wear a mask. Stay safe.