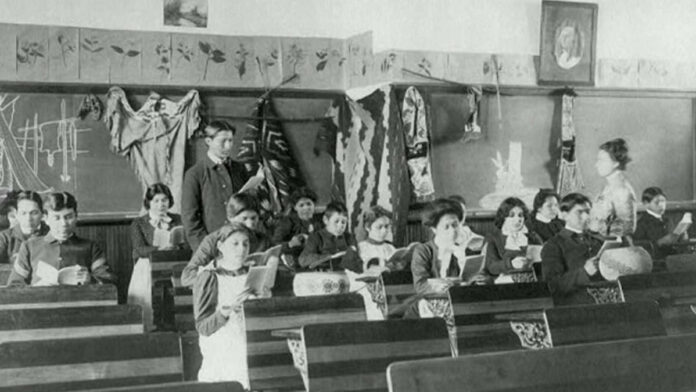 The remains of nine Indigenous children were buried by the Rosebud Sioux in South Dakota after being transferred back from the former Carlisle Indian School in Pennsylvania, where the children were forcibly sent over 140 years ago. Carlisle was the first government boarding school off reservation land, and it set the standard for other schools with its motto, “Kill the Indian, Save the Man.” The schools were known for their brutal assimilation practices that forced students to change their clothing, language and culture. The Rosebud Sioux Tribe negotiated the return of the children’s remains buried at the school, and a caravan of Rosebud Sioux youth returned them to their tribe this week. Dozens of other Native American and Alaskan Native families have asked Carlisle to return their relatives’ bodies. Knowledge of the boarding schools is still being recovered as many survivors are reluctant to revisit the trauma, says Christopher Eagle Bear, a member of the Sicangu Youth Council. “These schools, they played a key part in trying to sever that connection to who we are as Lakota,” he says. “They took away our language, and they made it impossible for us to be who we really are.”

AMY GOODMAN: In 1879, the first Indigenous children, sons and daughters of Rosebud Sioux chiefs, arrived at the Carlisle Indian Industrial School they were forced to attend in Pennsylvania. This weekend, some of them returned home, after they were ripped from their families more than a century ago.

Carlisle was the first government boarding school run that was off of reservation land, and it set the standard for other schools, with its motto, “Kill the Indian, Save the Man.” The schools were known for their brutal assimilation practices, forcing students to change their clothing, language and culture. More than 10,000 children were taken to the Carlisle school before it closed in 1918.

Many of the kids died and were buried in a cemetery on site instead of being returned to their parents. In the past week, 10 of them, their remains were returned home. One was returned to the Alaskan Aleut Tribe. The other nine were returned to representatives of the Rosebud Sioux Tribe of South Dakota. Five of them were among the first students brought to Carlisle.

On Wednesday, Interior Department Secretary Debra Haaland, who is a member of the Laguna Pueblo and whose great-grandfather was sent to Carlisle, spoke at a ceremony at the Carlisle barracks. She recently announced the creation of the Federal Indian Boarding School Truth Initiative to investigate policies that forced children to assimilate. After Wednesday’s ceremony, a caravan of Rosebud Sioux youth left the barracks with the children’s remains and traveled to South Dakota. The caravan made several stops, including a prayer service stop in Sioux City, Iowa.

ROSEBUD SIOUX YOUTH: [singing] Remember me. When the sun comes up in the morning sky, there I will be, soaring with the eagles so high, feeling free.

AMY GOODMAN: Most of the nine children were reburied Saturday morning on the Rosebud Sioux Reservation in South Dakota.

For more, we’re joined by one of the Rosebud Sioux Youth Council who played a key role in all of this: Christopher Eagle Bear, a member of the Sicangu Youth Council, joining us from Sicangu Oyate Nation in South Dakota.

We welcome you to Democracy Now!, Christopher. Thanks so much for being with us. Can you take us on the journey that you have gone on — this wasn’t the first time you went to Carlisle — to bring the remains of your family and the ancestors of others at Rosebud Sioux Reservation?

CHRISTOPHER EAGLE BEAR: Hi. Good morning. Thank you for having me.

Yes, so, when we first started, we were a youth council that was primarily just kids, you know? This is six years ago. A lot of us were still in high school or still in middle school. And so, when we started, we went over there. And for us, it was the first time — for a lot of us, actually, it was the first time we were getting a good understanding of what a boarding school was, because boarding schools aren’t really talked about, growing up, where I come from, you know? There’s a traumatic event — something traumatic happened that made you not want to talk about it, made you not want to recreate the pain, or whatever it was, and your parents just wanted you to be protected from all of that horrificness. And so, when we went to Carlisle, it was very — it was an eye-opener to who we are today as the Lakota people, you know? Everything that makes us who we are was kind of detached from us from these boarding schools.

And so, six years later, when we come back around, to come back again to bring back these kids, it was very, very eye-opening, in the sense of the things we had to learn so that we can move forward. And what that was was the knowledge of our spirituality, our way of life. And these schools, they played a key part in trying to sever that connection to who we are as Lakota. You know, they took away our language, and they made it impossible for us to be who we really are. And so, when the kids that did make it home, they came back with that traumatic experience, and they didn’t want to continue it forward for the next generations to come.

And so, I guess I want to say that, as we moved forward, it was very — it all started with a single question that one of the members, a part of the youth group, said, and that was just a simple “Why don’t we bring them home?” Then, that one question set off a big movement that, six years later, we were able to — not only our tribe, but all the other tribes involved — that we were able to bring a child home, brought them home. And ours was just the first of, you know, what I hope to come, big things some day, you know?

AMY GOODMAN: So, you were there on Wednesday at the ceremony at Carlisle when the remains of the children were handed over. Interior Secretary Deb Haaland spoke there, and then this weekend she appeared on PBS NewsHour, after attending that repatriation ceremony.

JUDY WOODRUFF: Secretary Haaland, you also wrote recently about the challenge of loving your own country, a country that was responsible for committing these acts. How do you explain that to others, to other Native Americans who look at this and question, “How can you love a country that has done this?”

INTERIOR SECRETARY DEB HAALAND: Well, first of all, my ancestral homelands are here, and I can’t go anywhere else. This is my home, and this is where my family is. This is where my history is. We’ve been here for tens of thousands of years, and we want to make sure that we are defending this land for future generations. I believe very strongly in democracy. And if you look at tribes across the country, so many Indian tribes had long-standing historical democracies in their communities. And I am confident that our country can live up to its promise to people, to our citizens, and I want to be a part of that.

INTERIOR SECRETARY DEB HAALAND: For more than a century, the Interior Department was responsible for operating the Indian boarding schools across the United States and its territories. We are therefore uniquely positioned to assist in the effort to recover the dark history of these institutions that have haunted our families for too long. It’s our responsibility. … Today, I’m announcing and sharing with you all, first, that the department will launch the Federal Indian Boarding School Initiative. At no time in history have the records or documentation of this policy been compiled or analyzed to determine the full scope of its reaches and effects. We must uncover the truth about the loss of human life and the lasting consequences of these schools.

AMY GOODMAN: That’s Interior Secretary Deb Haaland, before that, congressmember from New Mexico, first Native cabinet member in U.S. history. Christopher Eagle Bear, take us on that journey that you went — Wednesday, the repatriation ceremony at Carlisle — and where you went from there with the remains of the children.

CHRISTOPHER EAGLE BEAR: On Wednesday, at the Carlisle industrial military school, which it is now, we were given the right to hold a ceremony, which was a transferring of the spirit ceremony. And when we first went there, we didn’t expect it to be what it was. You know, we were really just thinking it was just going to be a little thing. And so, it was a really big surprise to see Interior Secretary Haaland there, as well as all the other big officials that came along, too.

And so, when we went on, it was very — it was actually very beautiful. The morning was very calm. It was very cool. And whenever the ceremony started, all the emotions came with it. There was this thickness in the room. You know, when you walked in there, you just wanted to — well, essentially, it felt like you just wanted to express through emotion that words cannot put into — that you cannot put into words. And so, the ceremony itself, it took about two hours to commence, so that we can do it properly, in the way it’s supposed to be done by our spiritual leaders, how they told us it should be.

And so, we were really fortunate to know that Secretary Deb Haaland came, because it just shows that, you know, as Native American people, we still have an extension to one another, to where we still want to — if one’s up here, we all want to be up here. And as a Native American, we know that when one of us rises, we all rise. And so, it’s really a good feeling to know that someone in her position is listening to what we’re doing, you know, is paying attention to how we move forward with the Repatriation Act. And hopefully, as we move forward, there will be other ceremonies with other tribes that move forward with their bringing home their children.

AMY GOODMAN: And we will certainly follow them. And I want to thank you, Christopher Eagle Bear, for joining us, a member of the Sicangu Youth Council, speaking to us from South Dakota.