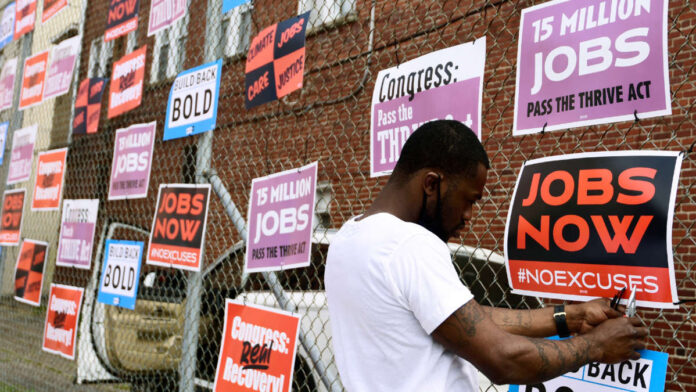 Progressives on Thursday introduced a $10 trillion climate and jobs bill that would reduce emissions, rebuild infrastructure and address environmental justice over the next decade. The bill rivals President Joe Biden’s infrastructure bill, which calls for a much smaller investment.

While Biden’s bill calls for a $2 trillion investment in infrastructure over the next decade, the Transform, Heal, and Renew by Investing in a Vibrant Economy (THRIVE) Act calls for $1 trillion per year over 10 years for investment in infrastructure, jobs and climate initiatives. The proposal is being led by Sen. Ed Markey (D-Massachusetts) and Rep. Debbie Dingell (D-Michigan) and it aims to cut climate emissions in half by 2030 and is centered around equitable change.

Highlighting the economic impacts of the coronavirus pandemic and the American Rescue Plan, Dingell said in a press call organized by the Green New Deal Network, “[As the nation is] pivoting from relief to recovery, we’re working together to advance good paying union jobs, racial equity and climate action.”

“The pandemic has shined a light on the cracks of our society. It’s placed a burden on vulnerable communities,” said Dingell. “That’s why we need a bold economic renewal plan, and the THRIVE Act is exactly what we need.”

“The climate crisis is here. It’s here. This is not some future issue.” said Rep. Jason Crow (D-Colorado), a sponsor of the bill, highlighting wildfires in his state and public health issues due to air pollution. “The most expensive thing our nation has ever done is not be ready for this pandemic. So we have to do the right thing and make investments now to be prepared to save lives” and address the climate crisis, Crow said.

One of the main focuses of the bill is job creation — a March report by the University of Massachusetts Amherst found that the THRIVE Act would create about 15.5 million jobs per year. The bill stipulates that the jobs must be high quality, with at least a $15 an hour wage and with benefits like paid family and sick leave.

“Unions and the environmentalists have come together and are working together to ensure that we rebuild our country’s economy with a focus on justice and healing,” said Dingell.

The bill would also ensure that historically oppressed groups are at the front line of the transition to a greener nation by creating a 20-member board of representatives from frontline communities, unions and Indigenous nations to help guide where investments should be made. Fifty percent of investments from the bill, it stipulates, must go toward frontline communities, which suffer the most from climate impacts.

“Policymakers cannot ignore the realities that are facing millions of Black, brown, Indigenous, immigrant and working families all across America. The four crises facing America are literally killing us. They are climate change, the public health pandemic, racial injustice and economic inequality,” said Markey in the press call. “We can’t defeat any of these crises alone. We must develop a roadmap for recovery that addresses them all.”

The bill pays particular care to Indigenous people, and requires the government to respect Indigenous nations in the investments put forth by the bill. It attempts to ensure that Native communities would be consulted and their consent sought before things like pipelines are built on Indigenous territory.

The THRIVE Agenda and corresponding THRIVE Act was originally introduced by the former Rep. Deb Haaland (D-New Mexico), who now serves as the first Indigenous Interior Secretary, and who has long been a champion of Indigenous rights and sovereignty. Polling from Data for Progress last year showed that the THRIVE Agenda pillars, including investing in green infrastructure and recognizing Native sovereignty, are popular — and the agenda has gained over 100 co-sponsors since Haaland introduced it.

The THRIVE Act also has the support of Democrats like Sen. Jeff Merkley (D-Oregon) and Representatives Ilhan Omar, (D-Minnesota), Pramila Jayapal (D-Washington) and Ro Khanna (D-California). Though it has little hope of being passed into law, elements of the bill could end up being incorporated into Biden’s infrastructure plan, just as parts of the Green New Deal have been embraced by Biden.