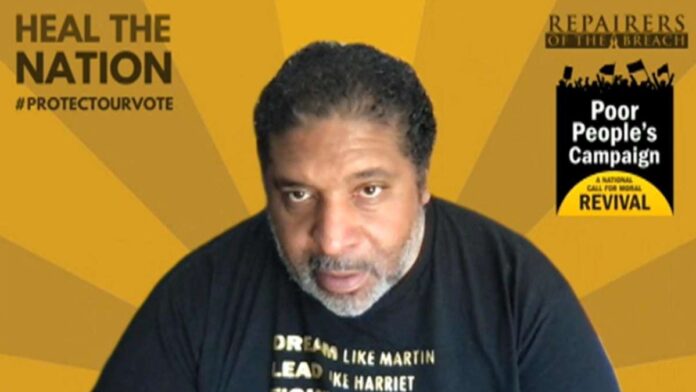 Reverend William Barber, co-chair of the Poor People’s Campaign and president of Repairers of the Breach, says the United States needs a “Third Reconstruction” aimed at lifting 140 million poor and low-income people out of poverty. Barber worked with Congressmembers Barbara Lee and Pramila Jayapal to unveil a congressional resolution for a Third Reconstruction this week, which includes measures to expand voting rights, implement immigration reform, raise the minimum wage, establish a federal jobs program and more. “There is not a scarcity of resources,” says Barber. “What there is is a scarcity of social justice conscience.”

AMY GOODMAN: Well, Reverend Barber, you travel fast. Yesterday, you were with Congressmembers Barbara Lee and Pramila Jayapal, among others, unveiling a congressional resolution for a “Third Reconstruction.” This is Congressmember Barbara Lee speaking Wednesday on the House floor.

REP. BARBARA LEE: We can realize a Third Reconstruction to fully address poverty and low wages from the bottom up, from housing to healthcare, water, education and more. We need a Third Reconstruction to revive our moral and political commitments to democracy and the founding principles of this country. That’s why Congresswoman Pramila Jayapal and I have worked with great leaders, such as Bishop William Barber and Dr. Liz Theoharis, co-chairs of the Poor People’s Campaign, in a National Call for Moral Revival.

REP. BARBARA LEE: Thank you. I urge my colleagues to co-sponsor our resolution, and I want to thank the millions of people whose voices we have heard.

AMY GOODMAN: That was Congressmember Lee speaking on the House floor Wednesday. Thursday, she was with you outside the Capitol with Pramila Jayapal and others. Talk about the Third Reconstruction and what this resolution is.

REV. WILLIAM BARBER II: Well, Amy, you know, last year you helped us when we had the Mass Poor People’s Assembly and Moral March on Washington, a virtual affair, and over 2.7 million people showed up. And we laid out an agenda that said we can no longer ignore the 140 million poor and low-wealth people in this country — this was before the pandemic — and that we had to address simultaneously systemic racism, systemic poverty, ecological devastation, denial of healthcare, the war economy, militarization of our communities, and the false moral narrative of religious nationalism and white evangelicalism, and that the cost was too high. The price of inequality, as Joseph Stiglitz had said, is too high.

Well, we have now put in a resolution to say to the nation, “We’ve heard some talk about child poverty. We’ve heard some talk about dealing with low wages. What if we — the nation needs to have a resolve.” And this resolution lays out the problem and then lays out the resolve, the kind of public policy we have to pass if we’re going to fully address poverty. We support this agenda. That’s why it’s called a “Third Reconstruction: Fully Addressing Poverty … from the Bottom Up.”

Inside of this resolution, the agenda says we must change how we measure poverty, because we’re measuring it wrong. Right now we say in this country — the government does — that if you make $12,900 a year, you’re not poor. That is ridiculous. It does not make any sense. Sixty percent of Americans can’t even afford a thousand-dollar emergency right now in America. And we know that 400 families make an average of $97,000 an hour, while we make less than — less than $15. Most people do not make a living wage. And waitresses and people in restaurants only make $2.13 an hour.

We have to have guaranteed living wages, guaranteed income, healthcare. We need an infrastructure plan, but it’s got to be big enough, and it has to be clear that it’s going to reach down to the bottom and the poorest communities first. So, it lays out this agenda of what we need to do to fully — not just a little bit, not 10%, 20% here, or even 50%, but to fully — address poverty. And this resolution says, here’s the resolve we must know: There is not a scarcity of resources. Don’t tell us that. There is not a scarcity of solutions. What there is is a scarcity of social justice conscience. And we’re saying, with our movement, that stops now.

In a few weeks, in June, we’re going to have another virtual gathering, a mass poor people and low-wage workers’ gathering. But we’re launching, Amy — I want to announce it first here on Democracy Now! We’re launching a 365-day mobilizing and organizing effort to a Mass Poor People, Low-Wage Assembly and Moral March on Washington, June 20, 2022, right in the middle of the mid-year elections, because poor people now make up 30% of the electorate — 65 million people. And we cannot tiptoe around these issues. The Economic Policy Institute has said we lose a trillion dollars a year from child poverty alone. And it’s not just one little piece of policy that we have to —

AMY GOODMAN: We have 10 seconds.

REV. WILLIAM BARBER II: We need full reconstruction of the society to deal with economic injustice, and it must happen now.

AMY GOODMAN: Reverend Dr. William Barber, we thank you for being with us, co-chair of the Poor People’s Campaign, president of Repairers of the Breach, speaking to us from Elizabeth City, North Carolina, where demands will be made in the case of the police killing of Andrew Brown.