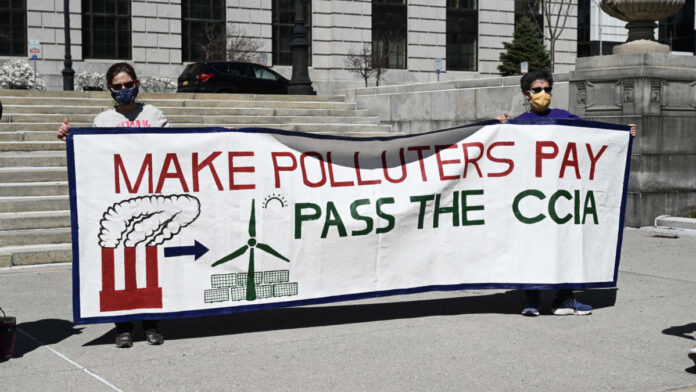 As Republicans in Washington propose to further strip an already pared-down jobs and infrastructure package that activists warn is not bold enough to deliver Biden’s promises of “real change,” lawmakers with ties to oil and gas interests are obstructing action at the state level by misrepresenting regional climate bills as gas taxes.

In April, GOP lawmakers in Connecticut launched a “Stop the Gas and Food Tax” campaign, which characterizes an effort by 13 Northeast and Mid-Atlantic states to reduce greenhouse gas emissions as a plan to “punish” the middle class. The effort their ire was directed at, the Transportation and Climate Initiative Program (TCI-P), contains provisions to cap and reduce greenhouse gas emissions from the transportation sector.

“I think one sign of the desperation of the [GOP] opposition is that they’re really resorting now to things that are factually untrue,” Charles Rothenberger, climate and energy attorney at Save the Sound, told Connecticut Mirror, referring to how the TCI-P categorically does not levy a tax on consumers at the pump.

Progressive groups including the Climate Justice Alliance have also opposed the program, but on the grounds that it distracts from reforms that center the needs of communities on the frontlines of pollution and climate crises, such as overhauling the mass transit system.

Right-wing groups have relied on disinformation and economic alarmism to promote the fossil fuel industry’s agenda for decades, advocates say. For example, in 2015, a multimillion-dollar PR campaign by a front group for the Western States Petroleum Association (WSPA) surfaced in California when lawmakers were getting close to passing the state’s Clean Energy and Pollution Act. The Union of Concerned Scientists’ Adrienne Alvord described the WSPA radio spots and glossy mailers calling on Californians to “stop the hidden gas tax” as “one of the most extreme examples of fossil fuel-interest misinformation I’ve ever seen.”

Now, efforts have arisen in New York state to quash what would be the most progressive state-level climate jobs bill in the U.S. The Climate and Community Investment Act (CCIA) is a novel proposal that provides a roadmap for funding the state’s 2019 commitment to 100 percent zero-emission electricity by 2040, by establishing a new state authority that proponents estimate would generate between $11 billion and $15 billion annually by calling on polluters to pay a $55 fee on each ton of climate pollution emitted, which would rise to $74 by 2030. The bill also calls for additional fees on co-pollutants that are harmful to human health, like ozone and the microscopic particulate pollution known as PM2.5, which is highly correlated with asthma and other respiratory problems.

Unlike TCI-P or cap-and-trade schemes, the CCIA is designed by and for the almost 300 community organizations that worked with state lawmakers to introduce it, under a multiracial, multi-sector coalition called NY Renews. According to a report by the coalition, the legislation would support more than 160,000 ongoing jobs, including 4,560 jobs manufacturing electric buses, 11,700 jobs retrofitting buildings to increase energy efficiency and 11,404 jobs in the care economy. The fund would also provide tax rebates to low- and middle-income New Yorkers to cover fluctuating energy costs amid the transition away from fossil fuels.

Lawmakers with ties to oil and gas interests are obstructing action at the state level by misrepresenting regional climate bills as gas taxes.

Organizers began facing a barrage of pushback beginning in April, after vice president of the corporate lobbying group Business Council of New York State Ken Pokalsky testified against the bill, estimating a 55 cent per gallon fee on gasoline and a 26 percent rise in the cost of natural gas for home heating. According to watchdog group the Public Accountability Initiative and database LittleSis, the Business Council is heavily backed by fossil fuel interests, with members including pipeline conglomerate Kinder Morgan, Exxon subsidiary XTO Energy and the American Petroleum Institute.

Vocal opposition from Republican lawmakers followed days later, including from New York state senators Daphne Jordan and Thomas F. O’Mara, whose top campaign contributors during the 2020 election cycle included the Business Council. Local papers across the state, such as The Island Now and the Saratogian amplified the framing of the bill as a “gas tax” by linking concern over rising prices at the pump to a recent cyberattack on the Colonial Pipeline. A similar message has continued to be broadcast on TV stations and an NPR affiliate station.

Stephan Edel, coalition coordinator with NY Renews, told Truthout the gas tax rhetoric is disingenuous and distracts from what the bill actually offers communities across the state. “We put the fee upstream on importers and major fossil fuel companies. Some of those companies will choose to pass those costs onto consumers even though they don’t have to,” he explained.

NY Renews has conducted multiple analyses of the legislation’s impact on New Yorkers, which have all concluded that tax rebates of $700-$1,200 per household to help with energy costs would cover or exceed the potential impact of rising fuel costs passed to consumers, leaving 60 percent of New Yorkers with more money. “Those things are completely lost when the conversation focuses on ‘will the price at the pump go up?’” Edel added.

The Climate and Community Investment Act … is designed by and for the almost 300 community organizations … under a multiracial, multi-sector coalition called NY Renews.

The bill’s potential passage comes at a critical time given the federal gridlock. Tamara Toles O’Laughlin, a national climate strategist, told Truthout the CCIA and efforts to stamp it out could set a precedent for what will play out elsewhere. “New York is always a trendsetter and as a state laboratory is often a good place to learn about the nuance from financing to accountability in the State Attorney General, the regulatory space and in the streets,” she said.

Sacoby Wilson, a professor of environmental health at the University of Maryland, says the CCIA would serve as a model for other regions in the U.S. that have yet to develop such a dense environmental justice network and presence in the halls of power. “That bill has the opportunity to bring justice forward and really target communities with the most needs,” he said, noting that without legislation like the CCIA, aggressive action on climate issues at the state and federal levels could result in just another “massive transfer of wealth” that further harms low-income and communities of color, which Wilson says “have been dumped on for years and excluded from economic opportunity.”

The executive director of the Brooklyn-based community development organization UPROSE, Elizabeth Yeampierre, took part in preventing just this kind of wealth transfer in 2019, when her organization helped fight off an attempt by real estate developers to rezone an industrial waterfront area in Brooklyn for high-rise apartments and hotels. The proposed development was slated for the Sunset Park neighborhood, where 29 percent of residents, the majority of whom are Latinx or Asian, live below the poverty level. Now, instead of hosting luxury apartments that organizers say would have gentrified the neighborhood, Sunset Park is slated to serve as a manufacturing hub for offshore wind turbines, where the Norwegian company Equinor has committed $50 million to workforce development. As Inside Climate News reports, residents have expressed excitement about the possibility of over 1,000 high-paying jobs as an alternative to retail or service gigs or working in dirtier industries. “New York is really the belly of the beast when it comes to capitalism,” Yeampierre told Truthout, noting how the CCIA is designed to help organizers tap into funding for clean energy and climate resilience projects that build neighborhood wealth, like what’s now happening in Sunset Park.

The climate bill faces some opposition on Long Island and upstate, yet almost two-thirds of New Yorkers acknowledge that climate change is already hurting people in the U.S., and 75 percent of residents think corporations should do more to address global warming. Yeampierre said she believes necessary constituents and lawmakers might back the bill — if they weren’t facing the oil and gas industry’s alternative facts. “I would think that people would be excited to hear about communities leading with solutions that are viable, operational and that address the disparities of fossil fuel extraction and racism,” she said. “If you address the needs of the most vulnerable, everyone will benefit.”

The proposed legislation currently has 28 co-sponsors in the Senate and 49 co-sponsors in the State Assembly. In the remaining days of the legislative session, which ends on June 10, Clarke Gocker, an organizer with PUSH Buffalo, said activists will continue reaching deeper into communities to educate policy makers, residents and small businesses on what’s actually in the bill. For example, the bill includes billions annually in funding for projects like Buffalo’s School 77: a formerly abandoned building on the city’s west side that is now home to affordable apartments, a Black theater collective, a community gym, and a space that served as a COVID-19 mutual aid hub last summer, all powered by a 65-kilowatt solar array installed and maintained by local workers.