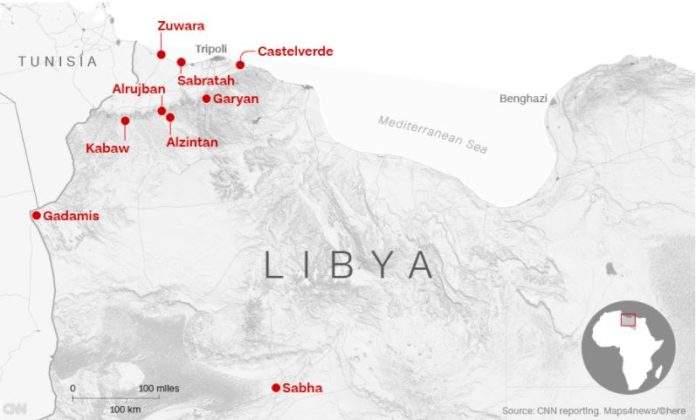 In November 2017,  a slave auction was broadcast around the world.

CNN journalists travelled to a town not far from Tripoli, Libya and captured shocking video footage of the sale of 12 Nigerian men.

This was not an isolated occurrence.

Many African people seeking to migrate via Libya to Europe through irregular channels – either to improve their economic prospects or to seek asylum – are falling victim to unthinkable extremes of abuse, including modern slavery.

Increasingly restrictive approaches, applied by the European Union in an effort to curb the flow of migrants from Libya by returning migrants back to detention centres in that country, have exacerbated the issue.

Far from being a source of order or security, these detention centres have proved to be little more than staging pens for human merchandise subjected to rape, overcrowding, organised extortion, and sale into slavery.

While the EU agreed to fund an emergency program of voluntary repatriations from Libya’s detention centres in November 2017,1 by February 2018 there were still at least 700,000 migrants in Libya, some 4,400 of whom were in immigration detention.2

Furthermore, while the European action has provided a much-needed emergency response, this has not addressed the underlying cause of the crisis – failing policies on migration and refugees.

Since we published the last Global Slavery Index in 2016, there have been many successes in terms of increased efforts to address modern slavery.

The 2018 Global Slavery Index confirms that governments are taking more of the steps we ask of them to respond to modern slavery – strengthening laws, training police, providing services and shelters to victims, and engaging with business on supply chain transparency.

Businesses and governments are increasingly accepting the reality that when modern slavery occurs in one country, the direct results will be felt throughout international supply chains.

We are seeing a stronger focus on collaboration and measurement as key foundations of truly coordinated, informed, and impactful responses to modern slavery. The UN Security Council has made two resolutions on human trafficking, one in 2018 imposing sanctions for individuals involved in the Libyan slave-trade.

While this is all progress, the haunting CNN footage of a slave-auction conducted in 2017 must act as a sharp reminder that these successes take place against a backdrop of increasingly extreme and blatant patterns of modern slavery.

Our small steps forward must also be measured against the reality that we remain, as an international community, unable to respond quickly and effectively to prevent the atrocities that we know will create a breeding ground for further abuses, including slavery.

For example, in 2015, the world was horrified when mass graves of tortured and murdered Rohingya migrants were discovered in “death camps” along the Thai–Malaysian border, to which they had been smuggled.3

These camps were used as staging pens for Rohingya migrants desperate to leave Myanmar, only to find themselves subject to extortion, torture, and human trafficking by the criminals who had been paid to “help”.

Yet since conclusive evidence began to emerge in August 2017 of fresh campaigns of ethnic cleansing of the Rohingya, the international community has done little to act. As nearly 700,000 people escaped burned villages and fled to the shelter of temporary camps in Bangladesh, UN agencies warned of the risk of modern slavery in this chaotic and high-risk environment.4 Disagreement in the UN Security Council Permanent Membership meant that a binding resolution was scaled back to a Presidential Statement in December 2017.5 In the absence of any coordinated international response, some 800,000 people remain living in camps and shelters built on the mud of Cox Bazar, Bangladesh.

Important questions in our pursuit to end modern slavery remain. How is it that with all we have in place to respond to modern slavery in 2018, human beings are still being sold in Libya as “big strong boys for farm work?” Why is it still so pervasive around the world? Why and how is it tolerated in the globalising economy? What are we missing?

The answers are found partly in the ever-present challenges and failures of implementation.

Laws on paper are worthless without implementation and enforcement. Police training means little if witnesses can be intimidated and judges can be bought. Or shelters operating like prisons continue to leave victims of modern slavery with few, if any, alternatives.

This underscores the enormous value of transparency and reporting – a commendable feature seen in the publication of recent audits of police responses in the UK.6 If all governments were genuinely open to transparently examining the effectiveness of their efforts, we would not have tens of millions of people in modern slavery.

The answers also lie in deeper examination of drivers of vulnerability to this crime, not only in matters related to poverty, access and governance found in low-income countries, but also in the gaping holes in protection that developed countries create when they enact sweeping immigration, crime control, or social welfare policies that undermine their other efforts to stop modern slavery.

We have to shift from individual to collective approaches to solving what are truly global problems.

It is unthinkable that in 2018, world leaders have managed to make global, legally binding agreements on everything from outer space to carriage of goods by sea, but they have yet to agree on a framework that would enable the safe movement of people globally. The withdrawal of the United States from international discussions about the UN Global Compacts on Refugees and Migration is a massive failure of leadership.

Finding solutions to modern slavery must also be integrally connected to efforts to prevent and end protracted conflict situations.

It is not enough to simply blame conflict on those who hold the weapons. We must also apply responsibility to those who have the power to influence situations but choose not to act. As the outgoing UN High Commissioner for Human Rights said,

while conflict is perpetrated by criminals the responsibility for the continuation of so much pain lies with the five permanent members of the UN Security Council.  So long as the veto is used by them to block any unity of action, when it is needed the most, when it could reduce the extreme suffering of innocent people, then it is they – the permanent members – who must answer before the victims.7

In this regard, France and the UK are to be commended for their leadership proposing the five permanent members of the UN Security Council voluntarily suspend the use of their veto rights in situations involving mass atrocities.

People's Bank of China outlines draft rules to curb monopolistic practices in online payments, saying firms with >50% of the market could face anti-trust...

Sources: Facebook has no plans to lift Trump's indefinite suspension following his departure from the White House (Dylan Byers/NBC News)

Interview with Ajit Pai, who outlasted many senior officials in the Trump administration, on 5G, internet access, and FCC's independence over his tenure (Drew...

A look at obscure defense startup Rebellion Defense, which works to create AI and infosec applications for the US government and is backed by...

What Happens if You Get Caught With Cannabis in a National Park?