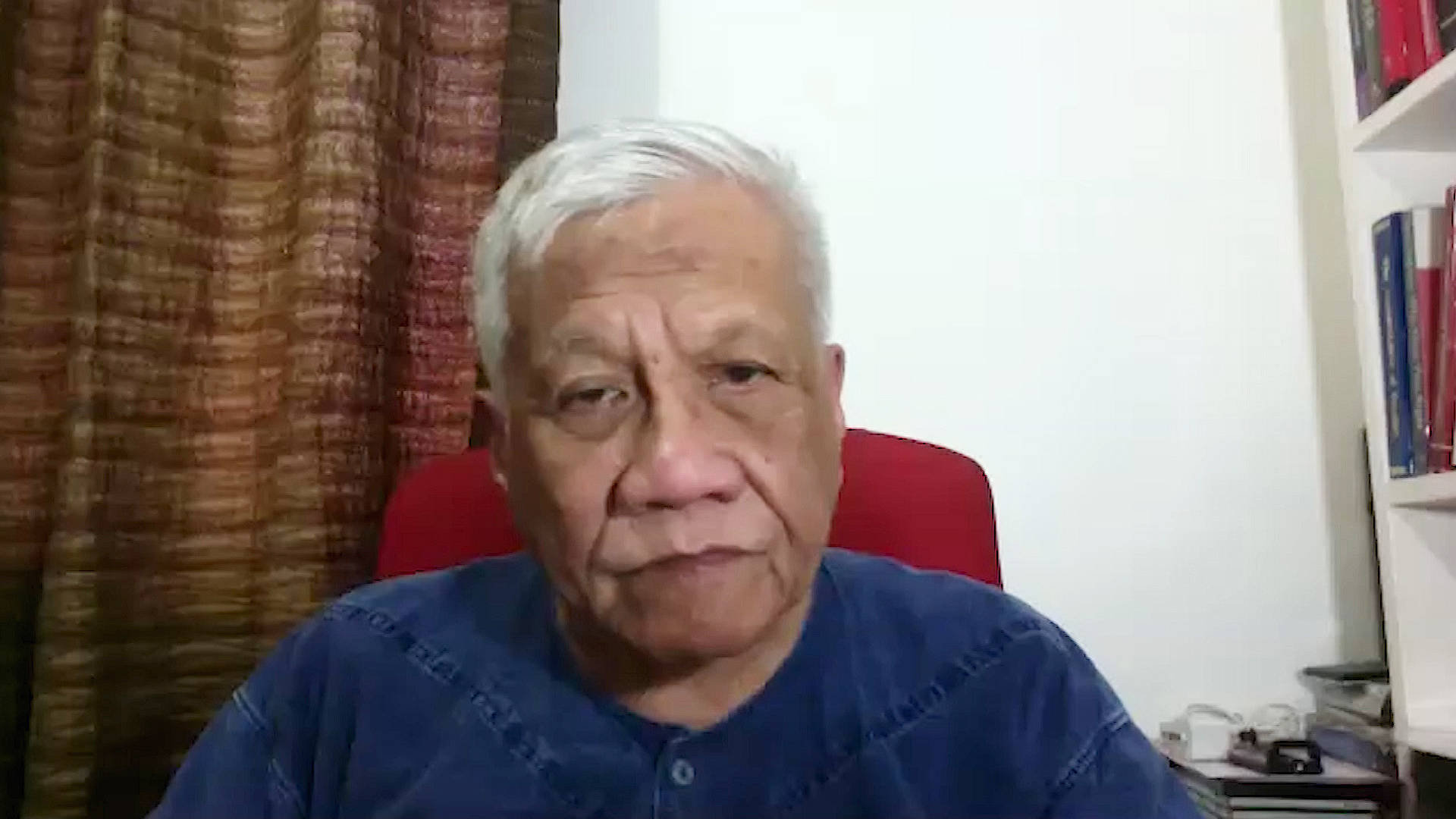 AMY GOODMAN: And, Walden Bello, I wanted to ask you about China and U.S.-China relations in light of all of this. On Tuesday, foreign ministers from G7 nations met in London. They’re continuing to meet. China topped the agenda. This comes as both China and the United States are accusing each other of escalating tensions in the South China Sea. Last week, the Chinese government claimed there’s been a 40% increase of activity by U.S. planes in Chinese-claimed areas since Biden took office. Activity of U.S. military ships is up 20%. On Sunday, Secretary of State Tony Blinken appeared on 60 Minutes and accused China of acting in increasingly adversarial ways.

SECRETARY OF STATE ANTONY BLINKEN: It is the one country in the world that has the military, economic, diplomatic capacity to undermine or challenge the rules-based order that we care so much about and are determined to defend. But I want to be very clear about something, and this is important. Our purpose is not to contain China, to hold it back, to keep it down. It is to uphold this rules-based order that China is posing a challenge to. Anyone who poses a challenge to that order, we’re going to stand up and defend it.

AMY GOODMAN: That’s the secretary of state, Tony Blinken. And, Walden Bello, I was wondering if you can weave this in. We’ve been having this discussion about vaccines and the U.S. really being seen, in the eyes of the world, right now as more of a danger to the world, especially when compared to Russia and China, Russia and China getting out their own vaccines and facilitating others, the U.S. not doing the same at this point. If you can link that to this also increased tension between China and the United States?

WALDEN BELLO: Yes. You know, first of all, I think that when people look at what the Trump administration did with respect to blocking the TRIPS waiver and then contrast that to the way that China was shipping Chinese vaccines — OK, Sinovac, Sinopharm — to countries in the Global South, OK, there was a very big contrast there. In fact, these shipments were donations being given. Now, in the case of the Philippines, for instance, the Sinovac is the only vaccines, until about two days ago, that were available for the general population. Yes, we had the AstraZeneca vaccine from Europe that had come in, and seniors were vaccinated with it, but the vast majority has been Sinovac that has come in. So, I think, in terms of the impact on the Global South, there’s been that contrast.

Now, when it comes to the Philippines, this sort of donations of the Chinese vaccine has, however, been seen suspiciously by a large part of the population as basically China’s effort to buy off the government in terms of the sovereignty rights in the South China Sea, or what we call here the West Philippine Sea, because the Duterte administration has in fact hardly protested against the moves of China in the West Philippine Sea, or the South China Sea, around taking over and infringing on maritime formations that lie within the exclusive economic zone of the Philippines. And so, yeah, we have the situation within the South China Sea whereby a number of the countries here, including the Philippines and Vietnam, feel that they have been really disadvantaged by China’s claiming that the whole South China Sea, or West Philippine Sea, belongs to it alone, 90% of that, whereas all these other five other countries border on it. Now, that’s a basic injustice, let me put it that way. That’s really territorial aggrandizement that’s taking place. However, OK — and China mustn’t be doing that.

However, you really need to look at it within this broader regional context, where China is surrounded by something like in the order of 55 to 60 U.S. military bases coming down, from Japan to South Korea to Guam to the Philippines, where they have five bases over here. You’ve got to look at it in the context of the South China Sea, in fact. You know, basically, the 7th Fleet of the United States has deployed itself and considers that basically a free zone for its ships. And so, what we’re seeing is that China’s perspective or posture has been that of strategic defense. And even the Pentagon admits that China’s strategic posture is that of strategic defense, whereas that of the United States is more of an offensive, rapid forward deployment.

And basically what I want to say is this, OK? China’s moves in the South China Sea, or the West Philippine Sea, are not justified. They’re illegal. But at the same time, they are made in terms of a strategic response to U.S. encirclement and heightened U.S. military activity. OK? And Blinken — that’s why we need to look at this, you know, Blinken’s statement. You know, it’s a warmongering statement. I mean, they came like gangbusters in the Anchorage meeting about two months ago, where Blinken basically —

AMY GOODMAN: We have 10 seconds, Walden.

WALDEN BELLO: Yes — acted so arrogantly towards the Chinese. You know, so I guess my point is this. Trump’s anti-China policy is now also being followed by the administrations of — the Biden administration’s intensified [inaudible] —

AMY GOODMAN: We’re going to have to leave it there, but we will continue to explore this issue. Thank you so much to Walden Bello, acclaimed Filipino scholar. I’m Amy Goodman.