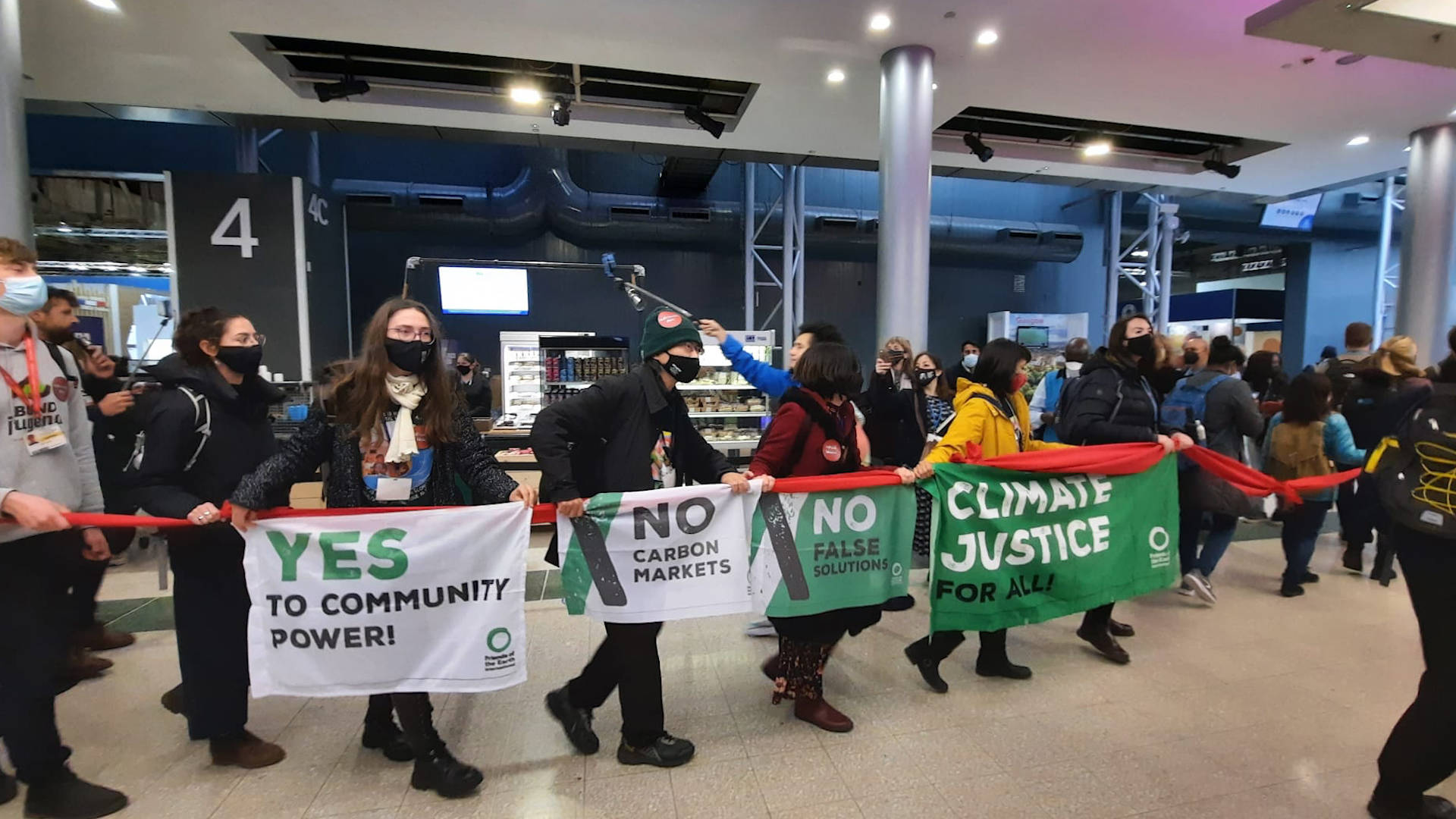 AMY GOODMAN: This is Democracy Now! It’s Climate Countdown. I’m Amy Goodman, as we continue our coverage of the U.N. climate summit in Glasgow, Scotland, where negotiators have backed away from including a call to phase out coal as well as fossil fuel subsidies in the latest draft agreement, which was released today, the final scheduled day of the two-week summit. An earlier draft had called for, quote, “phasing-out of coal and subsidies for fossil fuels.” Meanwhile, the new draft is calling for the phaseout of “unabated coal power and of inefficient subsidies for fossil fuels.” One of the added words, “unabated,” means nations could continue using coal if they’re able to catch large amounts of the carbon dioxide they emit — something that’s been widely deemed controversial as the technology to fully capture greenhouse gases is still being developed. Indigenous leaders and climate justice activists have denounced the draft agreement as a failure and far weaker than what climate scientists say is crucial to do to contain global heating to 1.5 degrees Celsius, or 2.7 degrees Fahrenheit, above preindustrial levels.

Today, dozens of people took over the plenary hall inside COP26 to amplify their demands. A huge procession of global climate justice advocates then marched through the hallways of COP26 as they chanted “Power to the people!” and walked out of the venue, where they met with other protesters.

For more, we go outside the venue, where we’re joined by Asad Rehman, executive director of War on Want, lead spokesperson for the COP26 Coalition, one of the organizers of today’s People’s Plenary, part of the walkout now.

Asad Rehman, welcome back to Democracy Now! Describe where you are and what your response is to this latest draft of what will be the Glasgow pact.

ASAD REHMAN: Well, our response to this, we should not call it a Glasgow pact, we should be call it the Glasgow suicide pact for the poorest in the world, because it does not keep us below the 1.5 degree guard rail. In fact, it heads us closer to 3 degrees, where governments turn their backs on the poorest and the most vulnerable in the world, unable to even meet the paltry $100 billion. They’re ramming through so many loopholes that it makes a mockery of these climate negotiations.

And that’s why this morning over 700 people from all the different civil society constituencies, representing environmental organizations, women and gender, youth, trade unions, Indigenous people, farmers and peasants, came together and took over one of the main plenary halls where these deals are cooked up. And we issued our own People’s Declaration, calling on what we actually want to see outside this COP: countries to commit to their fair share of effort, strong binding targets with real zero by 2030, meeting the $100 billion, but actually recognizing that we need trillions if we’re going to have a real, just transition that leaves no one behind, recognizing that the reality of this climate crisis means that we need adaptation and loss and damage for the poorest and most vulnerable, and that rich countries need to take responsibility and liability for the damage that they’re doing. We know that it is the polluters and big businesses who helped draft some of these clauses, so this was our attempt, as people, drafting our declaration as a rallying call both from the inside and the outside.

AMY GOODMAN: So, describe the People’s Plenary and the walkout, Asad.

ASAD REHMAN: So, this morning — there are official U.N. constituencies which are recognized by the United Nations, and we’re an integral part of these negotiations. We should be — we are the eyes and ears of global civil society. And what we’ve found over these two weeks is that we’ve been locked out of those negotiations. We’ve been barred from the negotiating rooms. We’re unable to even begin to see what is being negotiated so-called in our name.

And that drove, in an unprecedented moment of unity across, really, all of global — and these are not just climate justice organizations — mainstream organizations all coming together and saying, “We’re absolutely fed up. We’re absolutely frustrated by the slow pace of action, by the inaction and by the way that the U.K. presidency has hosted this COP to silence our voices.” And they issued a — we heard a speech after speech from each of the constituencies. And then a declaration, which had been drafted by all the different constituencies, was adopted by popular acclaim.

People broke out into singing of “Power to the People.” And led by the Indigenous movement, we came out to meet a massive rally of people who, from the outside, were at the gates to welcome both the inside and outside together and to declare that whilst they are calling for inaction, we’re calling for justice. And our movement is getting stronger and stronger. We’re uniting trade unions and Indigenous, women and students, young and old. And we’re building the movement that is needed. We know that this change will only happen when we, as ordinary people, lead this change and force our governments to act in our interests.

AMY GOODMAN: Asad, we only have a few minutes, and I wanted to ask about your meeting with Boris Johnson, the British prime minister.

ASAD REHMAN: Well, yes, I met with Boris Johnson. We [inaudible]. We gave a commitment to the movements, to the people of the U.K., saying that not only would we build the movement that is needed here in the U.K. — and we have built a powerful climate justice movement that put hundreds of thousands of people on the streets — but we take that voice and that message and their demands into the negotiations and into making sure that the prime minister heard that. I set out that the U.K. is hypocritical, that it cannot be a climate leader when it’s greenlighting more gas and oil licenses in the North Sea, when it’s turned its back on the poorest with the COVID vaccine apartheid, when it’s cut its overseas development aid but it’s handing out billions and billions to fossil fuel subsidies. If the U.K. was a genuine leader here, it would be committing to its fair share of action.

The prime minister, of course, said, “I’d love to see more action,” as if somebody else is doing — is responsible and is able to do this action. He’s the leader of this country. Britain is one of the most polluting countries historically and has a responsibility to act. And, in fact, when we started this summit, the prime minister said, “We’re at one minute to midnight.” He doesn’t act like we’re at one minute to midnight. He acts like we’ve got years and years and years. And the reason why is because, of course, the first people on the frontlines are not the people in the Global North, they’re the people of the Global South. Once again, sacrificing people for profit.

ASAD REHMAN: Well, a radical Global Green New Deal not only tackles the climate crisis and cuts our emissions fairly, but it actually also recognizes we need to tackle globally inequality and poverty. Half the world is locked into poverty at this moment, in a world of abundant riches. We need to [inaudible] within planetary limits. We cannot build a transition in the Global North with the same logic of extraction on the Global South. We need to meet. We need to transform from an economy of extraction to a circular world sharing equitably the world’s resources and wealth.

We also need to recognize that the realities of why these injustices are taking place are structural, and they’ve been hardwired into our economies. From slavery to colonialism to imperialism to neoliberalism, what we’ve seen is that the richest have grown wealthy on the backs of overwhelmingly the Global South. We need to uproot those systems and create a fair and just world, one where everybody has a right to live with dignity and we live in harmony with our planet.

We know what needs to be done. We’ve got the plans and policies. We know we need to transform our energy and food system. We need to guarantee people living wages, public services and social protection. We know all the things that we need. And now need to build the power for it. And all around the world over these last two weeks, what’s been amazing has been the different iterations of people not just saying what’s wrong, but saying this is the world, and this is what we’re going to fight, and this is what we’re going to create. And that’s been the most uplifting thing about this summit.

AMY GOODMAN: Asad Rehman, I want to thank you for being with us, executive director of the War on Want, lead spokesperson for the COP26 Coalition. He addressed the plenary earlier this week. Today he was one of the leaders of the walkout of civil society.

Next up, we go to Massacre: The Story of East Timor. Thirty years ago today, Indonesian soldiers opened fire on unarmed East Timorese civilians, killing more than 270 people. Stay with us.

From pollution to dams: here’s what is plaguing America’s 10 most endangered rivers