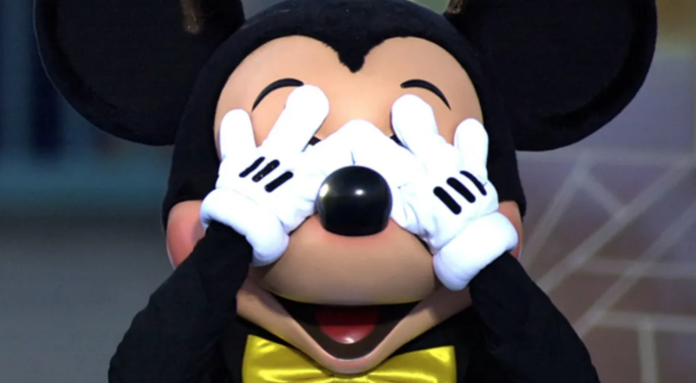 In 1930, Ohio banned a cartoon called The Shindig because Clarabelle Cow was shown reading Three Weeks by Elinor Glyn, the premier romance novelist of the time. Check it out (at the 1:05 mark above) and let us know if you’re scandalized.

With movies on 10-foot screen being a relatively new thing in Romania in 1935, the government decided to ban Mickey Mouse, concerned that children would be terrified of a monstrous rodent.

In 1929, a German censor banned a Mickey Mouse short called “The Barnyard Battle.” The reason? An army of cats wearing pickelhauben, the pointed helmets worn by German military in the 19th and 20th centuries: “The wearing of German military helmets by an army of cats which oppose a militia of mice is offensive to national dignity. Permission to exhibit this production in Germany is refused.”

The German dislike for Mickey Mouse continued into the mid-1930s, with one German newspaper wondering why such a small and dirty animal would be idolized by children across the world: “Mickey Mouse is the most miserable ideal ever revealed … Healthy emotions tell every independent young man and every honorable youth that the dirty and filth-covered vermin, the greatest bacteria carrier in the animal kingdom, cannot be the ideal type of animal.” Mickey was originally banned from Nazi Germany, but eventually the mouse’s popularity won out.

In 2014, Iran’s Organization for Supporting Manufacturers and Consumers announced a ban on school supplies and stationery products featuring “demoralizing images,” including that of Disney characters such as Mickey Mouse, Winnie the Pooh, Sleeping Beauty, and characters from Toy Story.

7. DISNEY VS. THE BOY KING OF YUGOSLAVIA

In 1937, a Mickey Mouse adventure was so similar to real events in Yugoslavia that thecomic strip was banned. State police say the comic strip depicted a “Puritan-like revolt” that was a danger to the “Boy King,” Peter II of Yugoslavia, who was just 14 at the time. A journalist who wrote about the ban was consequently escorted out of the country.

Though Mussolini banned many cartoons and American influences from Italy in 1938, Mickey Mouse flew under the radar. It’s been said that Mussolini’s children were such Mickey Mouse fans that they were able to convince him to keep the rodent around.

9. NOT GOING FOR “I’M GOING TO DISNEYLAND”

Mickey and his friends were banned from the 1988 Seoul Olympics in a roundabout way. As they do with many major sporting events, including the Super Bowl, Disney had contacted American favorites to win in each event to ask them to say the famous “I’m going to Disneyland!” line if they won. When American swimmer Matt Biondi won the 100-meter freestyle, he dutifully complied with the request. After a complaint from the East Germans, the tape was pulled and given to the International Olympic Committee.

In 1993, Mickey was banned from a place he shouldn’t have been in the first place: Seattle liquor stores. As a wonderful opening sentence from the Associated Press explained, “Mickey Mouse, the Easter Bunny and teddy bears have no business selling booze, the Washington State Liquor Control Board has decided.” A handful of stores had painted Mickey and other characters as part of a promotion. A Disney VP said Mickey was “a nondrinker.”

Let’s end with another strike against The Shindig (see #1) and Clarabelle’s bulging udder. Less than a year after The Shindig ban, the Motion Picture Producers and Directors of America announced that they had received a massive number of complaints about the engorged cow udders in various Mickey Mouse cartoons.

From then on, according to a 1931 article in Time magazine, “Cows in Mickey Mouse … pictures in the future will have small or invisible udders quite unlike the gargantuan organ whose antics of late have shocked some and convulsed others. In a recent picture the udder, besides flying violently to left and right or stretching far out behind when the cow was in motion, heaved with its panting with the cow stood still.”

A Nonprofit Promised to Preserve Wildlife. Then It Made Millions Claiming It Could Cut Down Trees.

What Happens if You Get Caught With Cannabis in a National Park?

Trump Spawned a New Group of Mega-Donors Who Now Hold Sway Over the GOP’s...