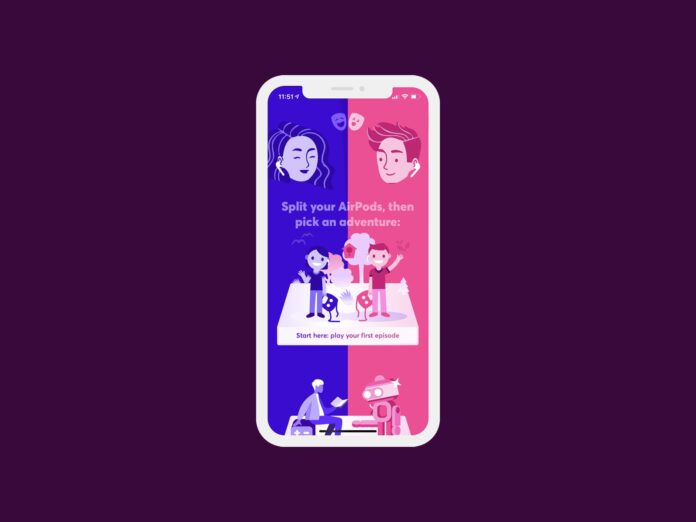 New software applications are cleverly mapping audio to transport users to another space.

Sharing your earbuds with somebody is, in every important aspect, gross. There must be a compelling reason to want to wedge another person’s waxy nub into your external auditory meatus. Such as love, or an unbearably long flight with no other options (the two are not mutually exclusive). Or a shared experience that demands, in some way, that two or more people hear the same audio tracks simultaneously.

For entrepreneur Jonathan Wegener, it was a culmination of events that led him to build a new app that requires shared AirPods. Back in the early 2010s, when Wegener was building the memory app TimeHop, he was also digging Improv Everywhere’s Mp3 Experiments in New York, a “participatory audio experience” that delivered coordinated movement instructions to thousands of people wearing headphones. He deemed the Mp3 Experiment “mind-blowingly cool,” both private and communal: A voice whispering in your ear, a sense of camaraderie with strangers as you participate in the same public performance.

Then, several years later, Apple’s AirPods came out, and Wegener, like millions of others, was stunned by the effortless, wireless audio they offered. He watched two friends in Greece, a couple, split a pair of AirPods so they could listen to music together.

So he started building his next thing: PairPlay, a clever if obvious play on Apple’s “AirPlay.” It’s an iOS app that guides partners, friends, or kids through imagined scenarios within their own homes. It’s part of a larger trend in which audio-focused entrepreneurs are taking advantage of a perfect storm of technology—from increasingly sophisticated processors to sensors that track people’s movements to personal devices that can deliver remarkably good sound.

In PairPlay, a voice oozing Andy Puddicombe–grade calmness tells people to face their AirPod partner, and then delivers two different versions of a scenario, one to each earpiece. There are a series of episodes, more akin to scenes than downloadable podcasts. In one episode, one of the participants is turned into a robot. In another series of episodes, both become secret agents. Another simulates a zombie apocalypse, urging players to race around the house, close the windows, and find hiding spots, all the while not knowing if the other person has been “infected.” (Hits a little close in Covid times.)

I tested a beta version of PairPay with a WIRED colleague, then asked him and his partner, who had just moved to the San Francisco Bay Area, to give it a try together. (Welcome to Silicon Valley! Now try this app.) It was nearly as amusing to watch others participate as it was to try the app myself. They faced each other, with eyes closed, then opened again. Then they tore around the place, grabbing throw pillows and placing them in different rooms, awkwardly laughing, attempting what I think was dancing. After a few minutes they removed the AirPods. One of my pals admitted it was fun, but her partner thought it lacked a fully unspooled narrative. It felt silly to use the app, he said, although he acknowledged that was the point.

PairPlay is free to download and all the content is free. For now. It’s easy to see how the company might offer subscription content down the line. (It’s less “free” if you don’t already have an iPhone and AirPods, as you need both items to use the app.) It’s only available in English, and unfortunately for people who are hard of hearing, there aren’t really any accessibility features, such as captions, built into the app.

While the current version is designed for entertainment, Wegener has drummed up some ideas around enterprise applications too, like a PairPlay app that takes you through office role-play as part of workplace harassment training. For now, the five-person startup has raised an undisclosed amount of funding from several Silicon Valley bold names, including the founders of YouTube, Tumblr, Oculus, Venmo, GroupMe, and EventBrite.

Wegener thinks there’s an emerging market for apps that take advantage of a huge platform of tiny earbuds. Specifically, apps that augment the real-world environment, the way AR app makers are building layers or “lenses” for phone screens and smart glasses. (Wegener has also worked as a designer for Snap.) “We basically consider this screen-free AR,” Wegener says. “It’s a much more compelling experience than holding a screen in front of your eyes and pretending there’s a monster on your floor. We want to work within that constraint of, ‘OK, put your phone away and play with your partner and use your imagination.’”

Wegener stops short of calling PairPlay “spatial” audio, the dynamic, 360-degree sound most often experienced in theaters with lots of speakers. Spatial audio is also a core part of authentic-sounding virtual reality experiences, and the technology is now coming to smaller personal devices too. PairPlay, on the other hand, is “immersive” sound, a two-channel system being delivered to two separate ears.

True spatial audio is having a moment right now, too, due in small part to Apple’s recent announcement that it would offer “thousands” of Apple Music tracks in spatial audio. And some technologists are betting that dynamic, sensor-driven surround sound is the future of giant retail spaces or theme parks, rather than homing in on personal devices.

The aptly-named Spatial is one such company. Cofounded by Apple and Nest alums Calin Pacurariu and Michael Plitkins, Spatial sells software that lets its business customers create multi-channel, dynamic audio “scenes” in real-world spaces outfitted with dozens of speakers. The founders describe a concept they’ve built out for Nike: Imagine if, upon entering a Niketown, you’re identified as a customer who is likely to buy basketball sneakers, and suddenly, the squeaking sounds of rubber soles on a hardwood court surround you?

It’s a compelling use case for 3D audio, but also perhaps uncomfortably futuristic; a technically complex soundscape that also incorporates the more invasive elements of movement-tracking and data collection. Some immersive audio apps might not require you to share a pair of waxy AirPods—but they may very well try to sell a pair of AirPods to you, using auditory cues, when you walk through the door.