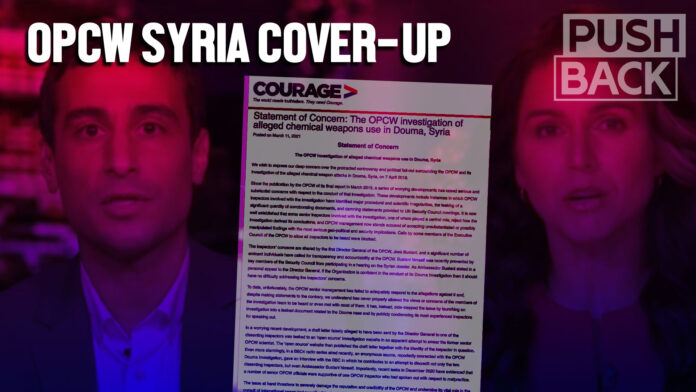 Facing new outcry over the Syria cover-up scandal, OPCW chief Fernando Arias has been caught lying, while the US-UK-France are desperately trying to change the subject. Aaron Maté recaps recent meetings at the EU and UN, where the growing Douma controversy was center stage.

The US-UK-France bombed Syria in April 2018 after accusing it of a chemical weapons attack in the city of Douma. Leaks later revealed that OPCW inspectors found no evidence of a Syrian government chemical weapons attack. But their findings were suppressed, their original report was censored, and the team was sidelined. Rather than having their concerns addressed, the inspectors have since faced a concerted smear campaign.

On April 15, OPCW Director-General Fernando Arias faced questions about the Douma cover-up from Mick Wallace and Clare Daley of the European Parliament. Both Wallace and Daley asked Arias why he has refused to address the Douma cover-up and meet with the dissenting inspectors. The meeting chair, former French cabinet minister Nathalie Loiseau, tried to cut-off the questions and even apologized to Arias for them being posed.  Arias then made a series of excuses and even false claims.

The following day, the Douma scandal was discussed at an Arria Formula Meeting of the United Nations Security Council. The ambassadors of the nations that bombed Syria in April 2018 — the US, UK, and France — tried to dismiss the Douma cover-up scandal as Russian propaganda and refused to offer any substantive comments on the issue.

The invited briefers at the meeting included Hans von Sponeck and Lawrence Wilkerson, two veteran diplomats who have signed a Statement of Concern about the Douma scandal, alongside other notable voices including five former OPCW officials. In his comments, von Sponeck revealed that Arias, the OPCW chief, refused to read the statement and returned it to sender.

The Grayzone’s coverage of the OPCW’s Syria cover-up scandal: https://thegrayzone.com/category/opcw-douma/