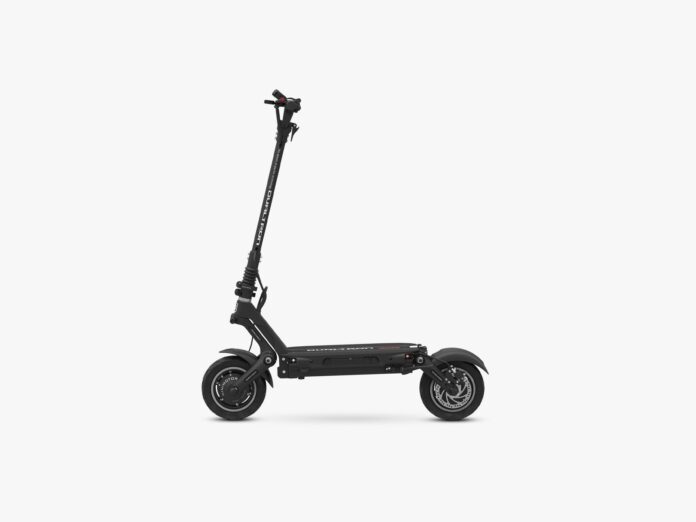 At $2,699, it’s not for everyone. But this electric kick scooter can crush steep hills and will travel well more than 25 miles.

Why would anyone buy an electric kick scooter that costs $2,700? It’s the question I asked myself after a representative from MiniMotors USA suggested I try the company’s new Dualtron Victor. It’s also a question a colleague, who has been riding a sub-$500 e-scooter, asked me.

After several weeks of riding it … well, I get it. This is the only scooter I’ve ridden that feels like it’s made for long treks. I took it on a 24-mile round trip from Brooklyn to New Jersey, and it still had 30 percent battery left in the tank. That’s probably the farthest I’ve ever traveled while standing upright!

It’s so powerful it casually zoomed up steep hills that would’ve crippled most e-scooters, and its suspension makes for a well-cushioned ride. It has a few quirks—and one big con—but this thing is practically perfect.

The Victor arrived on my doorstep in a giant, heavy box. No, I don’t know who Victor is, but I’m glad this e-scooter takes just minutes to set up. Tighten the clamp on the stem, then unfold the handlebars and secure them with their respective clamps.

There’s a hook at the end of the deck, so you can clip on the handlebar stem when you fold it. It keeps the stem from collapsing when it’s stored, and it makes it much easier to carry the Victor. Here is where I should mention my biggest problem: It’s heavy. It’s 73 pounds, which is even more than most electric bikes. Even lifting it to mount a curb is cumbersome. Thankfully, I live in an apartment with an elevator. But there was one day when the elevator wasn’t working and … well, let’s just say the stairwell heard some choice words.

It’s impossible to find a comparable scooter with this much range and power at a significantly lighter weight, but that doesn’t mean I won’t complain about it. If you can manage to lift it, it will fit into a trunk. It’s surprisingly compact when folded.

The Victor is almost fully equipped out of the box. There are front headlights, taillights, and rear and front mudguards. (A bell would’ve been nice.) It also has LEDs to illuminate the underside of the deck, and the Dualtron branding on the handlebar lights up like an RGB gaming PC. You can use the included remote to tweak the colors and lighting patterns if you like.

You’ll need to turn on the power switch on the underside of the deck before you can power the Victor on, via the dashboard on the top-right handlebar. There’s a Mode button here to switch the onscreen ride data, and the third button (with a dot on it) will change the e-scooter’s gear. These three gears will regulate your speed. The first gear, for example, limits you to 15 miles per hour.

On the left handlebar, there are two switches. The first toggles between Eco and Turbo—Eco dramatically slows the e-scooter to conserve power, whereas Turbo will hit the top speed of whatever gear you’re in. The second toggle switches between Single and Dual (more on this later) motors. It’s hard to tell exactly what mode you’re in with these buttons, which can be a problem. Trust me, you don’t want to hit the throttle while accidentally in Dual motor mode without preparing for the kickback.

The display also shows battery life, and it’s one of the more accurate battery indicators I’ve seen. It’s also very easy to read the screen in broad daylight, which is an issue I’ve had with some other e-scooters.

The first thing I noticed on my very first ride with the Victor was how high the deck is off the ground. The handlebars are lower, to compensate, which means that when I was riding the scooter my arms were quite outstretched. Since I’m 6′ 4″, it took me awhile to get used to the reach. MiniMotors USA does sell stem adapters.

I had some of the comfiest e-scooter rides I’ve ever had, though, thanks to the ultrawide tires and the excellent suspension. I only really felt some jerkiness when I went over cobbled road, but I probably would’ve had to get off and walk on any other e-scooter.

Did I mention the Victor can go up to 50 miles per hour? You read that right. That’s because of the 4,000-watt dual-motor design (yes, four thousand). When you toggle on Single motor, you’re going to be restricted to a little under 30 mph. Toggle on Dual, and you’ll feel the torque. Your head will whip back and you’ll be zooming up to 50. I … didn’t quite try that. I can’t legally operate this e-scooter at those speeds in New York City.

In New Jersey, I did give it a spin on a wide stretch of open road that didn’t have any traffic, and I hit nearly 40 mph before I had to slow down. Those speeds are terrifying when there’s nothing protecting you but a metal handlebar and stem. However, you can use the gears to limit your speed to what you’re comfortable with (and what’s legal). You need to make sure you’re legally operating the e-scooter, just like you would for a car.

On the only other dual-motor e-scooter I’ve tried, the Apollo Ghost ($1,500), I was warned never to downshift from Dual to Single motor while riding, in case I hurt myself when it abruptly slowed. MiniMotors USA says you don’t need to worry about this on the Victor; you can engage and disengage the front motor at any time during a ride. I can’t imagine doing this at 30 to 40 mph, so I switched between them only when I came to a full stop. Thanks, Apollo.

The Victor uses powerful hydraulic disc brakes for the front and rear, with ABS so that the wheels don’t lock up. I had zero issues coming to a full stop very quickly, but make sure to hit the rear brake first, so you don’t tip yourself onto your face. You also never really want to slam the brakes when you’re going really fast.

As for range, MiniMotors USA claims 62 miles from the 60-volt LG battery. I rode for 24 miles, and the Victor had 30 percent left in the tank, which doesn’t seem like a lot considering that I also mostly rode it in Single motor mode. Dual mode would exhaust the battery faster. Range also varies depending on the rider and terrain, but I can’t see someone hitting more than 35 or 40 miles on this thing.

Even if that’s not quite the promised 62-mile range, that’s still fantastic.  Most e-scooters I’ve tried tap out around the 20 mile mark, or even 10. The Apollo Ghost sat a little under 20 miles before needing a recharge.

The Victor takes a whopping 20 hours to charge, with the charger that’s included, so don’t expect to quickly top it off. You can buy another charger to juice it up with two (there are two ports), and that will trim the time down to 10 hours, or buy the fast charger for a much more reasonable five-hour recharge. For the price, it’d be nice if a faster charger was included.

The display and brake levers on the handlebar can sit a little loose. Perhaps more annoying is that the tires are not tubeless. Tube tires are more prone to flats and usually require more maintenance. Boo!

MiniMotors USA prides itself on its use of high-quality LG batteries, which it claims don’t degrade as quickly over time. I can’t quite test for that, but the good news is that it’s easy to replace the batteries. For any repairs you might need, the company stocks parts and components, and it has service partners and its own locations around the country if you don’t want to tweak anything yourself.

This is the e-scooter for anyone that puts serious miles on the road every single day. You won’t get range anxiety, which is freeing. And just because you buy an e-scooter that can go 50 miles per hour doesn’t mean you have to use it anywhere near those speeds. My favorite part is how I can crush any hill without going at a snail’s pace. That’s thanks to the heaps of power in the Victor.