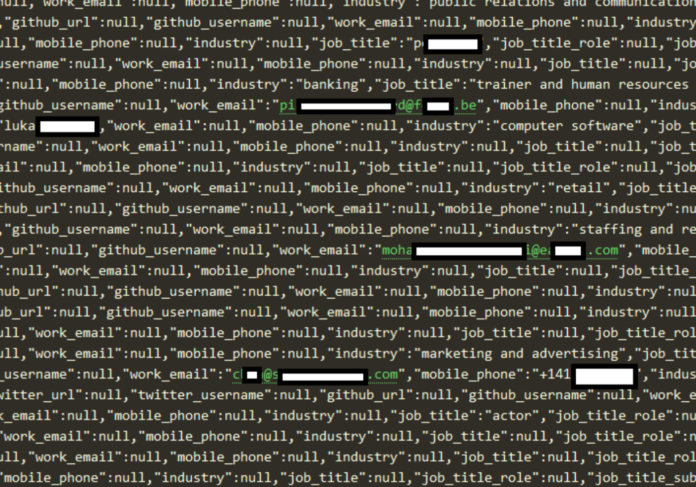 Days after a massive Facebook data leak made the headlines, it seems like we’re in for another one, this time involving LinkedIn.

An archive containing data purportedly scraped from 500 million LinkedIn profiles has been put for sale on a popular hacker forum, with another 2 million records leaked as a proof-of-concept sample by the post author.

The four leaked files contain information about the LinkedIn users whose data has been allegedly scraped by the threat actor, including their full names, email addresses, phone numbers, workplace information, and more.

To see if your email address has been exposed in this data leak or other security breaches, use our personal data leak checker with a library of 15+ billion breached records.

While users on the hacker forum can view the leaked samples for about $2 worth of forum credits, the threat actor appears to be auctioning the much-larger 500 million user database for at least a 4-digit sum, presumably in bitcoin.

The author of the post claims that the data was scraped from LinkedIn. Our investigation team was able to confirm this by looking at the samples provided on the hacker forum. However, it’s unclear whether the threat actor is selling up-to-date LinkedIn profiles, or if the data has been taken or aggregated from a previous breach suffered by LinkedIn or other companies.

Updated on 09/04: A statement from LinkedIn appears to confirm the latter: the company states that the data for sale was not acquired as a result of a data breach, and “is actually an aggregation of data from a number of websites and companies.”

“This was not a LinkedIn data breach, and no private member account data from LinkedIn was included in what we’ve been able to review.”

Following “the dissemination of user data, including IDs, full names, email addresses, telephone numbers” by the threat actor, Italy’s privacy watchdog began an investigation into the incident on Thursday.

The Italian authority said that the country has one of the highest LinkedIn subscriber counts among European states and called on affected users to “pay particular attention to any anomalies” related to their phone number and their account.

Updated on 10/04: It seems that other threat actors are looking to piggyback on the leak. On Friday, a new collection of LinkedIn databases has been put for sale on the same hacker forum by another user – for $7,000 worth of bitcoin.

The new author claims to be in possession of both the original 500-million database, as well as six additional archives that allegedly include 327 million scraped LinkedIn profiles:

If true, this would put the overall number of scraped profiles at 827 million, exceeding LinkedIn’s actual user base of 740+ million by more than 10%. This means that some, if not most, of the new data sold by the threat actor might be either duplicate or outdated.

Based on the samples we saw from the leaked files, they appear to contain a variety of mostly professional information from LinkedIn profiles, including:

An example of leaked data:

What’s the impact of the leak?

The data from the leaked files can be used by threat actors against LinkedIn users in multiple ways by:

The leaked files appear to only contain LinkedIn profile information – we did not find any deeply sensitive data like credit card details or legal documents in the sample posted by the threat actor. With that said, even an email address can be enough for a competent cybercriminal to cause real damage.

Particularly determined attackers can combine information found in the leaked files with other data breaches in order to create detailed profiles of their potential victims. With such information in hand, they can stage much more convincing phishing and social engineering attacks or even commit identity theft against the people whose information has been exposed on the hacker forum.

If you suspect that your LinkedIn profile data might have been scraped by threat actors, we recommend you:

Also, watch out for potential phishing emails and text messages. Again, don’t click on anything suspicious or respond to anyone you don’t know.