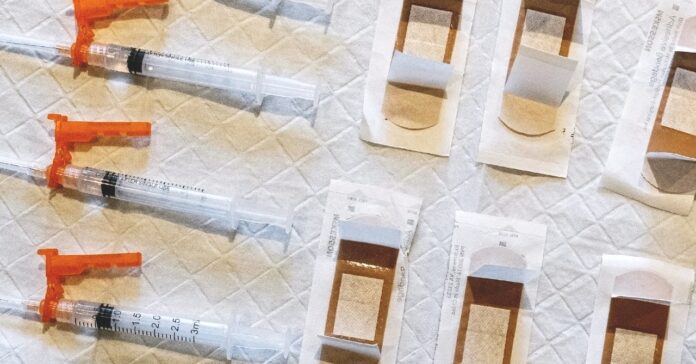 The federal agency will allow people living with organ transplants, undergoing cancer treatments and taking some medications to get a third shot.

Millions of Americans whose immune systems have been undermined by disease or medical treatment, and who are already fully vaccinated against Covid with the Pfizer or Moderna vaccines, will be allowed to get a third dose, according to federal decisions made Thursday night and Friday.

The decisions by the Food and Drug Administration and the Advisory Committee on Immunization Practices, an outside advisory group to the Centers for Disease Control and Prevention, let US health policy catch up to research showing that transplant recipients and cancer patients are not fully protected by two shots—and also to patients who were already getting unapproved doses on their own. Effectively, it changes the authorized vaccine series for people with weak immune systems from two doses to three, with the third dose delivered 28 days or more after the second.

But it isn’t a blanket change. It covers only people with what the FDA and the ACIP call “moderate to severe immune compromise.” It allows the third shots only for those age 12 and older, because no vaccine has been authorized for pre-teens or kids. And it does not approve any extra shots for the immune-impaired people who are among the 12 million recipients of the single-dose Johnson & Johnson vaccine, because there isn’t yet data to predict their reactions.

Both the FDA and the committee were careful to not call the third doses “boosters,” hoping to draw a distinction between improving initial protection in people with low immunity, and renewing immunity in the rest of the population if vaccine effectiveness fades against future variants. But, globally, the move might still be controversial. The World Health Organization has begged rich nations to stop delivering extra doses until poor nations can obtain more shots.

The decision to add a dose for immune-compromised people has been coming for a while. The ACIP, which is a group of medical researchers and representatives of professional societies who help the CDC shape vaccine policy, examined evidence for the move last month. CDC director Rochelle Walensky flagged its imminent arrival Thursday afternoon in a White House Covid-19 response team briefing. “This action is about ensuring our most vulnerable—who may need an additional dose to enhance their biological responses to the vaccines—are better protected against Covid-19,” she said.

The FDA changed its guidance on the vaccines late Thursday night, amending the Emergency Use Authorizations for the Pfizer and Moderna formulas to include the three-dose series and setting the stage for the committee, which had already scheduled a discussion Friday morning. That meeting ended in a unanimous vote in favor of third doses.

But the immediate trigger for the change—alongside the surge in the extra-contagious Delta variant that is swamping the US—was studies from Canada and France that were published Wednesday and Thursday in the New England Journal of Medicine (though shared with the federal agencies beforehand). Both documented that small groups of transplant recipients who had received two vaccine doses had low levels of antibodies, but gained significant immune protection after a third dose.

“I really believe these results are definitive; I think it’s a slam dunk,” Atul Humar, a physician and director of transplantation at the University of Toronto and senior author on the Canadian trial, said Thursday before the FDA and CDC acted. That study, in 120 organ transplant patients, showed not only antibody improvements, but also higher T-cell responses in the third-dose recipients compared to participants who received a placebo. “I think the results are convincing enough that this will result in a change in regulatory guidance, recommending a third dose for these patients,” he said.

Today, the committee voted to approve the third dose for people in “moderate to severe immune compromise.” That includes anyone who received an organ transplant and is taking anti-rejection drugs; is undergoing treatment for cancers in various organs, or varieties of leukemia; has received stem-cell transplants or CAR-T cells as part of cancer treatment; has advanced (or untreated) HIV or a primary immune-deficiency syndrome; or takes high doses of steroids, TNF blockers, or other immune system-suppressing drugs.

During the Friday meeting, officials estimated that the change might cover 7 million people, the 2.7 percent of US adults affected by a serious immune deficit. But the committee did not stretch the authorization to a potentially larger group who experience impaired immunity as a result of chronic illnesses.

“The intent is to limit this to individuals which are considered under the EUA to be in moderate or severe” immunosuppression, Dr. Amanda Cohn of the CDC said during the meeting. “That would not include long term care facility residents or persons with diabetes, persons with heart disease—those types of chronic medical conditions are not the intent here.”

That did not sit well with some members of the public who spoke during the meeting’s public comment period. “I want to stress the importance of recommending third doses for people in all categories of immune compromise,” said a woman connecting to the video session from Tennessee. “Please give all of us who are immune-compromised a fighting chance to protect ourselves.”

Evidence has been building for several months that the Covid vaccines, which create robust protection in healthy people, have not been doing the job for immune-compromised ones. Right after the FDA authorized the mRNA vaccines in December, a team from the Johns Hopkins University School of Medicine put out an invitation on social media for immune-suppressed people to enroll in a registry so their immune responses to vaccination could be documented. In the spring, the team published their first analyses: After their first dose, only 17 percent of participants made antibodies to a section of the virus’s spike protein; only 54 percent showed an antibody response after the second dose. (In the manufacturers’ clinical trials, 100 percent of vaccine recipients developed antibody responses after their first dose.)

Another study, from Weill Cornell Medical Center, found that only 25 percent of kidney transplant recipients developed detectable antibodies. A team at the University of Pittsburgh warned of “virtually non-existent” responses to the vaccine in leukemia patients. A project shared by the Washington University School of Medicine and the University of California, San Francisco showed that antibody levels can vary in patients with chronic inflammatory diseases—such as rheumatoid arthritis, lupus and multiple sclerosis—depending on which immune-suppressing drugs they take.

To some patients and their physicians, it was already obvious that the vaccines were not protecting them. Despite being fully vaccinated, they came down with Covid—not the mild breakthrough cases experienced by fully immune people, but serious illness requiring hospitalization. Data cited by the CDC Friday shows that immune-impaired people shed the virus for longer and are more likely to infect their household contacts than healthy people; they comprise up to 44 percent of vaccinated people hospitalized with breakthrough infections. And a study published online last month in the journal Transplantation estimates that organ transplant patients who have received two vaccine doses are 82 times more likely to develop breakthrough infections than healthy fully vaccinated people, and 485 times more likely than healthy vaccinated people to be hospitalized with Covid or die.

Online communities of patients began sharing information about their increased risk, and some of those who hadn’t fallen ill began hacking a remedy: seeking out third doses by finding sympathetic healthcare workers, pretending to lose their vaccine cards, or crossing state lines so the third shot wouldn’t be recorded in their home state’s registry. (According to CDC data presented at the Friday meeting, more than 1 million Americans may have received unauthorized boosters.)

The legality of their actions was blurry, since at the time the FDA’s authorization specified a two-dose series, but their instincts were good. In June, the Hopkins group published a study of immune responses in 30 organ transplant recipients who sought out third shots on their own. Only six of the 30 had mounted any antibody response after their second shots, although by that point they should have been fully protected. After their third shots, 14 showed some improvement, and 12 had antibody levels considered high enough to protect them against infection.

Other countries had already started advancing a three-dose policy. In May, France made a third dose routine for immune-impaired individuals. In July, the Hungarian government said it would offer boosters to anyone who asked starting in August, and the Israeli government said it would immediately offer third shots to anyone over 60, to combat the well-known problem that immune responses decline as people get older. So far this month, officials in Germany and the United Kingdom have said they will offer third shots to both those groups, and to other people who might be at greater risk, starting in September.

But those offers are controversial, because they represent additional vaccine consumption in rich countries which have already used most of the doses produced so far. The World Health Organization has called for a moratorium on boosters until at least the end of September, or until 10 percent of every country’s population can get the shots. In an op-ed published Thursday in Time, director-general Tedros Adhanom Ghebreyesus called them “ethically objectionable, when considering the hundreds of millions of people who have not yet received a single dose in the world’s poorest countries.”

And improving the protection of the immune-impaired could open the door to using third doses for other reasons: to keep up with fast-evolving variants, or to shore up the deficiencies of less-effective vaccines. Researchers at the Council on Foreign Relations said Thursday afternoon that if all 37 countries that are examining the possibility of deploying boosters—for any reason—started giving the shots, it would increase global demand by more than 1 billion doses.

It’s possible that the rule change will increase demand in the US, too—beyond the several million people who are eligible, that is. The third doses could be made available as soon as this weekend, and committee members said Friday that there would be no requirement that people prove their immune status with a test or doctor’s letter before getting the additional shot. That raises the possibility that otherwise healthy people could seek out the shot as a booster, against federal authorities’ intentions and the wishes of much of the world.

More From WIRED on Covid-19