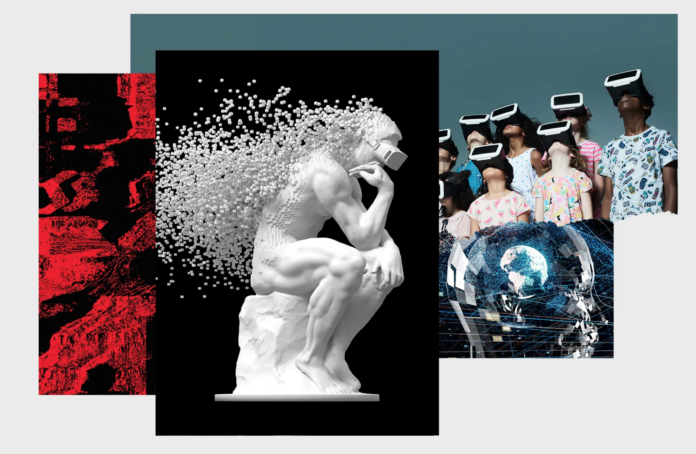 For decades, VR has failed to live up to expectations. Yet somehow, it keeps receiving more chances and more resources. It has been seven years since Palmer Luckey appeared on the cover of WIRED magazine. The June 2014 issue declared, “This kid is about to change gaming, movies, TV, music, design, medicine, sex, sports, art, travel, social network, education—and reality.” In 2016, Facebook acquired his virtual reality company, Oculus, for $2 billion. It now invests $18.5 billion annually into research and development, and Facebook Reality Labs, the company’s Augmented Reality/Virtual Reality division, accounts for as much as 20 percent of its entire workforce, with no sign of slowing down. But despite the many years, billions of dollars, and year-long pandemic requiring at-home entertainment, the results thus far have been pretty lackluster. The headsets are spiffier and the games are more lucrative, but our minds nevertheless remain collectively un-blown.

It’s not just Facebook and Oculus. In May 2016, WIRED’s cover story introduced readers to Magic Leap, “A mysterious startup, a mountain of money, and the quest to create a new kind of reality.” Magic Leap was developing a set of semitransparent “Mixed Reality” goggles that could integrate virtual objects into the user’s physical environment. The company raised more than $2 billion in funding from A-list Silicon Valley investors. It looked like the biggest leap forward in hardware since the iPhone. But the actual product never lived up to the breathtaking demo. The company laid off 1,000 employees in 2020, hired a new CEO, and pivoted to focus on narrower enterprise applications. The Mixed Reality future is still, well, the future.

Somehow, none of these less-than-ideal outcomes have affected confidence in VR. In fact, Facebook doubled down on Monday, announcing a new group within the company dedicated to developing its Horizons VR world. Mark Zuckerberg recently told Facebook employees that over the next five years he expects to transition “from people seeing us as primarily being a social media company to being a metaverse company.” Silicon Valley billionaires and venture capitalists, it seems, are incapable of saying no to a fancy headset with a big dream. And this dates back 35 years—Jaron Lanier was the Palmer Luckey of the 1980s and early 1990s!

The technology is always about to turn a corner, about to be more than just a gaming device, about to revolutionize fields like architecture, defense, and medicine. The future of work, entertainment, travel, and society is always on the verge of a huge virtual upgrade. VR is a bit like a rich white kid with famous parents: It never stops failing upward, forever graded on a generous curve, always judged based on its “potential” rather than its results.

One reason that VR has been offered such an endless string of second chances (VR’s proverbial lineage, if you will) is that it has played an outsized role in the popular science fiction that our collective image of the future is built around. William Gibson coined the term “cyberspace” in his 1984 book Neuromancer. The term later became synonymous with the World Wide Web, but Gibson’s initial rendering was of a virtual realm that “console cowboys” could enter and exit. Gibson and his cyberpunk peers heavily shaped the culture of 1980s tech—before the dotcom boom, before the tech bros.

When Lanier unveiled his bulky head-mounted display and dataglove in 1987, he was inviting tech hobbyists to be the first inhabitants of the virtual future they had glimpsed in cyberpunk novels. Neal Stephenson’s 1992 Snow Crash and Ernest Cline’s 2011 Ready Player One later were massive science fiction hits whose stories unfolded in a future where VR is a fixture.

Just as the current billionaire space race is, at least in part, evidence that inside every tech billionaire is an inner child who dreamed of flying his own rocket ship, the VR arms race is premised on an assumption that mass adoption is inevitable—the only question is when that future will arrive, and which company will get phenomenally wealthy when it does.

This current trajectory is not so different from the rise and fall of VR in the late 1980s and early 1990s. VR in the 1990s was already making inroads in major industries—military and flight simulations, architectural design, and medical imaging. The titans of the gaming industry were investing heavily in VR arcades. Gaming was going to be the beachhead for mass public adoption. The inexorable force of Moore’s law was bound to do the rest—VR rigs were only going to get cheaper, faster, and better. The race to find VR’s “killer app” sure wasn’t far behind. But the tech was too slow, too cumbersome, too expensive. The VR arcades were ultimately less appealing than the Sony PlayStation. And then the World Wide Web and the dotcom boom gave the tech world something else to get excited about.

Life moved online. The video game industry blew up. Networked computers penetrated every facet of our lives. Software ate the world. But our interface with the digital world continued to be a screen. The screens got smaller, lighter, and more mobile, with higher resolution and fancier graphics. But the closest we have come to Neal Stephenson’s Metaverse has been Second Life. Instead of Ernest Cline’s Oasis, we have World of Warcraft.

The trouble with trying to predict the digital future is that sometimes you can get the vision right, but get the dates completely wrong. That’s what happened to General Magic, the legendary 1990s startup that tried to develop handheld digital communications devices (smartphones, basically) 15 years too early. The company was a failure, but its alumni would later run the teams that developed the iPhone and Android operating systems.

It’s tempting to look at that first VR boom-bust cycle through a similar lens. Sure, the Nintendo Power Glove and the Battletech VR gaming centers were commercial flops. The technology wasn’t ripe yet. They were just ahead of their time. This time will be different.

But the trouble circa 2021 is that VR’s technical problems have all basically been sorted out: The headsets are lightweight and affordable, thanks to massive investments from Big Tech, and there are hundreds of fairly successful VR gaming titles. As a technical matter, we could pretty much cobble together a 1.0 version of the Metaverse or the Oasis next week. VR’s limiting flaw might instead be on the demand side—what I have elsewhere termed the “Field of Dreams Fallacy.” (“If you build it, they will come.”) Immersive VR gaming sounds neat, but it turns out that swinging a virtual sword gets tiring pretty quickly. The most popular games today aren’t the ones that fully immerse players in a virtual world; the screen interface isn’t a problem that particularly needs to be solved.

Beyond gaming (and, I suppose, porn—there’s always porn), it isn’t clear what other thirsts Virtual Reality are meant to quench. Immersive virtual gatherings could be a slight step above endless Zoom meetings. But, after this pandemic year, does anyone really want their Zoom meetings to occupy more of their attention? VR enthusiasts often talk about virtual vacations to exotic locales—strap on a headset and you can experience a visit to the Grand Canyon with your family. But this misdiagnoses the whole point of a vacation. A VR trip to the Grand Canyon is not a vacation. It isn’t even a trip!

VR will surely be useful to fields like flight simulation, medical imaging, and architectural design—but that seems a lot less revolutionary once you realize that the first VR boom successfully broke into most of these industries thirty years ago. Magic Leap and Oculus for Business aren’t so much radically disrupting outdated industries as they are profitably upgrading the outdated VR systems for longstanding client bases.

Mixed Reality Goggles suffer from the same problem. They sound so cool, until you start wondering what you’d actually use them for. It’s tempting to think that if Magic Leap didn’t live up to the hype, some other competitor surely will. But the underlying problem is that, there just aren’t many situations in your daily routine where the MR goggles would make it off the shelf.

Seven years ago, Oculus Rift was going to blow our minds and change everything. Today, we’re still waiting, and no one seems to be asking hard questions about what’s taking so long.

The VR arms race won’t slow down anytime soon. Investors will continue to pour billions into research and development, chasing millions in revenues. They’ll keep treating every failed startup and missed projection as evidence that they have the right vision of the technological future, but they’re still arriving too early. The metaverse, apparently, is an idea that cannot fail—it can only be failed.

Imagine all the good that the tech industry and venture capital could do if they just had different shared visions of what the future looked like. What if, instead of space travel and virtual worlds, our tech billionaires had been raised on exciting stories of a future with fast, efficient mass transit or a living wage for all workers? What would it be like if other social goals were afforded the same leeway and endless hype cycles we give to VR?

I’m sure the rigs and goggles of 2026 will be better and more affordable than the ones we have today. I’m just not sure what else we will use them for. The problem isn’t the technology—it’s the vision. And the trouble with imagining the future through sci-fi action adventures is that it obscures the mundane everyday uses of technology.

Are we ever going to start judging VR on its performance instead of its pedigree?