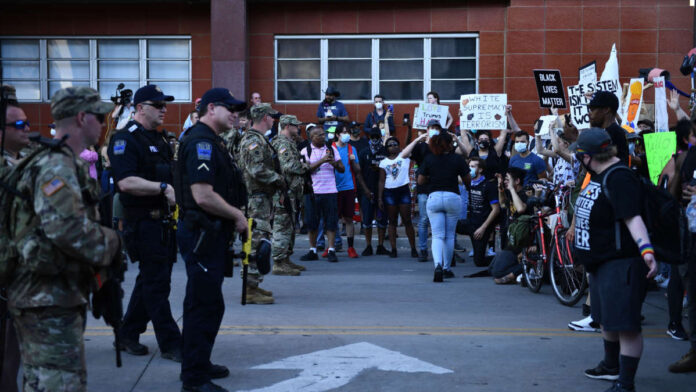 Republican Oklahoma Gov. Kevin Stitt has signed a new law that would grant protections for drivers who hit and kill protesters while attempting to drive away from a protest and implements harsher penalties on people who block roads or highways during a protest. Democrats and activists decried the law as stifling protest and citizens’ First Amendment rights.

HB 1674, which Republican legislators passed earlier this week, grants civil and criminal immunity for drivers who “unintentionally” harm or kill protesters while “fleeing from a riot,” as long as there is a “reasonable belief that fleeing was necessary.”

“This legislation is not about safety,” said Nicole McAfee, director of policy and advocacy at the Oklahoma American Civil Liberties Union (ACLU), in a statement. “It is about centering the convenience of people who already have the power and protections of the law. It is about responding to calls for transparency by protesters and the media with the criminalization of those transparency efforts.”

Broad language in the law may allow for clashing interpretations on how protections are granted. Without a definition in the bill for what circumstances would be deemed “necessary” or “unintentional,” the bill leaves the language up to potentially broad interpretation.

Brandon Tucker, policy director of the ACLU in Tennessee, noted the danger of laws with such broad language on CNN when talking about similar legislation being considered by legislators in Tennessee that would grant immunity to drivers who “unintentionally” kill a protester and criminalize certain forms of protest. “This vague and troubling suppression of free speech can easily be abused, leading to the criminalization of protesters’ words and beliefs,” Tucker said.

The bill also increases penalties for protesters who block roadways during a protest. It makes blocking a roadway a misdemeanor, punishable by up to a year in prison and a hefty $5,000 fine. In the wake of nationwide protests for Black lives, many have said the bill is racist and seeks to push harsher penalties on oppressed people who often need to protest in order to make their voices heard.

“In this state, it is oftentimes the marginalized voices that aren’t oftentimes heard, and these are why they do the protests that they’ve done,” Young Democrats of America President and Oklahoman Joshua Harris-Till told Public Radio Tulsa last month.

The bill comes as Republicans are pushing through a wave of anti-protest legislation across the country. Just in this legislative session, the GOP has filed 81 anti-protest laws in 34 states as backlash against the growing movement for Black lives. Many, such as the bill just passed in Florida, similarly grant protections to drivers who harm protesters. Others seek harsh penalties on protesters and widen the definition of the word “riot” in order to target demonstrators.

“These bills talk about ‘riots,’ but the language that they use is so sweeping that it encompasses way more than what people imagine,” Elly Page, legal adviser for International Center for Not-for-Profit Law, told USA Today. Many bills, Page said, criminalize “legitimate First Amendment-protected protest.”

Some bills also target low-income protesters by making them ineligible for government aid like student loans and food stamps if they’re convicted with protest-related charges. “It’s so devious, selectively silencing people,” Page told USA Today. “This is the kind of penalty that really impacts certain communities and not others.”

Republicans are likely passing these bills with the knowledge that right-wing protesters are much less likely to face violence and hostility from law enforcement than left-wing protesters are. Many of the states considering anti-protest laws already have punishments for rioting, so activists have been left to speculate about what Republicans are actually trying to achieve.

“These anti-freedom policies are passed with a veil over their true intentions,” said Tamya Cox-Touré, executive director of the Oklahoma ACLU, in a statement about the recently passed law, adding that the laws aim “to chill speech, criminalize accountability, and let us all know that a majority of the legislature cares more about protecting the deadly power of the state than they do about rights and liberties, or even public safety.”