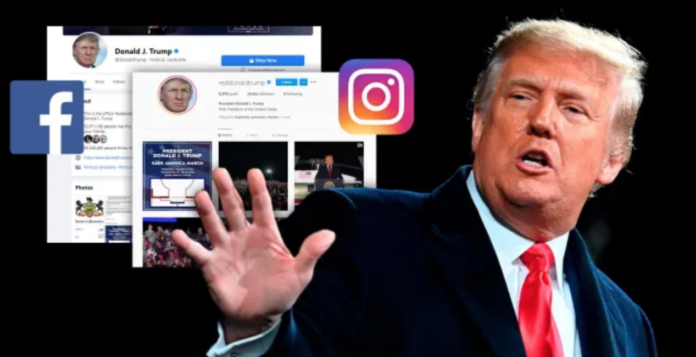 Donald Trump will be suspended from Facebook and Instagram indefinitely and at least until the end of his time in office, Mark Zuckerberg has said, as a consequence of his support for the rioters who stormed the US Capitol on Wednesday.

The US president was initially suspended from the social network for just 24 hours, as a result of two posts shared to the platform in which he appeared to praise the actions of the rioters.

In a post to Facebook on Thursday Zuckerberg said the suspension will last much longer. “The shocking events of the last 24 hours clearly demonstrate that President Donald Trump intends to use his remaining time in office to undermine the peaceful and lawful transition of power to his elected successor, Joe Biden,” Facebook’s CEO wrote.

“We believe the risks of allowing the President to continue to use our service during this period are simply too great. Therefore, we are extending the block we have placed on his Facebook and Instagram accounts indefinitely and for at least the next two weeks until the peaceful transition of power is complete.”

The development came after Trump’s 12-hour ban from Twitter ended at 7am Washington time. . Trump did not immediately return to the social network. A few hours earlier, his deputy chief of staff, Dan Scavino, had shared on his behalf a short statement committing to an “orderly transition” of power – albeit maintaining that he “totally disagrees with the outcome of the election”.

The initial suspensions, the first the president had faced in his four-year term of office, were derided by many as not being severe enough for the harm inflicted by Trump’s posts, which appeared to support and encourage the far-right mob that stormed the US Capitol building.

“Facebook, Twitter and YouTube must terminate Donald Trump’s social media accounts,” said Eric Naing, media relations officer for American civil liberties group Muslim Advocates. “After today’s mob violence inside the US Capitol, it is clear that the president’s social media accounts are the world’s most prominent organising tool for violent white nationalists. For years, social media companies have done little or nothing at all while President Trump used their platforms to foment violence, spread hate and put people’s lives in danger – all in clear violation of the companies’ policies.

Comedian Sacha Baron Cohen added his voice to the demands, tweeting: “Facebook and Twitter have spread Trump’s lies and hate and helped radicalize the extremists who attacked the Capitol. Suspending Trump for a few hours is NOT ENOUGH!” He added the hashtag #BanTrumpSaveDemocracy.

Calls to go further than simply labelling or restricting posts also had some unlikely supporters. Alex Stamos, the former head of information security at Facebook and now a Stanford professor working on technology and civil liberties issues, said that the events of Wednesday should help tech companies realise a line had been crossed.

“Twitter and Facebook have to cut him off,” Stamos tweeted. “There are no legitimate equities left and labelling won’t do it. The last reason to keep Trump’s account up was the possibility that he would try to put the genie back in the bottle but as many expected, that is impossible for him.

“There will always be the alt-sites and peer-to-peer, but at least the damage he does would be more contained.”

If Trump does continue to violate Twitter rules to the point of being banned from the site, a community of alternative social networks already exists to provide him with an alternative platform.

On Parler, a Twitter clone built to allow users to “speak freely” and populated largely by the far-right, a new account claiming to be the president gained more than 13,000 followers in a matter of hours before being taken private on the website.

The president already has a “verified account” on another social network, Gab, with a similar focus, but that account is currently no more than a shell which reposts tweets from Twitter. It is not clear that it is run by the president’s team, rather than Gab itself.

… we have a small favour to ask. You’ve read

in the last year. And you’re not alone. Millions are flocking to the Guardian for open, independent, quality news every day. Readers in all 50 states and in 180 countries around the world now support us financially.

As we prepare for what promises to be a pivotal year for America, we’re asking you to consider a gift to help fund our journalism.

Donald Trump’s presidency is ending, but America’s systemic challenges remain. From broken healthcare to corrosive racial inequality, from rapacious corporations to a climate crisis, the need for fact-based reporting that highlights injustice and offers solutions is as great as ever.

We believe everyone deserves access to information that’s grounded in science and truth, and analysis rooted in authority and integrity. That’s why we made a different choice: to keep our reporting open for all readers, regardless of where they live or what they can afford to pay. Powerful journalism drives change; this is some of the high-impact reporting that Guardian readers funded in 2020.

In these perilous times, an independent, global news organisation like the Guardian is essential. We have no shareholders or billionaire owner, meaning our journalism is free from commercial and political influence.

If there were ever a time to join us, it is now. Your funding powers our journalism. Every contribution, however big or small, will help us reach our goal.