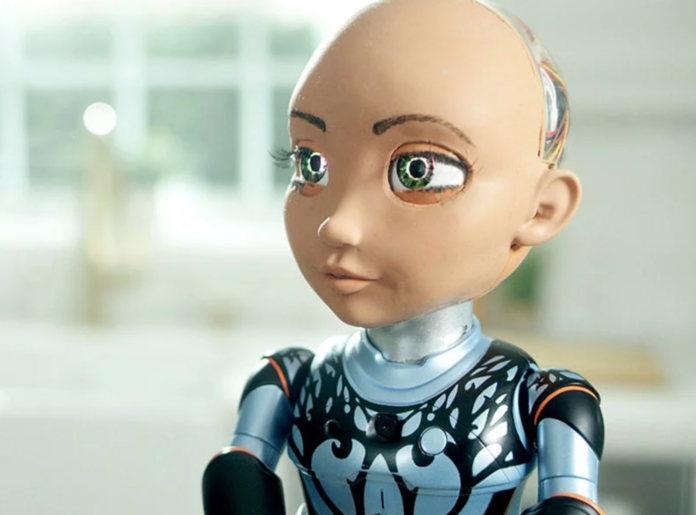 Every day, artificial intelligence – and robotics at large – become more and more clever and capable. there is still a fascination for devices capable of enhancing the use of our bodies and humanoid bots (just meet little sophia), but the evolution of AI now means everyday objects are becoming equally as smart. with robotics comes the idea of creating life. 2019 saw a distinct change in direction compared to other years, as many living organisms in nature were recreated by mankind. whether made to correct climate change or to benefit daily tasks, our round-up of 2019 highlights the diversity in robotics, especially bio bots.

continuing review of 2019, we look back at our TOP 10 robotic stories that grabbed our and, most importantly, designboom readers’ attention over the past 12 months. 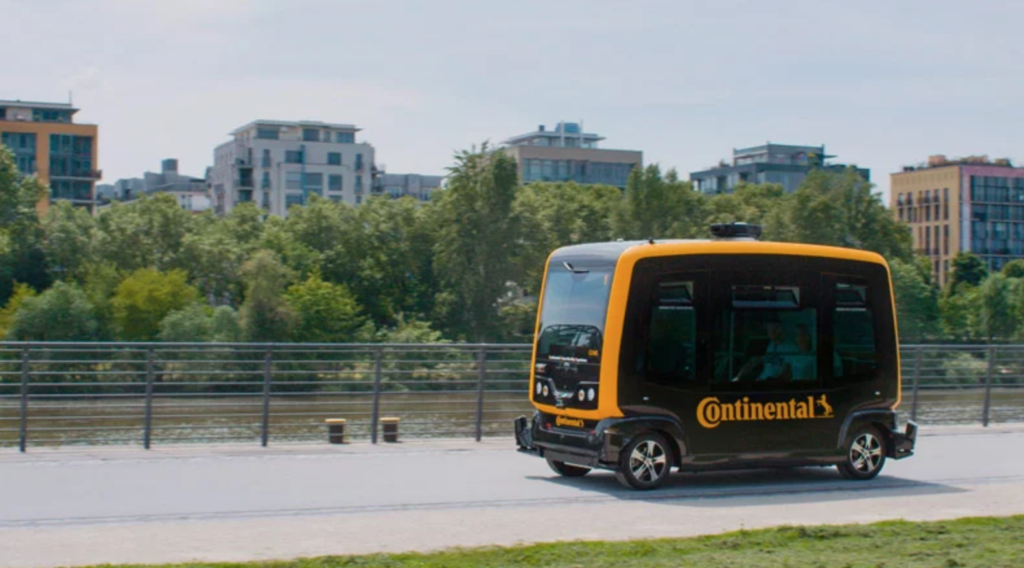 continental unveiled a delivery system at CES 2019 in las vegas, tapping the help of robotics company ANYbotics. the system uses four-legged robot dogs to hop in and out of its driverless delivery vans, carrying packages right up to someone’s door. continental‘s completely autonomous robo-taxi, called the ‘CUbE’, carries ANYbotics’ robot dogs until it arrives at the correct destination, sending them out through the back door of the car to drop the package off at the recipient’s doorstep.

2 – sophia the robot now has a baby sister, little sophia 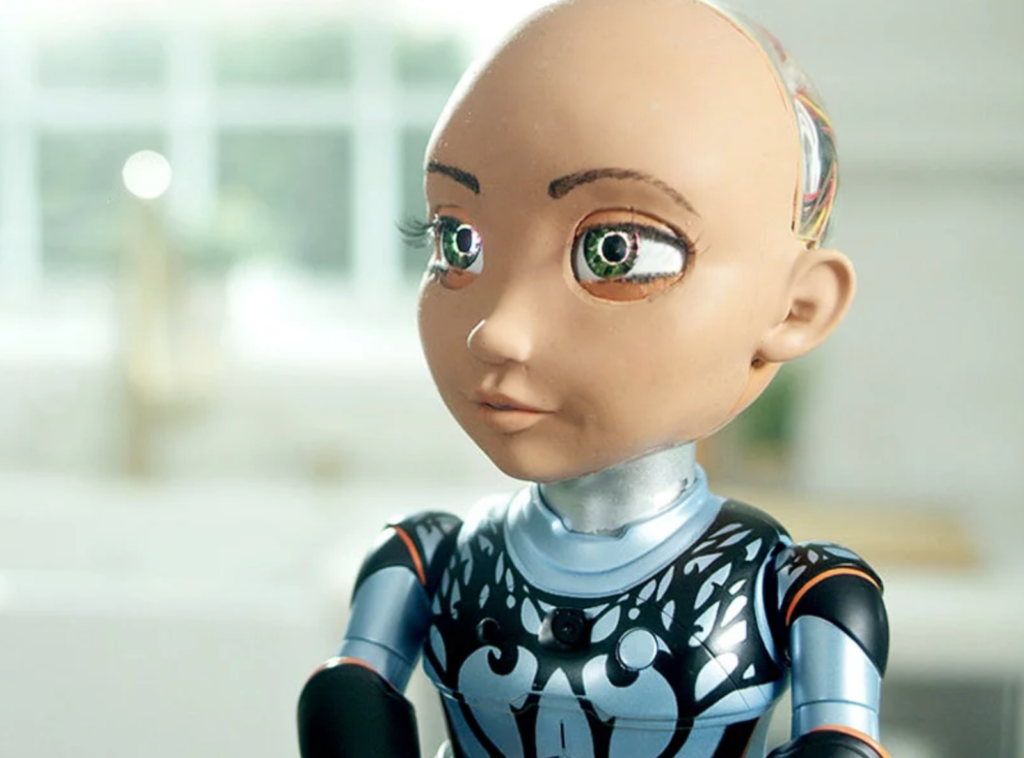 hanson robotics is the hong kong and los angeles-based creator of sophia the robot, the eerily life-like humanoid, which was granted citizenship in saudi arabia. she now has a 14-inch sibling: little sophia, who wants to help kids learn how to code in a safe experience. literally walking in the footsteps of her older sister, little sophia can talk, sing, play games and, tell jokes. her main objective, however, is to teach kids — ‘especially girls’ — between the ages of seven and 13 about STEM, coding and AI. 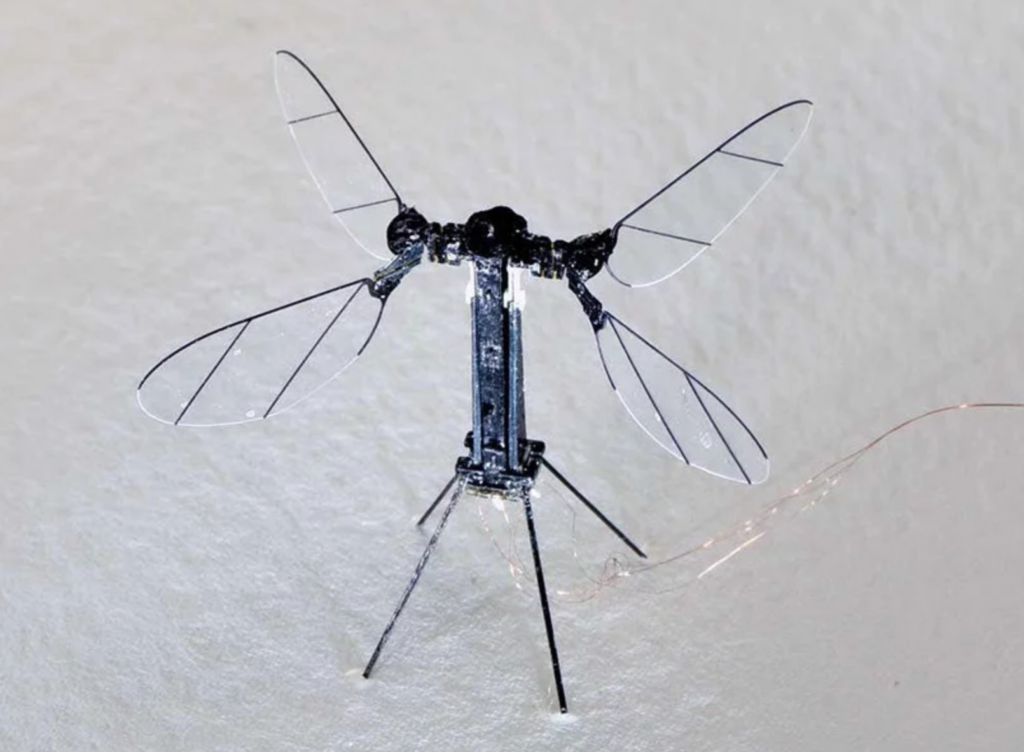 a tiny flying machine, called robobee, by researchers at harvard has been freed from its power source, flitting closer to a future that includes autonomous insect drones. a recent demonstration shows the little robot achieving self-powered flight with the help of six tiny solar cells that have been strapped to the device. developed by noah jafferis, the flying bot weighs just 259 milligrams, which is half the weight of a paperclip. it achieves flight using a set of four wings that flap at a rate of 170 times per second. 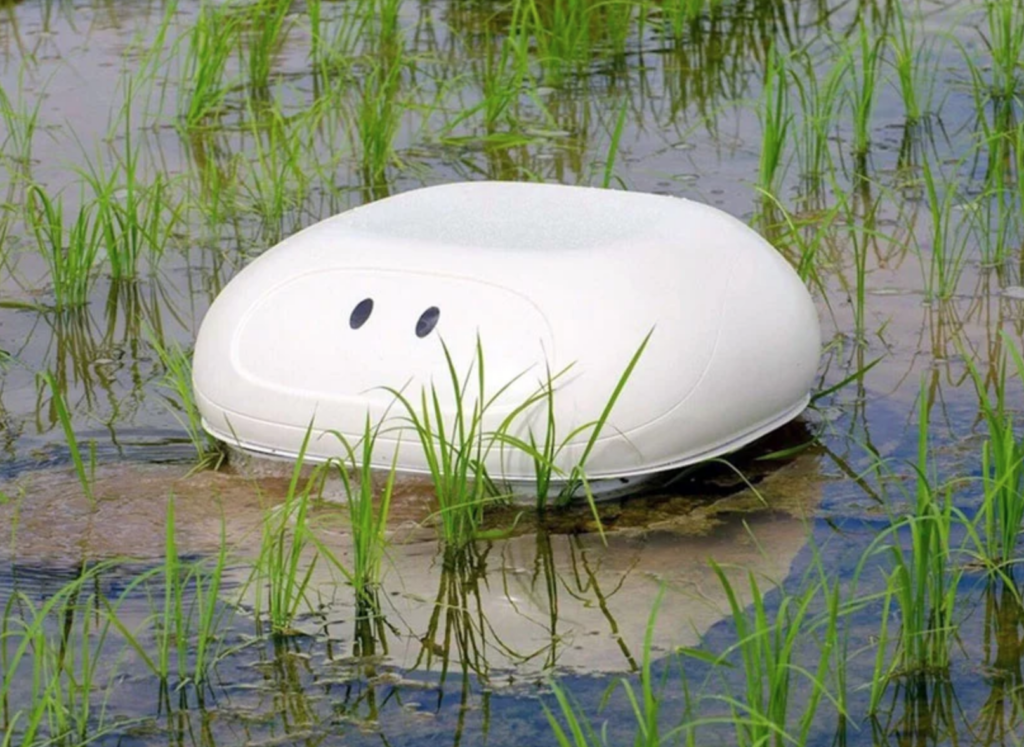 an engineer for nissan has built a robot duck to help farmers reduce the use of herbicide and pesticide on their rice crops. the compact robot is designed to mimic the natural use of ducks that paddle around in flooded paddy fields, tear up weeds and snack on insects, with their manure acting as additional fertilizer. it weighs 1.5 kilograms and is about the size of a large robot vacuum cleaner. two rotating rubber brushes on its underside take the place of a duck’s feet, which oxygenate the water by stirring it up and preventing weeds from taking root.

5 – IKEA is working on robotic furniture designed for small spaces 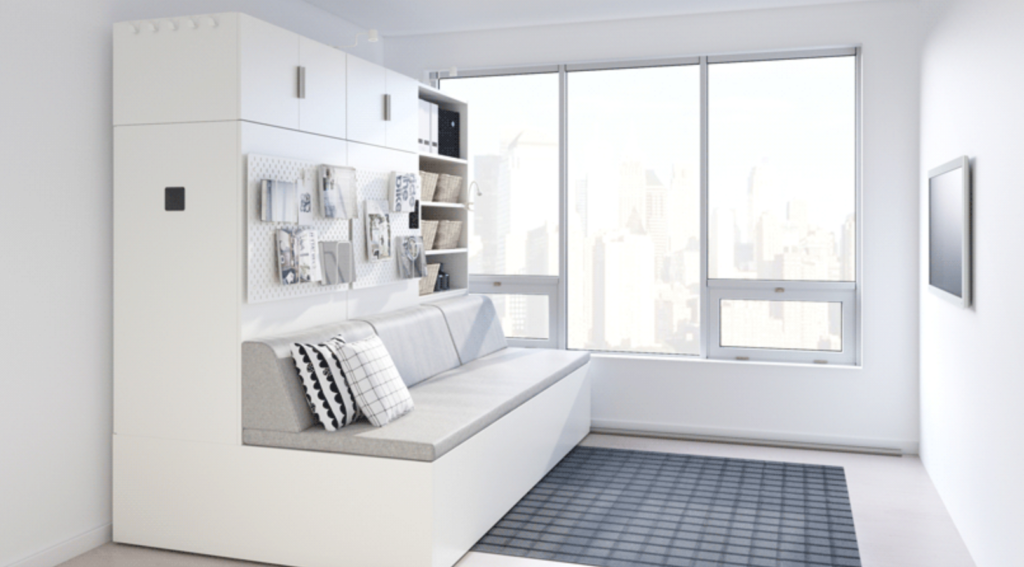 IKEA is collaborating with american startup ori to develop a robotic furniture system called ROGNON. designed for small space living, the large storage unit is controlled by touchpad and can slide across a room to divide it into two living spaces, containing a bed, desk and a couch, which can be pulled out when needed. the L-shaped storage solution – and its multiple compartments and pullout features – slides along a bottom rail. 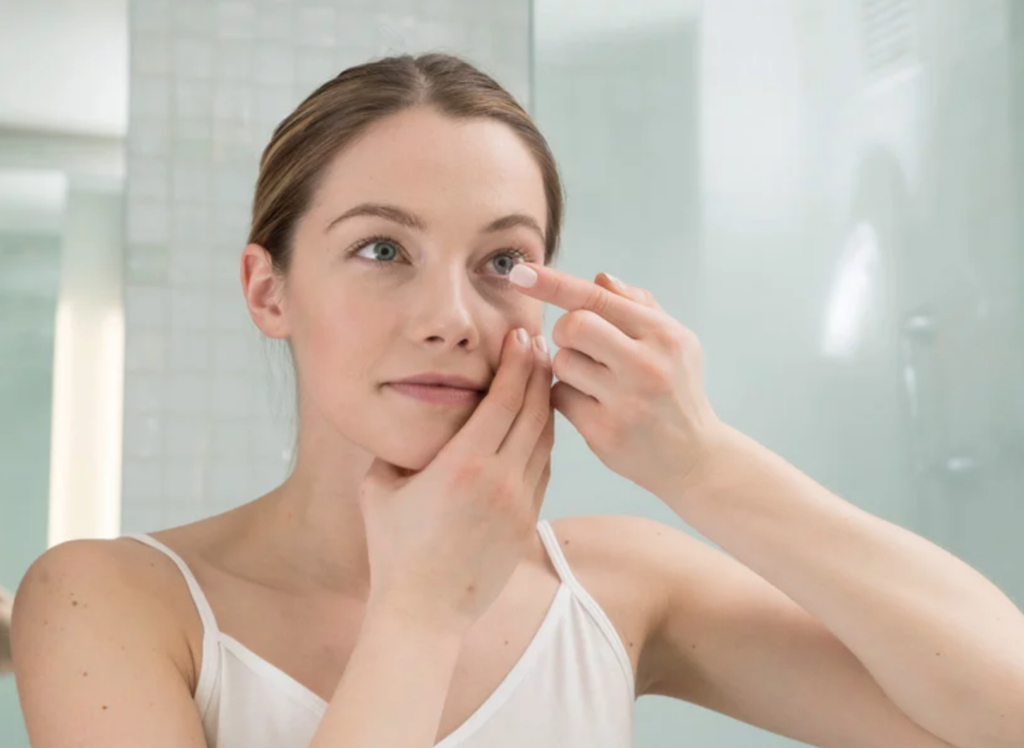 a robotic contact lens that can move to the users command has been made into reality by a team of research scientists at the university of california san diego. the project started through the exploration of how soft robotics can work in collaboration with human beings. the team harnessed the electric signals that naturally occur from the tiny movement made by a human eyeball. this means that by using eyes alone, the contact lens would be able to zoom in if the user blinks twice.

7 – ford’s foldable robot could soon be delivering your packages 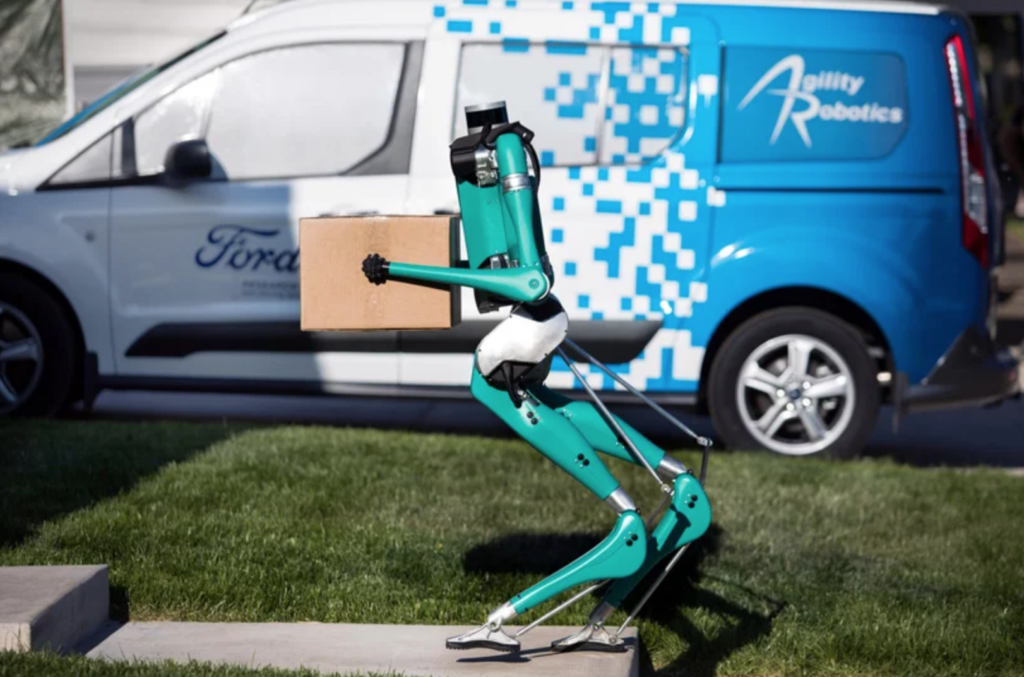 car manufacturer ford has developed a robot capable of carrying packages to the customer’s front door. designed to unfold from the back of a self-driving delivery van, ‘digit’ is a two-legged humanoid that can handle lightweight shipments of up to 40 pounds. it can handle this whilst travelling on pavements, climbing up stairs, and avoiding obstacles along the way. the robot can even walk through uneven terrain and react to being knocked over without losing its balance. 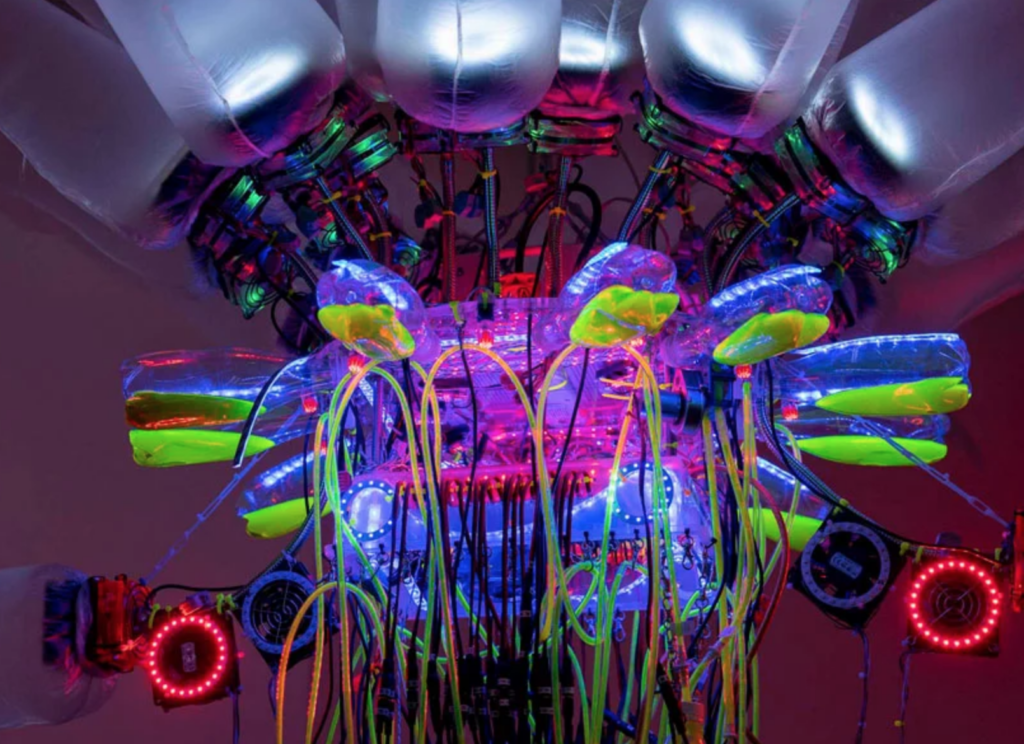 taiwanese artist shih chieh huang created robotic sculptures from unlikely objects, such as garbage bags, plastic bottles and computer fans. suspended from the ceiling, his motorized creations inflate and deflate as they light up the room in primary hues both futuristic and prehistoric in their presence. for his exhibition, titled ‘incubate’, at the feldman gallery until april 13, huang has created a kinetic sculptural installation of his other worldly pieces. 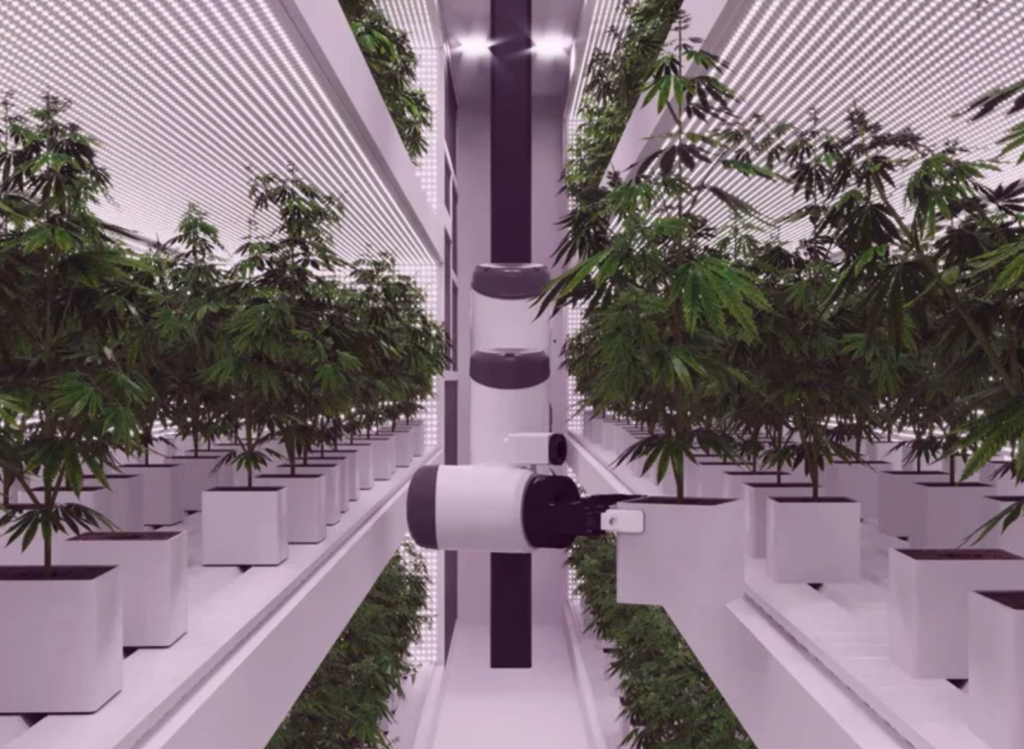 israel-based startup seedo turned heads when it started selling mini fridge-sized cannabis farms for personal use in 2017. with computerized optical systems and climate control, they promised cannabis ‘from seed to flower’ under controlled conditions in the comfort of your own home. now, seedo has announced what it calls the ‘world’s first automated cannabis farm‘. it plans to build a fully automated, commercial-scale cannabis farm using technology that can ensure consistent ‘pharmaceutical-grade’ buds year-round.

10 – FoldiMate, a fully-functional machine that folds your clothes 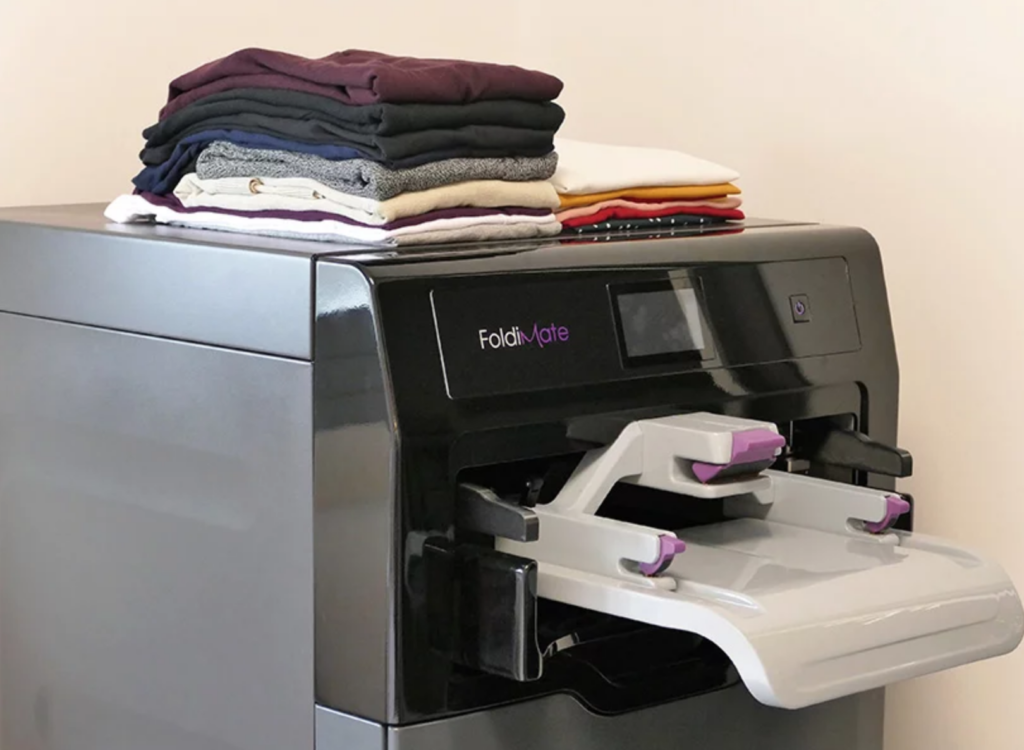 in 2018, FoldiMate teased its home-helping machine — one that can take an entire laundry load and fold it in a few minutes. in 2019, our lazy dreams cam true as FoldiMate was seen in las vegas at CES 2019. designed to fit nicely in any room, FoldiMate features ergonomically designed clipping technology that can fold any type of shirt, blouse, or trouser from age 5 to adult size XXL. its fast folding abilities allows you to feed your items continuously while it simultaneously folds them.

Senate Passes Infrastructure Bill With Some GOP Support. Don’t Get Too Excited.