house in the landscape by russian firm niko architect is an organic, futuristic residence integrated into an artificial landscape on a village outside moscow. taking into account the limitations of visual contact with the external surroundings, the project sees the construction of a private zone with a landscape, formed terrace, and adjacent body of water. developed from the outside in, the house is interconnected with the exterior space, forming a continuity of mutual flow of the landscape into the building, and the building into the landscape, enhanced by a green roof, on which a garden with woody and herbaceous plants is organzied. 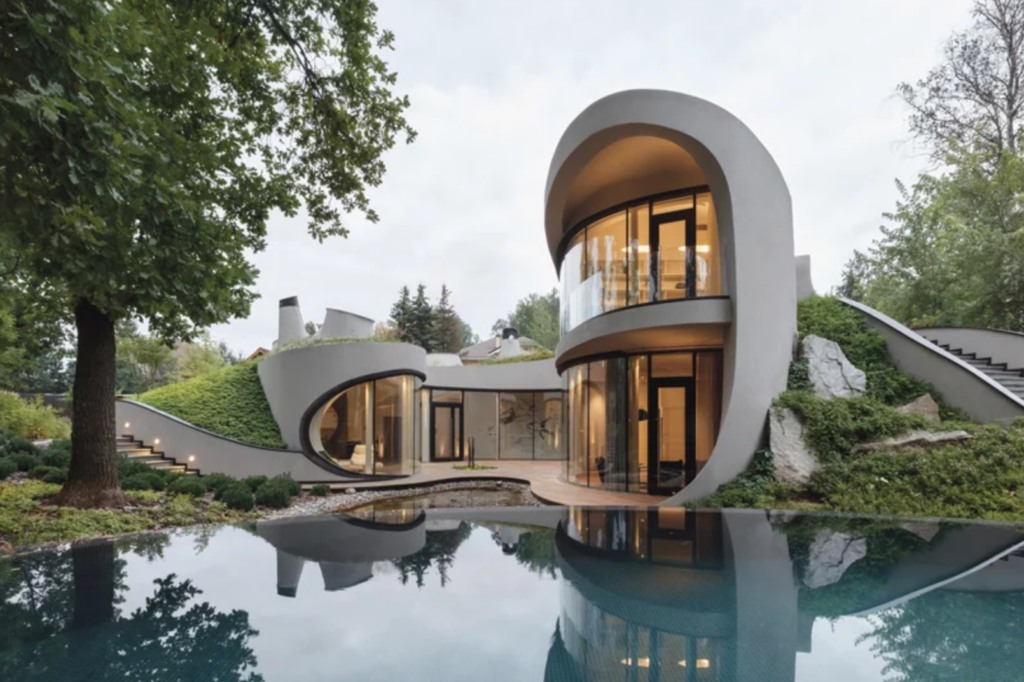 ‘as a result of the inexpressive environment, the fundamental concept base was the integration of the building into an artificially-created landscape and the inextricable connection of architecture with the open courtyard site structure,’ explains niko architect. being ‘an organic architecture with a philosophy of metabolism,’ as the architects describe it, the house is interconnected with its surrounding environment, and has been developed from the outside to the inside. functional zones in the project are simultaneously distinguished to make up a single whole, blurring the boundaries between the external space and the interior.

‘the composition of architecture is developing freely,’ adds the studio. ‘the idea of functional expediency, based on the harmonious “adaptation” of the project to the conditions of its existence and purpose, prevails.’ 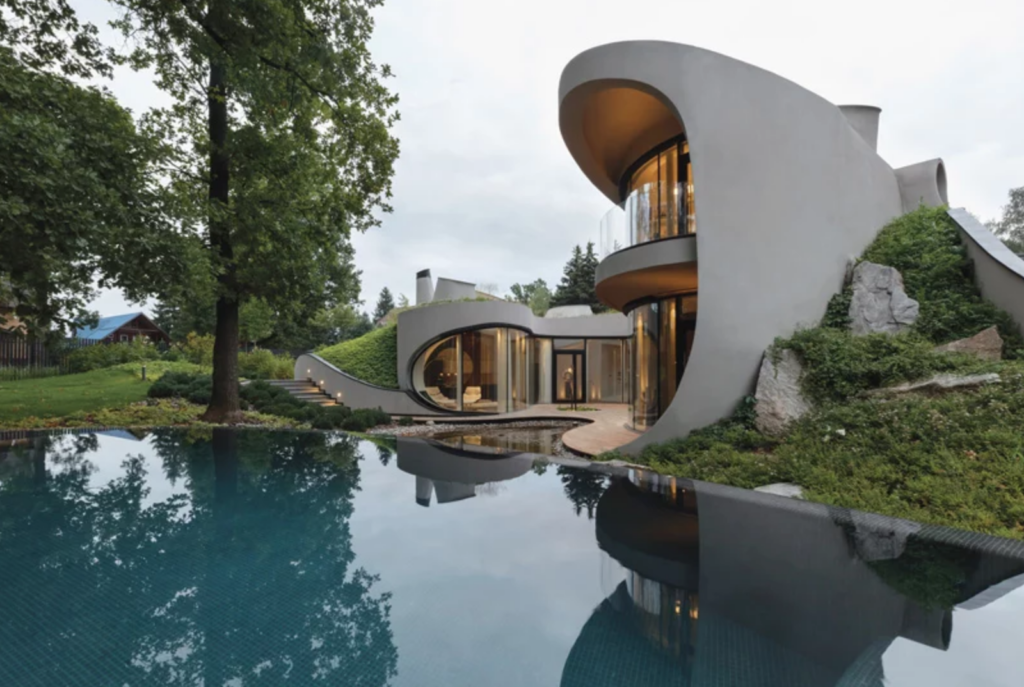 as in a living organism, every element within the project is well balanced and connected to the whole, such as the external space, which is interwoven with the house’s living room, bedroom and other rooms. an additional connection to the outside environment is achieved with a series of circular skylights within the building, which are oriented to the movement of the sun and bring in plenty of natural air and light within the interior. 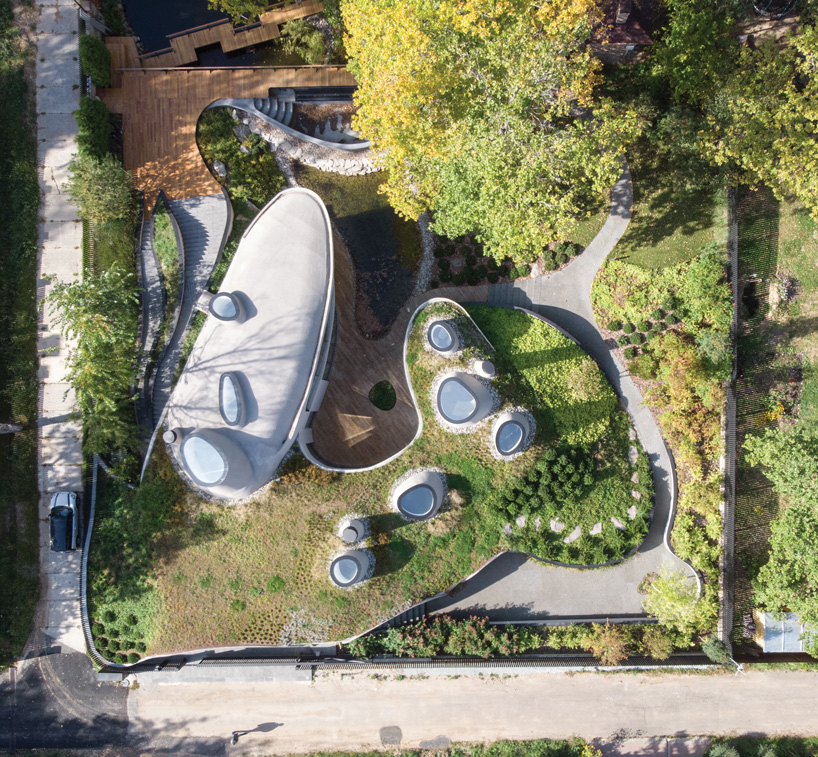 niko architect has organized the interior based on the principle of integrating the ‘home gallery’ into the living space, utilizing the building frame as a backdrop for decor and art, sculptures, decorative elements with hidden japanese themes and symbolic forms. each piece of furniture is interpreted as an artwork, while art objects act also zone elements of residential and non-residential spaces, and are the tracers of movement direction. ‘the panoramic molded windows do not prevent the focus from the site on the “history” that occurs in the house and do not destroy a single architectural field, which includes the exterior-interior and landscape solutions,’ explain the architects. 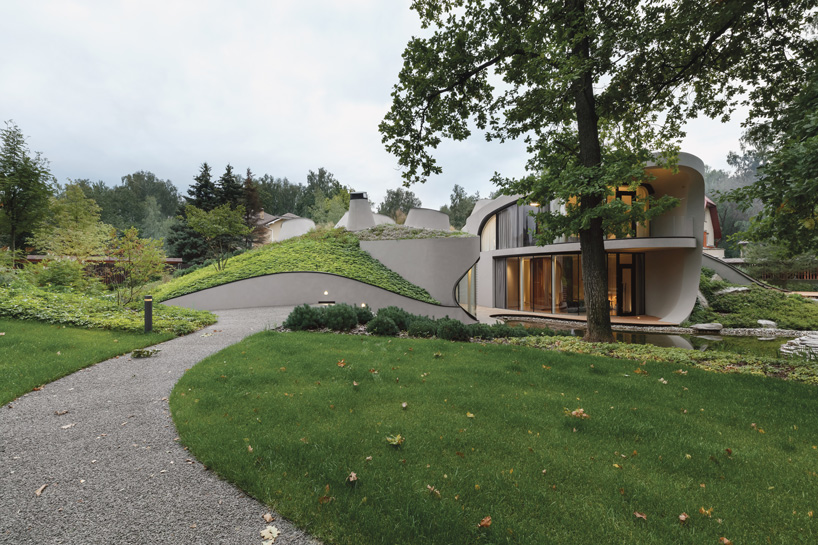 the common living space is divided into three zones: a kitchen-dining room, an open area with a fireplace, and a coffee corner. the kitchen is visually separated from the main living area by a partition with a round hole, which adds to the continuous dialogue between the zones and nods to ‘classical symbolism in japanese culture’, according to the architects. the open area also has a round, almost closed shape and is the compositional core of the interior, symbolizing two balanced halves – yin and yang. lighting is organized not only from a functional point of view, but is also the part of organic architecture, emphasizing the architectural features of the building. 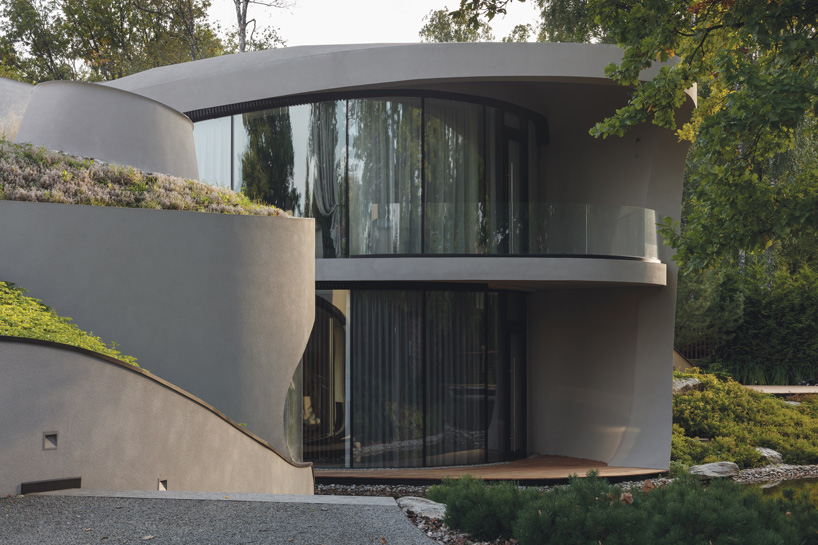 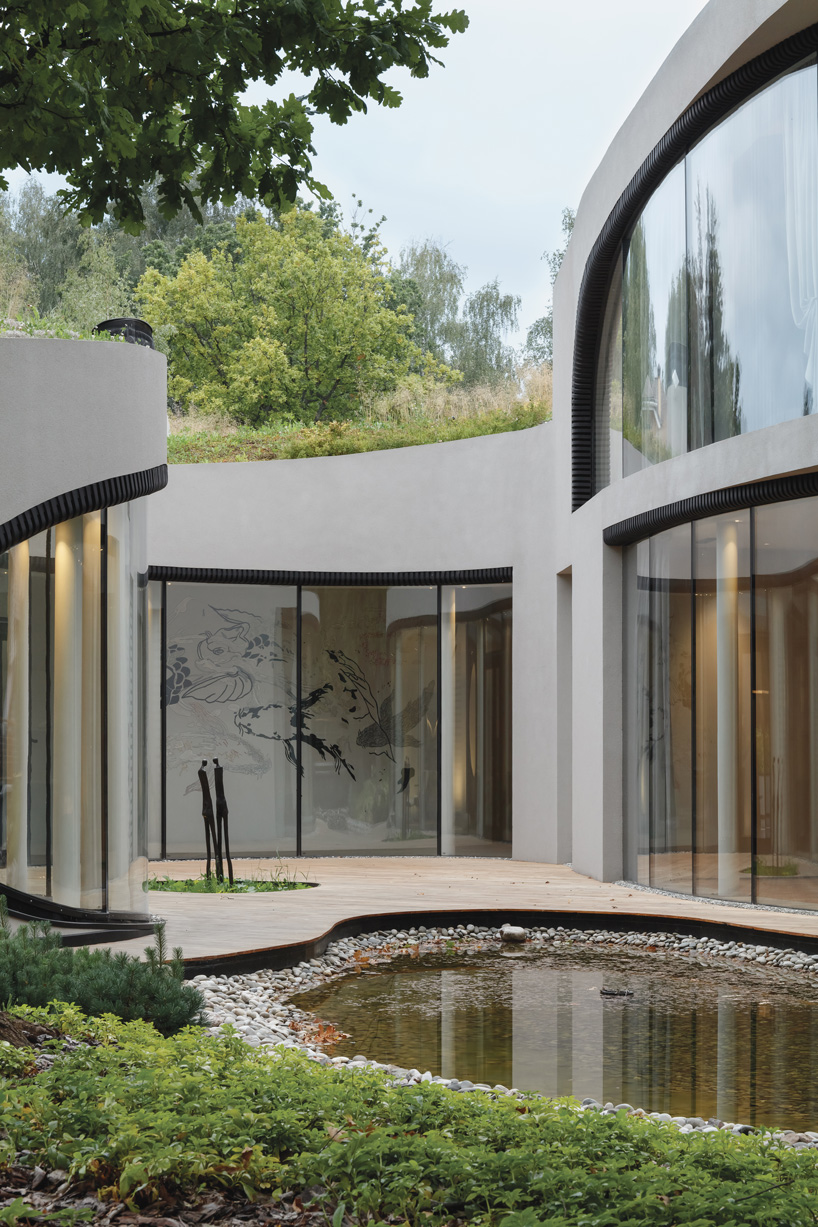 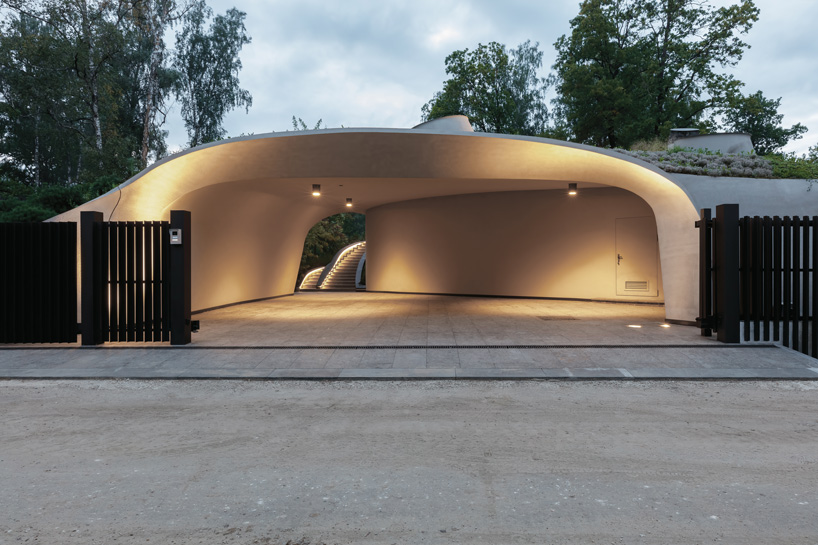 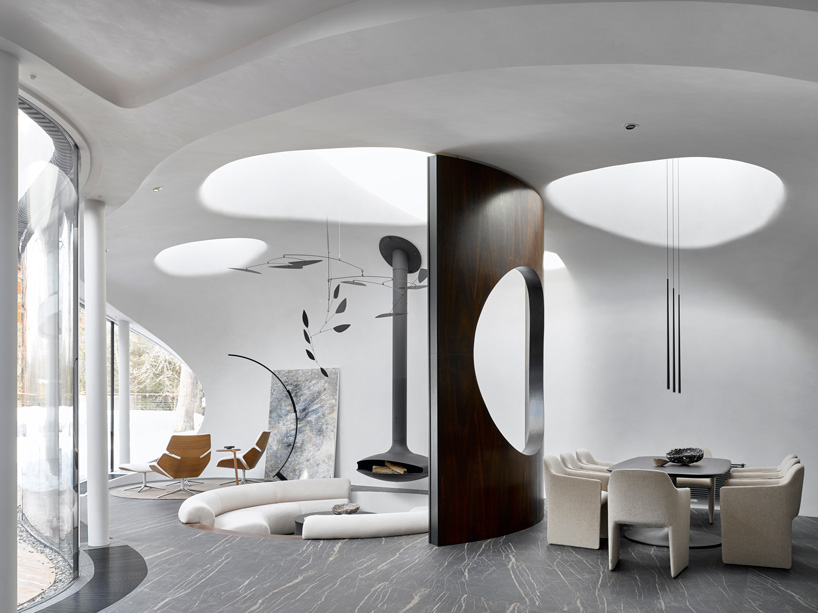 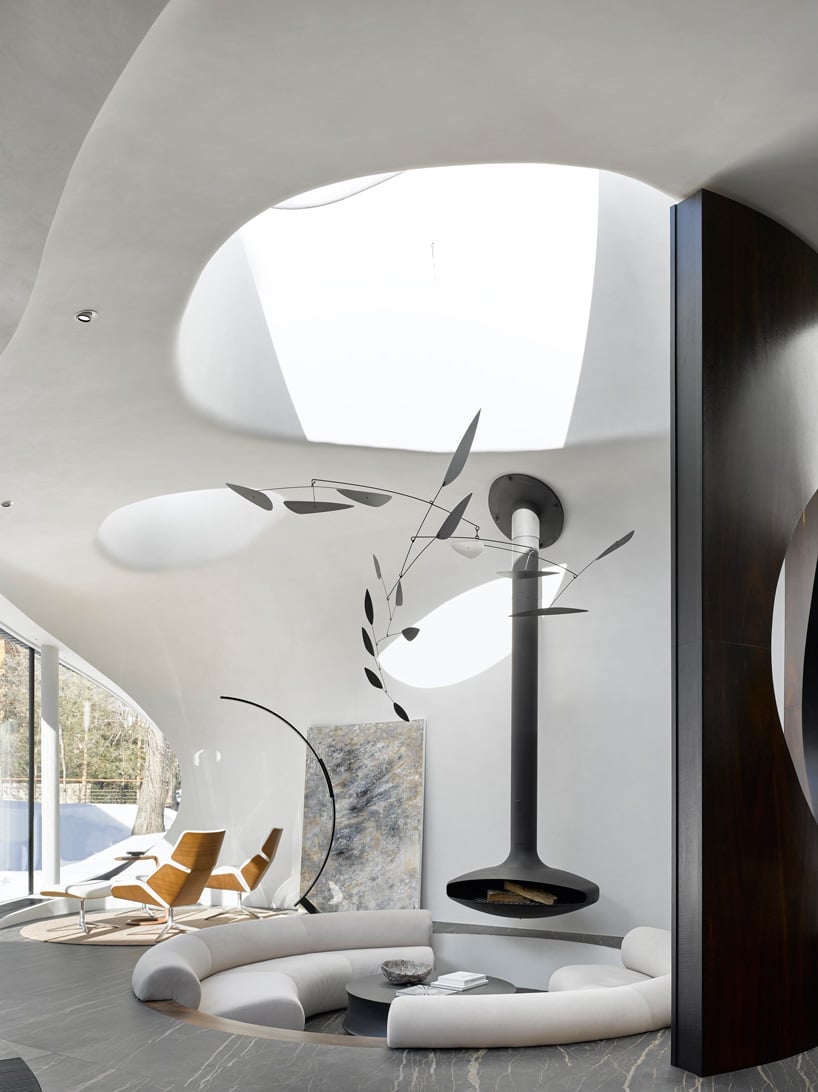 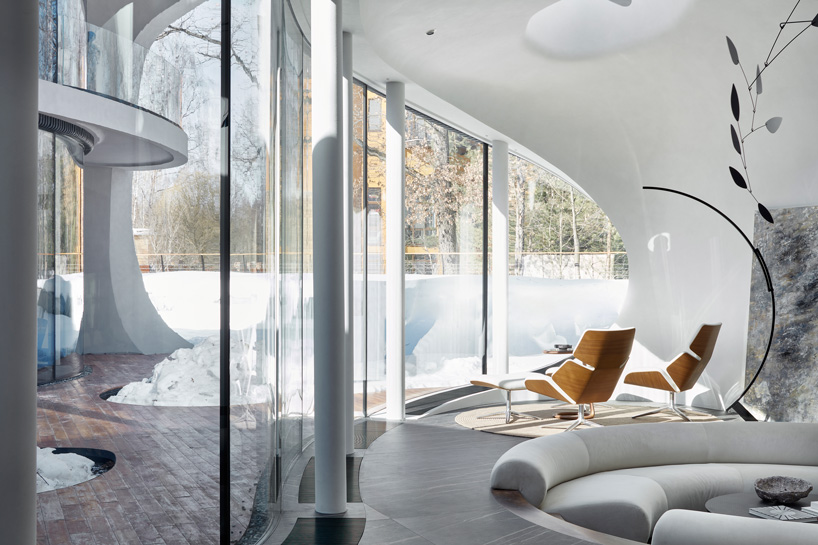 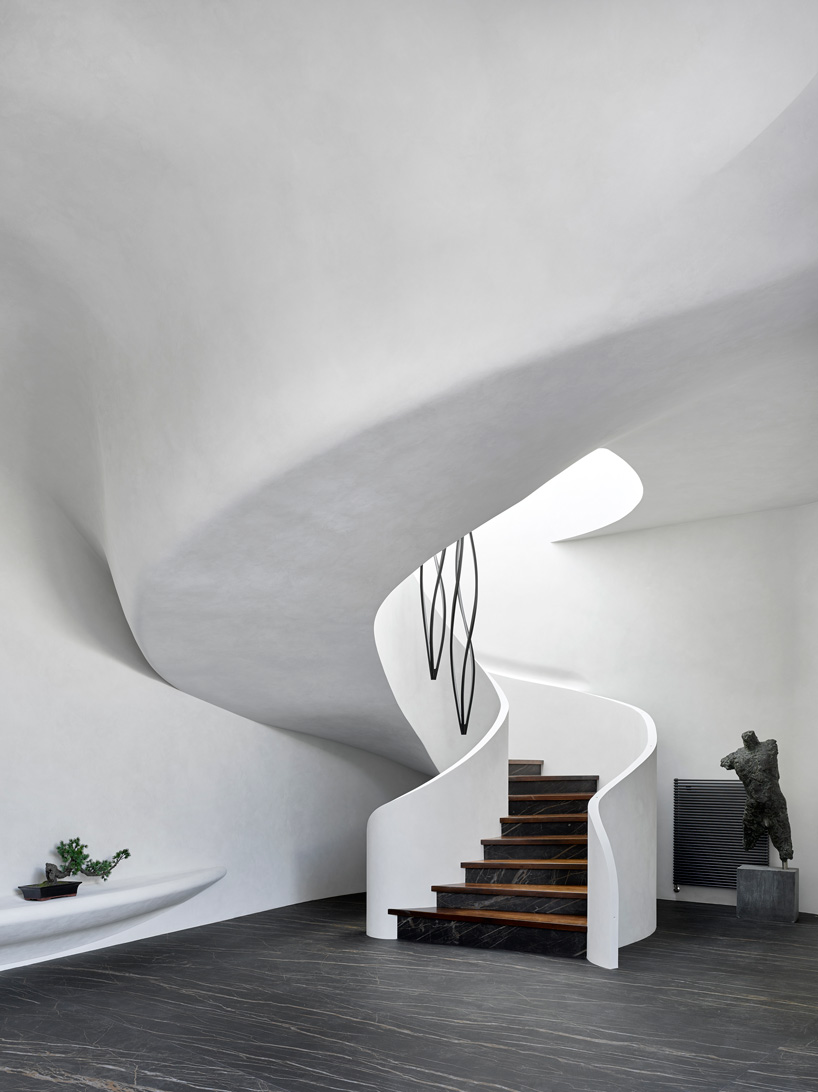 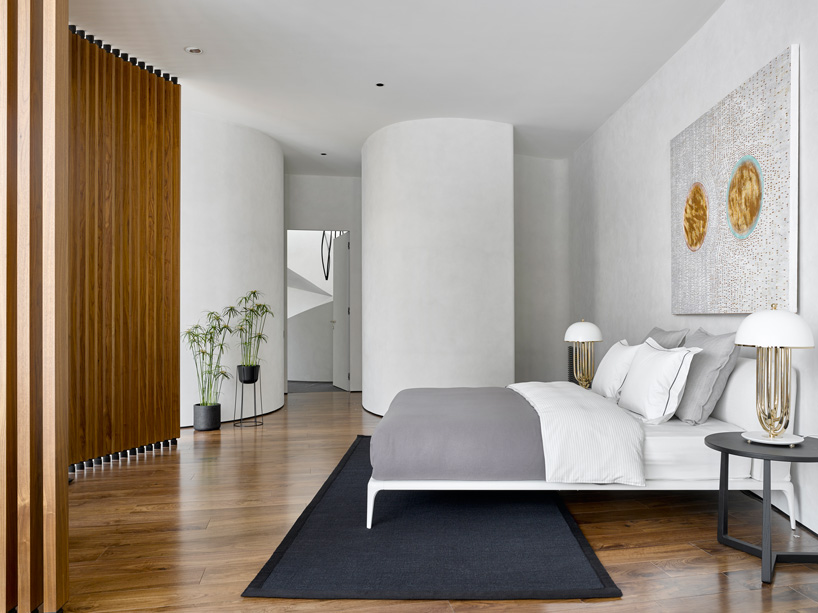