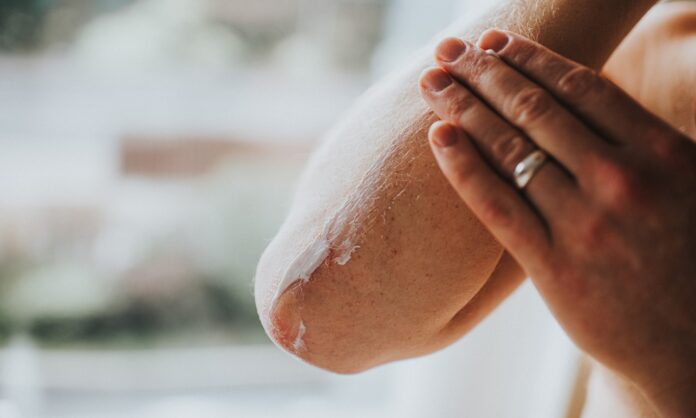 Now that most Americans are eligible to receive the COVID-19 vaccine, the majority of us are aware of the possible side effects we may experience once we’ve been inoculated — the majority of which are pretty standard when compared to flu and other shots, specifically headaches, low grade fever, and pain at injection site. But there’s a less common side effect that can affect your whole body.

A study published in the Journal of the American Academy of Dermatology analyzed results of over 400 people who experienced skin reactions after one or two shots of the mRNA COVID-19 vaccine between December 2020 and February 2021. The most common reactions included large localized symptoms, like hives and rashes (such as measles) known as morbilliform eruptions.

Dr. Esther Freeman spoke with USA Today about these side effects, claiming that they aren’t dangerous. “People can get full-body rashes, and that can be surprising and a little scary, but these patients did extremely well, recovered and were able to go back and get their second dose,” she said. “For people whose rashes started four or more hours after getting the vaccine, zero percent of them went on to get anaphylaxis or any other serious reaction.”

These mild skin reactions are different than more severe allergic reactions, which are a cause for concern, and occur within the first four hours of getting the vaccine. “Even if you have a pretty impressive rash after the vaccine, as long as it didn’t start within four hours of vaccination you should feel comfortable getting the second dose,” said Freeman.

Freeman said that mild skin reactions like urticaria, angioedema, and/or morbilliform eruptions, may not be an allergic reaction, instead, this response could be your immune system’s response to anti-inflammatory agents taken after vaccination.

Severe allergic reactions should be tended to right away by a medical professional, with these symptoms usually treated with epinephrine or an EpiPen. The CDC explains that symptoms could include hives, swelling and wheezing. If a severe allergic reaction occurs during your first round of mRNA vaccine, it might be the right choice to talk to your doctor and ask if you can take a different type of vaccine.

The post This Vaccine Side Effect Can Affect Your Whole Body appeared first on The Fresh Toast.