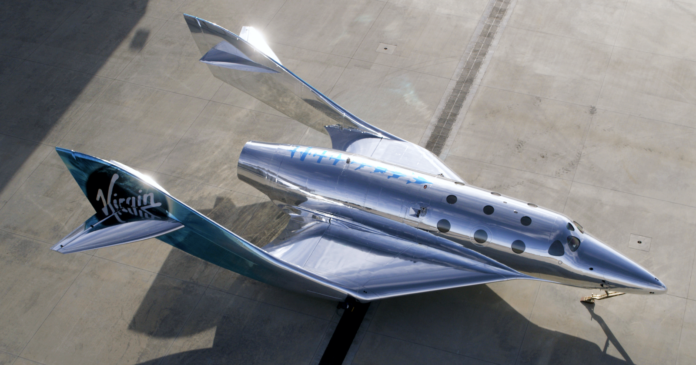 Right about now, pretty much everyone with a passport is longing for the return of unrestricted international travel. Virgin Galactic, the brand hoping to bring commercial space travel to the masses (or at least the ultra-wealthy), is thinking much bigger.

This week, the company unveiled the VSS Imagine, the first member of Virgin Galactic’s new Spaceship III class to join its fleet of prospective commercial spacecraft. The design is based on Virgin Galactic’s existing SpaceShipTwo but sports a sleek, updated look. According to the company, the SpaceShip III will “enable improved performance in terms of maintenance access and flight rate” and “will lay the foundation for the design and manufacture of future vehicles.”

While bearing some similarities to terrestrial aircraft, the VSS Imagine sports a new look that seems ripped out of science fiction. That’s thanks to a new, breakthrough finish that wraps the entirety of its exterior in a “mirror-like material,” letting the SpaceShip III reflect the earth, sky, and stars back as it ascends to the apex of its suborbital flight path. The unique form of this livery design serves a functional purpose as well, as it enhances exterior thermal protection.

“As a SpaceShip III class of vehicle, Imagine is not just beautiful to look at, but represents Virgin Galactic’s growing fleet of spaceships,” Virgin founder Richard Branson said in a statement accompanying the announcement. “Our hope is for all those who travel to space to return with fresh perspectives and new ideas that will bring positive change to our planet.”

The unveiling of the Imagine comes after a period of delays and setbacks for Virgin Galactic, ranging from a fatal 2014 test crash to technological snags and pandemic-induced logistical challenges. Regardless, the space tourism company remains undeterred. Ground testing on the VSS Imagine will begin shortly, with glide flights planned for a summer 2021 takeoff from Spaceport America, the $200 million-plus New Mexico facility (supported largely by state funds) that’s served as Virgin Galactic’s base of operations since 2019.

Simultaneously, Virgin Galactic hopes to make further progress on the manufacturing of VSS Inspire, the second SpaceShip III slated to join the fleet. Ramping up SpaceShip III production will play a key role in hitting the company’s longer-term target of launching 400 space flights per year, per spaceport.

So, if you’ve been scrimping and saving to afford a six-figure seat on a Virgin Galactic flight, the reality of the Imagine suggests your dream of space travel is (at least theoretically) one step closer to coming true. And when you finally manage to get on board, this shiny new spaceship ensures you’ll see the stars in style.