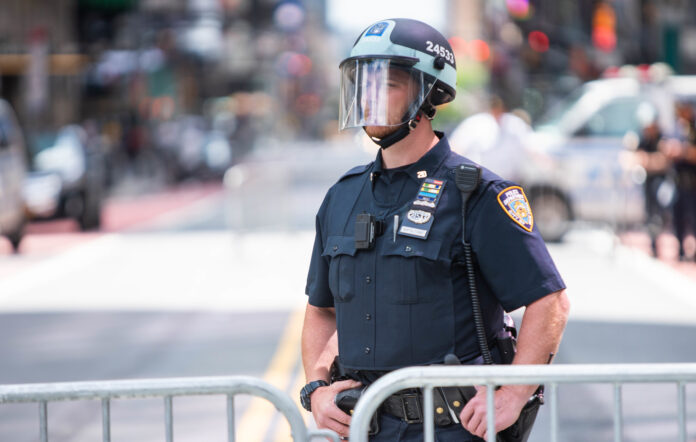 A jury’s conviction of former Minneapolis officer Derek Chauvin in the death of George Floyd is a historic moment, in large part because it’s an anomaly. Officers who kill civilians are rarely prosecuted, let alone convicted — many aren’t even disciplined by their departments.

To understand how police impunity works, it’s worth looking at another case, that of Kawaski Trawick.

Two years ago, Trawick was alone in his apartment in the Bronx when two New York City Police Department officers arrived in response to 911 calls about Trawick walking through the building with a serrated bread knife and a stick. Trawick, who had a history of mental health and drug issues, had locked himself out of his apartment but had gotten back in after firefighters pried open the door. When the police officers arrived minutes later, they pushed the door ajar and found Trawick, a personal trainer and dancer, standing near his stove, holding the knife and stick.

“Why are you in my home?” Trawick asked. Less than two minutes later, he lay dying on the floor. A few months ago, I examined what happened in those 112 seconds. Video from a body-worn camera shows one of the officers — Black and more experienced — repeatedly trying to stop his white, less experienced partner from using force.

“We ain’t gonna tase him,” Officer Herbert Davis told Officer Brendan Thompson, as Trawick stood about seven feet from them. Thompson fired his Taser anyway, which (as can happen) enraged Trawick, who ran toward the officers. Davis again tried to stop his partner, this time from shooting his gun. He briefly pushed Thompson’s gun down, saying, “No, no — don’t, don’t, don’t, don’t, don’t.”

Thompson fired three times, paused for a moment, and then fired a final shot. Trawick died almost instantly. You can see and hear it all for yourself, in a video we made using surveillance and body-worn camera footage. (Davis and Thompson both declined requests for comment.)

Last Wednesday marked two years since the shooting, so I checked in with the NYPD about it. The department had said late last year that it had finally finished its internal investigation and that the police commissioner — who has complete discretion over discipline, as many chiefs around the country do — would soon be deciding what to do.

Last week, the NYPD told me that Commissioner Dermot Shea had indeed ruled on the case. The officers were completely cleared. “There was no discipline as no wrongdoing was found,” the department said.

Here is the NYPD’s full statement. It noted that there was also a “tactical review” to determine “what, if anything, could have been done differently.”

Experts I spoke with pointed to a litany of poor decisions and tactics by the officers.

The officers could have tried to make a connection with Trawick, as the NYPD trains its officers to do, and at least answered his repeated questions about why they were there. They could have waited for help and “just closed the door,” as one former NYPD detective told me, since department policy is to “isolate and contain” people in crisis. They could have decided to not use force, as other officers did when they had encountered Trawick in a similar situation weeks before.

Yet as perplexing as the NYPD’s conclusion may seem, it is also the logical culmination of a series of decisions that have again and again narrowed the avenues for accountability.

The rare occasions in which officers have faced even the possibility of significant punishment have usually come after the public has seen what happened, for example, after a bystander filmed Chauvin’s knee on Floyd’s neck. Trawick’s killing happened out of the public eye. And the NYPD worked to keep it that way.

For a year and a half, it refused to release body-worn camera footage, arguing in response to a public records request and lawsuit that doing so would “interfere” with the department’s internal investigation and would be an “unwarranted invasion of personal privacy.”

But the NYPD did offer its perspective about what happened. “It appears to be justified,” one of the NYPD’s top officials told reporters the day after the shooting.

The police’s perspective shaped the early coverage. Citing “law enforcement sources,” the New York Post reported that a “musclebound man” who was “nicknamed ‘Chaos’” had been shot “when he charged at cops twice with a stick and a knife.” (Trawick was about 5 feet, 5 inches tall, and his family told me they’ve never heard that nickname. The video shows he ran at the officers once, after he was hit by a Taser.)

The NYPD eventually decided to release footage, after the Bronx District Attorney’s Office published it as part of a report last November that laid out its decision not to pursue criminal charges against the officers. The DA’s decision, too, was no surprise: Local prosecutors, who work closely with the police, are particularly hesitant to indict officers.

The DA’s report had troubling revelations buried inside it. While the report’s highlighted timeline didn’t mention it, the report revealed more than two dozen pages in that Davis had tried to stop his partner from shooting Trawick. It also disclosed that other officers had previously decided there was no need to use force when they answered remarkably similar calls involving Trawick. On page 36, the report cited those interactions as “examples of disparate outcomes that deserve mention.”

The DA’s report did not contain the full, unedited body-worn camera footage, and the NYPD initially continued to fight a lawsuit demanding it.

The day before a December hearing in the case, the NYPD sent the footage to the complainants, New York Lawyers for the Public Interest, because, after 20 months, the department’s internal review was complete. That footage, which the law firm shared with me, showed that as officers converged on the scene where Trawick lay lifeless, two of them told a sergeant that “nobody” had been hurt. “Just a perp.”

Shortly after ProPublica published a story about that, a lawyer working on the case for New York Lawyers for the Public Interest got a phone call from the city agency that investigates police misconduct against civilians. An investigator at the Civilian Complaint Review Board had a favor to ask: Could the lawyer please share the newly released footage with him? The investigator explained that the NYPD wouldn’t provide footage to the CCRB.

“I was shocked to get that call,” said the lawyer, Benjamin Reed, of Milbank LLP. “It’s disturbing that they had to come to us, after we had to fight with the NYPD for a year to get it. It’s just backwards. It’s obvious that they can’t properly oversee the NYPD if they can’t get footage.”

That is part of a long pattern of the NYPD obstructing the work of the overmatched agencies that are supposed to oversee it. In shootings and other serious incidents such as the Trawick case, the NYPD routinely refuses to give the CCRB footage and other records until the department’s internal investigation is over, which can take a year or more.

The delays can render the civilian board’s investigations effectively moot. The CCRB told me that its investigation into Trawick’s killing is still open, and that it has now received footage from the NYPD. But the police commissioner, who gets final say on punishment, has already decided there was no wrongdoing.

When I reported on the Trawick case last fall, one of the people I spoke with was Jonathan Smith, who worked on civil rights litigation at the Justice Department during the Obama administration and led the agency’s most significant investigations into police abuse. “This case is a lesson in how you don’t do one of these encounters,” he said, after reviewing the footage. “They should teach it in the academy.”

I reached back out to Smith to share the NYPD’s conclusion that there was no wrongdoing. “For them to find nothing wrong there,” he said, “it’s just stunning.”

Smith said it reminded him of another young man’s death he recently investigated for the city of Aurora, Colorado. Twenty-three-year-old Elijah McClain died after police officers twice put him in a chokehold and paramedics injected him with ketamine. The officers had stopped him after a 911 caller said McClain, who was walking down the street, “looked sketchy.”

It’s all part of a pattern, Smith said: “Every department I’ve seen where there’s been a pattern of misconduct, you’ve also had a broken accountability system.”

There was one other call I made after learning of the NYPD’s decision. It was to Kawaski Trawick’s mother, Ellen Trawick. She had not heard about the department’s ruling.

“I just don’t understand it,” she said. “He hadn’t committed a crime. He hadn’t harmed anyone. They came into his own home and took his life for no reason. For them not to see that’s wrong, that’s just heartbreaking.”

Trawick and her family have filed a lawsuit against the city, the NYPD and the officers.

Lessons From Bessemer: What Amazon’s Union Defeat Means for the American Labor Movement

But a suit can only do so much. If there’s a settlement or a judgment, it’s likely the city and its taxpayers, not the officers or the NYPD, that will pay.

In response to the family’s action, city lawyers have placed the blame for Kawaski Trawick’s death squarely on Kawaski Trawick. As they put it in a filing last fall: “Plaintiff(s)’ culpable conduct caused or contributed, in whole or in part, to his/her/their injuries and or damages.”

I asked Ellen Trawick what outcome she is hoping for in the suit. “I want the officers held accountable for their actions,” she said. “They took Kawaski’s life. But from what you’re saying there’s nothing going to be done about it.”

Update, April 20, 2021: This story has been updated to reflect a jury’s conviction of Derek Chauvin.