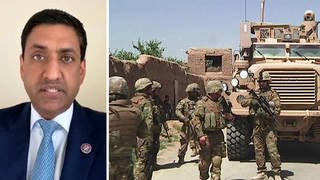 Democratic Congressmember Ro Khanna says President Joe Biden’s plan to pull U.S. troops out of Afghanistan is a “courageous” decision. “I’m very glad that we have a president who has finally recognized that this is not a militarily winnable war,” says Khanna. President Biden announced this week he plans to withdraw U.S. troops from Afghanistan by September 11, the 20th anniversary of the 9/11 attacks, bringing the longest war in U.S. history to a close. Khanna says he is open to a U.N. peacekeeping force, as some have suggested, to ensure Afghanistan does not fall into deeper chaos once American troops leave. “Withdrawing militarily does not mean that we can stop engaging,” says Khanna.