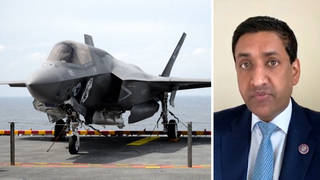 Congressmember Ro Khanna of California says hundreds of billions of dollars in annual defense spending could be better used on diplomacy, humanitarian aid, public health and other initiatives. He’s one of 50 House Democrats who signed a letter to President Joe Biden in March urging a “significantly reduced” Pentagon budget, which has grown to over $700 billion. “The Pentagon increases make no sense,” says Khanna. “If you’re ending the forever war in Afghanistan … then why are we increasing, at the same time, the defense budget?” Khanna also discusses the Saudi-led, U.S.-backed war in Yemen, a major U.S. arms deal with the United Arab Emirates and more.