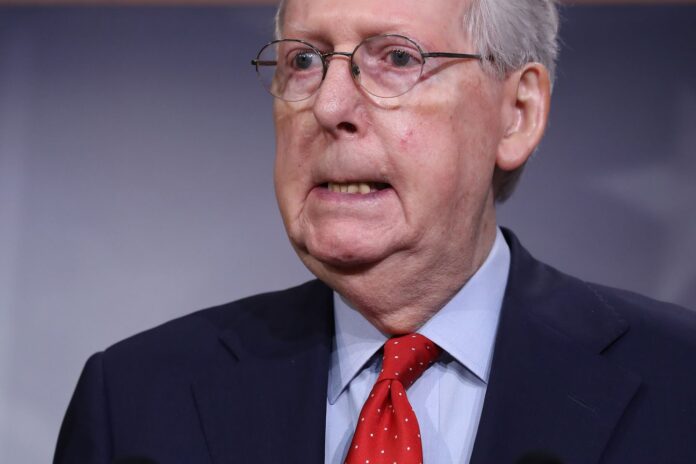 Mitch McConnell doesn’t seem to be adjusting well to the new limits of his power, following his ouster from the majority leader seat last November. A once nigh-omnipotent power broker, McConnell has now found his influence diminished to the point that he’s yelling strange things at stranger targets. He spent a chunk of last week unspooling some doozies directed at corporate America, which has long been a close ally of the Republican Party.

The trouble began in Georgia, a state whose GOP officials were still reeling from the triple disaster (for them) of losing the presidential election along with two senate seats. That debacle handed full control of Congress and the White House to President Biden and the Democrats.

Georgia Republicans, along with GOP officials in several other states, responded by passing a slate of laws aimed at attacking Black people’s ability to vote. Backlash from the rest of the country was swift, but it got real for Mitch and the GOP when big business stepped in and started laying about with a rhetorical baseball bat.

Granted, these corporate complaints about Georgia’s and the other states’ vicious voting restrictions registered about a “2” on the Serious-o-Meter. Even in what passes for high dudgeon, corporations are what they are, and any statement is going to pass through the leavening hands of marketing and the legal department before seeing the light of day.

Also, and to be duly noted, is this: “According to a report by nonprofit consumer advocacy organization Public Citizen, since 2015, corporations have contributed $50 million to state legislators who support bills that appear to be suppressive,” reports Jameelah Nasheed for Teen Vogue. “Of this amount, $22 million was donated during the 2020 election cycle. The report also says that 81 of the Fortune 100’s companies have given a combined total of $7.7 million to these lawmakers.”

For this largesse, McConnell has served as perhaps the best friend corporate America has had in politics for generations. In fact, McConnell has labored mightily to get corporations and their money as far into politics as can be managed. He was the plaintiff in McConnell v. FEC, the Supreme Court case attacking the McCain-Feingold campaign reforms. McConnell was a champion for Citizens United v. FEC, the case that all but legalized political bribery via dark money.

Corporate America is quitting the GOP, right, OK, sure thing… but then Major League Baseball (MLB) swooped down from a clear blue sky and snatched the All-Star Game out of Atlanta. Suddenly this rift had become much more real, motivating Mitch to swing into action and offer this salvo:

My warning, if you will, to corporate America is to stay out of politics. It’s not what you’re designed for. And don’t be intimidated by the left into taking up causes that put you right in the middle of one of America’s greatest political debates. So, that’s my admonition, and Delta, Coca-Cola and the other companies that basically responded to this partisan appeal are doing the same thing.

You know, Republicans drink Coca-Cola, too, and we fly, and we like baseball. This is a pretty competitive political environment in America, as I just pointed out, a 50-50 senate. If I were running a major corporation, I’d stay out of politics.

I’m not talking about political contributions. Most of them contribute to both sides, they have political action committees, that’s fine, it’s legal, appropriate, I support that. I’m talking about taking a position on a highly incendiary issue like this, and punishing a community or a state because you don’t like a particular law they passed. I just think it’s stupid.

A day later, McConnell was moonwalking those comments back at flank speed. “I didn’t say that very artfully yesterday,” he said about calling corporate America “stupid” while telling them to keep contributing. “My principal complaint is, they didn’t read the darn bill.” Did you?

A week later, and the scab got ripped off again. Republican Chuck Grassley, the Senate Judiciary Committee’s ranking member, popped his cork over the MLB decision to move the game. “When partisans and companies collude to ruin the livelihoods of their opponents, there’s a term for that: it’s economic terrorism,” Grassley barked. He went on to claim that “cancel culture” was responsible for this, and because of it, Georgia would lose “100 million jobs.”

I don’t know, man. They seem spooked to me, and perhaps for good reason. “Conservative lawmakers concerned by the growing list of major corporations taking progressive stances on hot-button political issues should expect more of the same for the foreseeable future,” reports CNN. “So says Lisa Osborne Ross, who next month will become the first Black person to serve as chief executive officer for the US division of Edelman, one of the world’s largest and most influential public relations firms.”

There are a number of fascinating reasons for this. The Cook Political Report did a comprehensive analysis of this seeming rift between the GOP and corporate America and came up with a core motivator: “geographic polarization.” A majority of the population and money in the country has flowed into solid Democratic districts on both coasts, as well as in and around major cities within the core of the continent.

This speaks to more than policy or demographics. For the corporations, it’s much simpler: They go where the money is, and at present, the money lives in places where potential customers believe in fair voting laws, among a broad array of other progressive positions. If the corporations do not respond to that, they risk losing the largest markets the country has to offer.

Corporations are being forced by their customer base to get more active in the kind of politics they’ve never been involved with before.

The moment is reminiscent of the events described in Ronald Brownstein’s new book, Rock Me on the Water: 1974, The Year Los Angeles Transformed Music, Movies, Television and Politics. The book describes a torpid entertainment media stuck in a “Hee-Haw!” content rut because their most loyal consumers were rural conservatives. In 1974, networks like CBS chose to push the boundaries and reach for more sophisticated urban viewers with edgier programming. Thus, game-changing programming like “All in the Family” was born, and the television experience changed forever.

This could be said to be one of the seedcorn moments of what we now call the “culture war.” The rural conservatives lost that round, and it has been back and forth over the last half century. Today, with geographic polarization placing a majority of the country’s money in places dominated by progressive ideals, some corporations are being forced by their customer base to get more active in the kind of politics they’ve never been involved with before. If the GOP loses that money spigot because they continue tacking to the hard right, they will be hard pressed to make up for it elsewhere.

Is there any real fire behind this smoke, however? Is there any scenario that could ever bring about a schism between corporate America and the Republican Party? After the attack on the Capitol by Trump supporters, a number of major corporations vowed to curtail political donations to anyone even vaguely involved in that calamity. By the end of March, however, it was business as usual again. More recently, Coca-Cola and Delta skulked back from their tepid support for voting rights.

No one can really say for sure what all this means at this juncture. The very idea that major corporations would break with the GOP in even a symbolic way would have been laughed out of the room and down the block a year ago… yet here we stand, with more than a few of those corporations furrowing Republican brows at a moment when that party is already deeply in disarray. If you think more corporations should follow suit, maybe you should let them know. They are, after all, “people.”

A mainstream outlet accepted my pitch on what media refuses to...