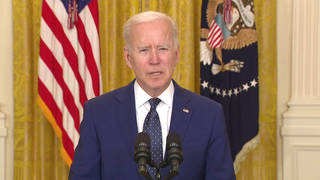 The United States has imposed new sanctions on Russia and expelled 10 Russian diplomats after the Biden administration accused Moscow of being involved in major cyberattacks. The Treasury Department claimed Russia interfered in the 2020 election and was behind the SolarWinds hack, which compromised the computer systems of nine U.S. government agencies and scores of private companies. The sanctions target 32 Russian entities and individuals and bar U.S. banks from purchasing Russian government debt. Russia vowed to retaliate against the new sanctions and accused the Biden administration of degrading bilateral relations. “The most dangerous aspect of this is it introduces something new into international relations, because despite the way that it’s being described, this was not an attack on the U.S.,” says Anatol Lieven, senior fellow for Russia and Europe at the Quincy Institute for Responsible Statecraft. “Never previously have sanctions been imposed in response to an espionage case, for the very good reason that every country, including the United States, engages in espionage.”