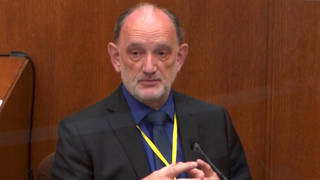 In the trial of former Minneapolis police officer Derek Chauvin, a key witness for the defense was the former Maryland chief medical examiner, Dr. David Fowler, who contradicted most other expert witnesses in the trial and suggested heart trouble and other issues, not the police restraint, caused George Floyd’s death. The decision by Chauvin’s legal team to rely on Fowler’s testimony shocked many in Maryland, where he is being sued by the family of 19-year-old Anton Black, an African American teenager from Maryland who died in 2018 after he was electrocuted with a Taser, pinned in a prone position and crushed under the weight of three white police officers and a white civilian as he struggled to breathe and lost consciousness. After an autopsy, Dr. Fowler ruled Black’s death an accident, and no one was charged with a crime. The wrongful death lawsuit says Dr. Fowler delayed release of an autopsy report for months and covered up police responsibility for Black’s death. Sonia Kumar, senior staff attorney at the ACLU of Maryland, says there is “a pattern of conduct in Maryland involving police violence against Black people that then are characterized as anything other than homicides.” We also speak with Richard Potter, the founder of the Coalition for Justice for Anton Black and president of the Talbot County branch of the NAACP, who says officials in Anton Black’s case spent months dragging their feet after the teenager’s death. “Nobody was giving the family any information in terms of a cause of death,” he says.