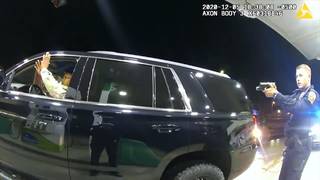 We speak with the lawyer for a lieutenant in the Army Medical Corps who is suing two Virginia police officers who pepper-sprayed him, pushed him to the ground and pointed their guns at him during a traffic stop at a gas station last December. Video of the encounter has gone viral and shows Caron Nazario, who is a Black and Latino man, was wearing his Army uniform during the stop. When Nazario says he’s afraid to get out of his car, one officer responds, “You should be.” Nazario says he drove about a mile to the gas station after he noticed a police car flashing its lights at him — a common practice to avoid pulling over on a dark road. It is shocking that a police officer “felt it appropriate to threaten a man with state-sanctioned murder” for simply asking why he was pulled over, says Jonathan Arthur, Nazario’s attorney. “My client’s looking just to hold these officers accountable under law.”

How Cannabis And CBD Can Help Eliminate The Stigma Around Mental...