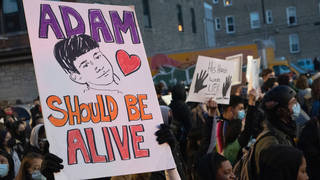 As protests continue in Chicago and nationwide over the police killing of 13-year-old Adam Toledo, we get an update from community activist and independent journalist Mateo Zapata, who says, “People in Chicago are just tired of seeing Black and Brown youth murdered by police.” Released bodycam video showed Adam had his hands up in the air when he was shot by an officer. We also speak with Rutgers professor Lilia Fernández, who studies Latino Chicago history and says police brutality toward this community is “not a new phenomenon” and goes back many decades. “Adam Toledo would not be dead today if he were white, if he were from an affluent family or if he lived in a predominantly white neighborhood,” Fernández says.