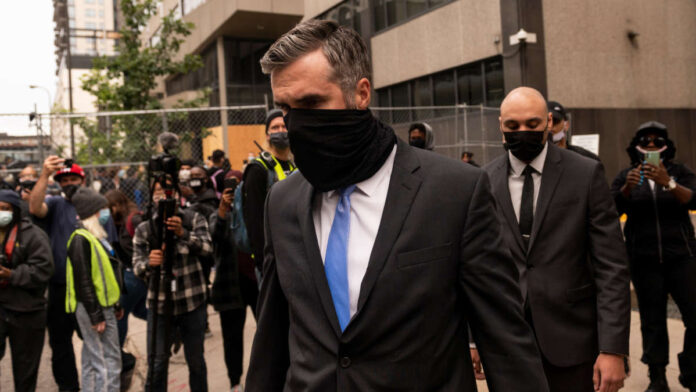 Lane and Kueng had helped to restrain Floyd, and prosecutors say that Thao had held back bystanders while Chauvin was killing Floyd.

Chauvin was also charged with a second count on Friday due to a 2017 incident in which he allegedly injured a handcuffed 14-year-old Black child by striking the boy with a flashlight and kneeling on him for nearly 17 minutes. Chauvin was found guilty of murdering Floyd last month and is in prison awaiting his sentence. The other officers are free on bond, and will face trial in August.

Though advocates acknowledged that Chauvin’s conviction was a relief, many have noted that convictions and charges are not equivalent to justice.

As activist and abolitionist Mariame Kaba wrote in We Do This ‘Til We Free Us, “[I]ndictments won’t and can’t end oppressive policing which is rooted in anti-blackness, social control and containment. Policing is derivative of a broader social justice. It’s impossible for non-oppressive policing to exist in a fundamentally oppressive and unjust society.”

When the four officers faced a pretrial hearing in September, Minneapolis-based Reclaim the Block, which advocates for divestment from policing, wrote on Twitter that, “Today, as the cops who killed George Floyd go to a pretrial hearing, our hearts are full of rage and longing for a system that can deliver more justice for George Floyd’s killers than this one can.”

“As an abolitionist group, we resist the temptation to believe that prosecution, and less likely, the conviction and imprisonment of police officers like Derek Chauvin is a path to justice for victims of police violence, as history has continued to prove otherwise,” the group continued.

Following Chauvin’s conviction last month, advocates and activists noted that a truly just system would be one that didn’t murder Floyd to begin with.

“I don’t want this moment to be framed as this system working, because it’s not working,” Rep. Alexandria Ocasio-Cortez (D-New York) said. “Verdicts are not substitutes for policy change.”

Indeed, while the U.S. Justice Department has launched an investigation into Minneapolis police to examine misconduct within the department, an intervention by the federal government within a police department wouldn’t be able to fix a system of policing that’s fundamentally broken.

In fact, treating Chauvin and the Minneapolis police as especially cruel and exceptions to police rule could end up causing further harm, wrote Zhandarka Kurti and Jarrod Shanahan for Truthout. “It was clear by the end of the trial that after the mass upheaval spurred by Floyd’s death, the city of Minneapolis was more than prepared to wash its hands of Derek Chauvin — sacrificing one officer in an attempt to salvage and absolve policing as a whole,” they wrote.