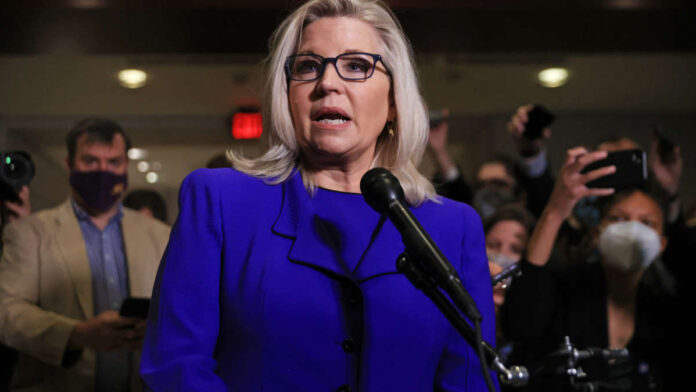 House Republicans voted to remove Rep. Liz Cheney (R-Wyoming) from her leadership position on Wednesday, in a move that cemented the right’s unending fealty to former President Donald Trump.

Cheney had refused to continue perpetuating Trump’s big lie that the election was stolen, which many Republicans viewed as a sort of betrayal of their values — though Cheney herself has been a loyal rank-and-file GOP member over the years, often pushing the worst elements of conservative ideology.

The lawmakers ousted her by a voice vote in a brief closed-door meeting. House Republicans booed Cheney as she made her final speech on Wednesday morning.

In her speech from the House floor on Tuesday night, Cheney condemned her colleagues for being “at war with the Constitution” and “embolden[ing] the liar.” All but one of her fellow Republicans left the chamber during her speech.

Republicans have chosen Rep. Elise Stefanik (R-New York) to replace Cheney. Stefanik had previously branded herself as a moderate, which only got her dismissed by fellow Republicans. In recent months, however, Stefanik has pledged her allegiance to Trump — a move that, clearly, has been a boon to her career.

Cheney’s ousting is largely viewed as the definitive move by the Republican Party to vow total loyalty to Trump and the authoritarian movement he created. They have especially doubled down on that stance in the past months; back in February, despite the fact that Cheney had just voted to impeach Trump, Republicans had voted 145 to 61 to keep her in her leadership position.

Republicans like Sen. Mitt Romney (R-Utah) have come to her defense in saying that she is being ousted for refusing to lie about the election.

Indeed, in her final days as the third highest ranking Republican in the House, Cheney embraced a martyr-like status as moderate Republicans and even Democrats praised her for doing the bare minimum of recognizing that Joe Biden won the election.

But that praise, progressives point out, is misplaced. As Truthout’s Will Pitt points out, Cheney was previously a leader in pushing Islamophobia during former President Barack Obama years and was instrumental in helping to send her party down the path to extremism that it is on now.

“Now that her entire political career is trembling on the verge of extinction, Liz Cheney has recast herself as a sort of Joan of Arc character, a doomed victim of nefarious forces she has vowed to keep fighting,” wrote Pitt. “Train a pack of dogs with violence, ignorance and hunger, and they will turn and tear you to pieces sooner or later. For Cheney, it is sooner, and the ice beckons.”

Even in the op-ed Cheney wrote for The Washington Post last week, she couldn’t help but condemn activists in the movement for Black lives while also criticizing her party for defending the Capitol attack on January 6.

“We Republicans need to stand for genuinely conservative principles,” she wrote. “There is much at stake now, including the ridiculous wokeness of our political rivals,” she said, and then went on to hail former President Ronald Reagan as the gold standard in conservatism.

Cheney is correct in observing that the Republican Party of today has been moving further away from “principles” and more toward a supposed ideology of following Trump and opposing Democrats — no matter what. But that doesn’t mean she deserves praise, as progressives have written.

“To complain about ‘wokeness’ in this moment is more than a right-wing racist dog whistle. It is an air raid siren,” wrote Chauncy DeVega for Salon. Indeed, while Cheney purports to stand up for democracy, she has ignored the fact that her own party is hard at work at the state level trying to steal elections in plain sight. She has chosen instead to save her criticism for the progressives and activists standing up for racial justice.

By contrast, recent moves by the Republican Party — such as pushing the big lie about the election — have led people like Sen. Bernie Sanders (I-Vermont) to brand the GOP an “authoritarian cult.”

“There is one issue, in my view, that is more important than any other issue and impacts every concern that we have, and that is the struggle to maintain democracy in the United States of America,” said Sanders in a video posted to Twitter on Wednesday. “Sadly, it is not a secret that over the last number of years, the Republican Party has ceased to be a conservative party, and has rather become an authoritarian cult which propagates big lies and conspiracy theories.”