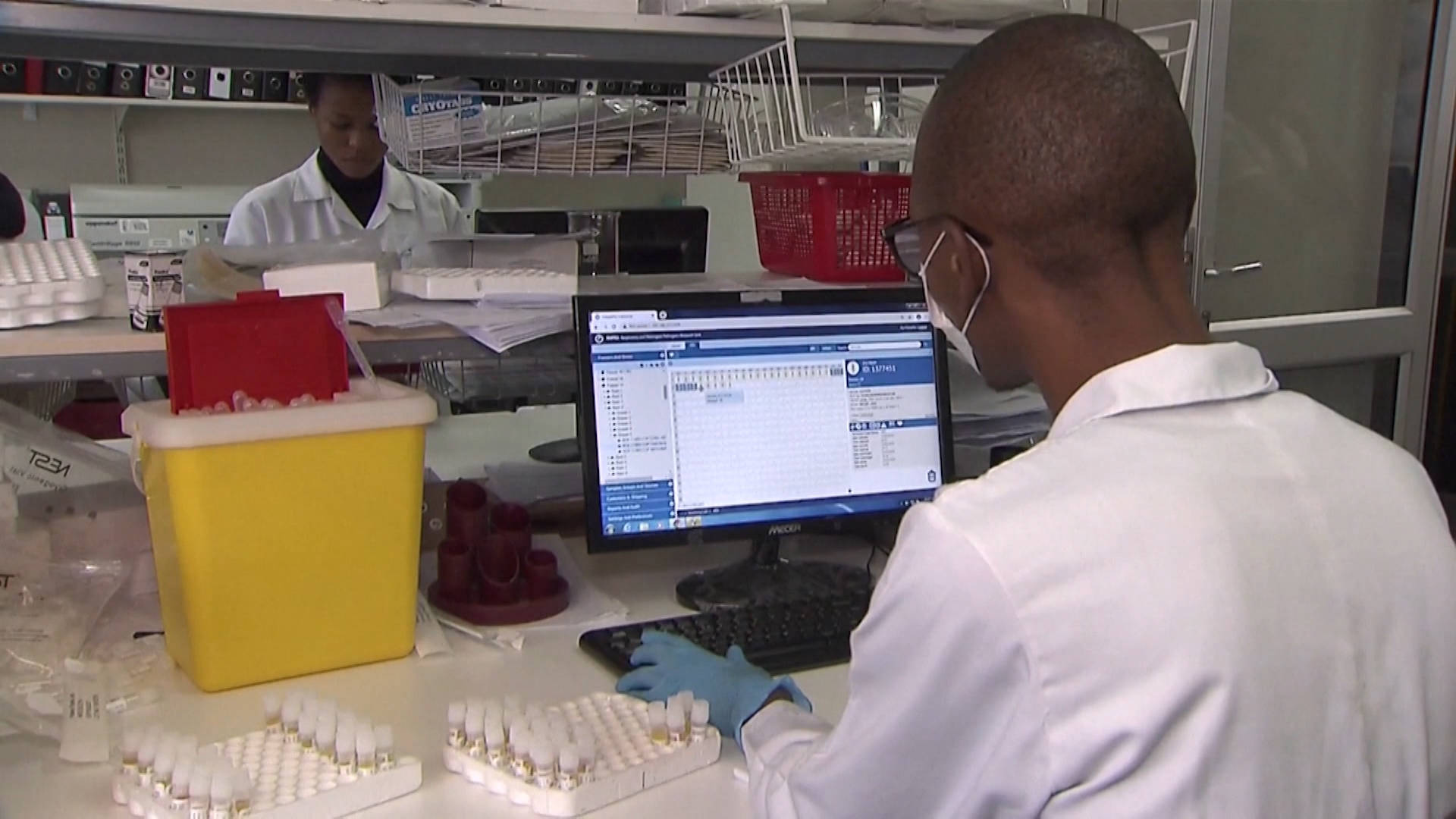 AMY GOODMAN: This is Democracy Now!, Democracynow.org, the War and Peace Report. I’m Amy Goodman. Scientists across the globe are scrambling to learn more about the newly discovered Omicron virus variant, which was first identified by scientists in South Africa last week. Preliminary evidence shows the new variant is highly transmissible but it’s too early to tell if it will result in more severe cases. Some doctors in South Africa say they are seeing mild cases so far.

In a new report the World Health Organization said, “The likelihood of potential further spread of omicron at the global level is high. Depending on these characteristics, there could be future surges of Covid-19, which could have severe consequences.” The WHO has also urged nations to keep their borders open instead of instituting new travel bans. But some countries, including Israel, Japan and Morocco have already imposed bans on foreign travelers. The United States is blocking many travelers from eight countries in Africa: South Africa, Botswana, Zimbabwe, Namibia, Lesotho, Eswatini, Mozambique and Malawi. Brazil, Canada, the European Union, Iran and the U.K. have instituted similar bans targeting nations in southern Africa. South African President Cyril Ramaphosa criticized the travel bans and called on wealthy nations to help poorer nations gain greater access to Covid vaccines.

PRESIDENT CYRIL RAMAPHOSA: The emergence of the Omicron variant should be a wake-up call to the world that vaccine inequality cannot be allowed to continue. Until everyone is vaccinated, everyone will continue to be at risk. Instead of prohibiting travel, the rich countries of the world need to support the efforts of developing countries—economies, that is—to access and to manufacture enough vaccine doses for their people without delay.

AMY GOODMAN: South African President Cyril Ramaphosa speaking on Sunday. We go now to Cape Town, South Africa, where we are joined by Fatima Hassan, the founder and director of Health Justice Initiative. Welcome to Democracy Now! Can you respond to, first, what has been discovered in South Africa, the transparency and speed with which South Africa revealed what is happening to the world and then response to the travel bans?

FATIMA HASSAN: Thanks, Amy. It’s good to be on the show. The first is that scientists in both Botswana and South Africa were able to detect and also disclose [inaudible] with a lot of transparency and with a lot of commitment to global cooperation in terms of sharing the science. I think they need to be celebrated for that because there wasn’t a cloud of secrecy around this particular variant. That is largely because we have really good genomic surveillance in Southern Africa which is also I think an important contributor to the way in which we have been able to discover variants and then disclose those variants and then address those variants.

What we saw in response is what you referred to in your introductory remarks, an uneven travel ban that was slapped on many countries in Southern Africa, particularly South Africa and then a few other places in the world. It’s really uneven and in our view, it is actually quite racist. This is why you had the president, after many months, coming out with quite a forceful statement saying that these countries should basically lift the ban and instead offer us global solidarity and offer a mode of cooperation where we can actually address this pandemic in a more meaningful way. Significantly, he’s basically called out these rich nations on issues that you and I have discussed before, and that is vaccine inequity.

AMY GOODMAN: Fatima, if you can talk about the fact that at this point it is seeded [sp] in many countries and to target Southern Africa is just impractical.

FATIMA HASSAN: It is impractical. It’s incredulous. It’s surprising. But I think it’s also consistent with the way in which the Global North has actually dealt with the Global South in this particular pandemic, where instead of scientific decision-making driving these decisions, it is a lot of knee-jerk reactions. The president used the word “knee-jerk” as well; it’s not just our language.

Secondly, The WHO has in the last 72 hours said that there’s still a lot of information that we don’t know. It is premature to basically make any kind of final determination on how transmissible this particular variant is, and certainly that is the view of the scientists and the experts in South Africa as well, that we simply don’t know enough and we don’t have enough information.

But I think it also goes to the heart of the matter, which is that we really need to urgently, expeditiously in my view, vaccinate as many people in Africa as possible. Amy, we are sitting at a 7% vaccination rate in Africa. We can go through the reasons for that, but that is simply really dangerous for the point at which we are in this particular pandemic. At the end of November 2021, to be sitting with a 7% vaccination rate is actually going to prolong this pandemic even further.

AMY GOODMAN: —more about this, and the irony of the World Trade Organization, where the TRIPS waiver is being considered and other issues, actually being postponed because of the Omicron virus, in Geneva. I am not clear why they couldn’t have had a virtual session since this is absolutely so critical. But if you can talk about this issue of vaccine equity and what it would take to get the world vaccinated?

FATIMA HASSAN: I think there are two things that would be necessary in order to get the world vaccinated quite fast, quite speedily within the next six weeks before the end of the year. The first is an urgent resolution and passing of the TRIPS waiver. You are absolutely right; there is no need to have an in-person meeting. You actually don’t need a ministerial conference for the WTO to pass the TRIPS waiver. For over a year, we have been saying that the TRIPS waiver should be passed. I think this variant has shown to the world that we really need to deal with the issue of intellectual property and pass this waiver urgently.

While he waiver is being resolved and particular text is being authorized or is coming to a final resolution, we need to make sure that we can get vaccine supplies into the system. Now there is this myth that there is sufficient vaccine supplies in Africa. That is not the case. It may be in one or two countries but the continent on a whole is basically waiting for supplies and for the better part of this year has been dealing with a drip-feed of supplies. Unless we can get millions and millions of vaccine doses into Africa in the next six weeks so that there can at least be 20% of people in this particular continent, we’re going to have more variants, and we’re going to have to be dealing with the consequences of vaccine inequity even into 2022.

You can divert supplies. You can give out stockpiles. You can make sure that there’s greater commitments to COVAX which is the mechanism that is supposed to be supporting low-income countries. But mainly I think it’s the first barrier. I’ve written about this in an op-ed earlier today, that you’ve actually got to dismantle the intellectual property restrictions so that we can scale up manufacturing, not just of the vaccines, but we’re also concerned now about treatment apartheid. As treatments come onto the market, we have got to make sure that Africa is also able to access them in a timely manner and also in a more affordable way.

AMY GOODMAN: Can you talk about the role of the United States? The United States poured billions into, for example, Moderna at the front end, and there are many who are saying that it is the United States that should be pushing for Moderna to share its recipe. Let’s not forget, poured billions on the back end of Pfizer, promised billions, promised the sales. What this means and what factories are available around the world? We are talking to Fatima Hassan, who is founder and director of Health Justice initiative in South Africa. She served as special adviser to—

FATIMA HASSAN: Yes, I am. I’m not sure what’s going on. That’s very unusual.

AMY GOODMAN: Fatima, we hear you again. You just dropped off for one second. If you can talk about the special role of the United States and what it specifically can do to push harder for vaccine accessibility around the globe? Fatima, can you hear me? Fatima? I think we have lost her again but this is certainly a discussion that we are going to continue to have. Fatima Hassan is founder and director of Health Justice Initiative in South Africa, served as special adviser to South Africa’s former Minister of Health Barbara Hogan.

The cochair of the South African committee on COVID-19 has said explicitly the most important way at this point to control the spread of the disease outside of vaccinations around the world is by being very clear about travel. Not travel bans, but ensuring only vaxxed people travel, positive PCR tests before travel, that travelers are asymptomatic, wear masks in travel and are retested on entry to a country.

Coming up, three white men have been convicted of murdering Ahmaud Arbery. We will speak to Black Lives Matter co-founder Alicia Garza. Stay with us.

[MUSIC BREAK] Stephen Sondheim, the great composer and lyricist who died Friday at the age of 91. Sondheim wrote the lyrics to the classic musicals including West Side Story and Gypsy and was the musical mastermind behind A Funny Thing Happened on the Way to the Forum along with many others including Sweeney Todd. He was an eight-time Tony winner and won the Pulitzer Prize for drama for Sunday in the Park. On Sunday in New York City, the Broadway community gathered in Times Square to honor, mourn and celebrate his life and work led by Lin-Manuel Miranda and others. They sang his songs. To see in performance Stephen Sondheim, perhaps his last, you can hear his voice in Tick Tick Boom about Jonathan Larson, the author of Rent. This is Democracy Now!, Democracynow.org, the War and Peace Report. I’m Amy Goodman.