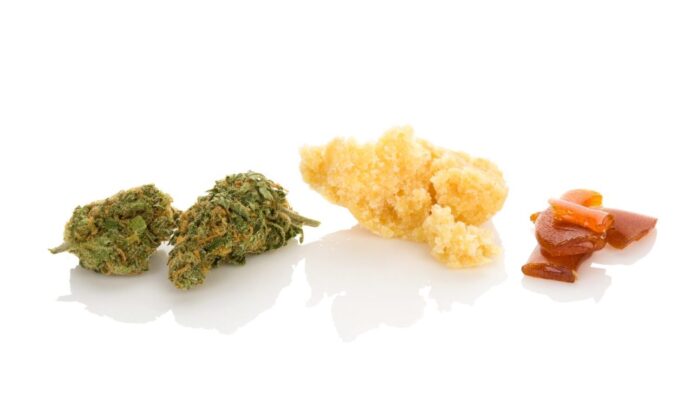 As marijuana business continues to explode in its growth, the methods of its consumption seem to evolve just as quickly. Flower cannabis represents only a small portion of most dispensary retail operations. And as time goes on, concentrates are becoming more popular and diverse.

As this niche market begins to outsell other marijuana products, it is important to understand exactly what marijuana concentrates are.

What Are Marijuana Concentrates?

Concentrates are just that, concentrated forms. There are several methods, but every form of concentrate represents much more potent THC or CBD content than its flower predecessor. Flower normally has a THC content that ranges from 10% to 25%, but concentrated products can exceed 80%.

The way a concentrate is extracted or made affects the final product. This also affects how it is consumed. Some concentrates are smoked while others are vaporized. Some can be applied to the skin while others can be eaten or even drunk.

There is a long list of concentrates on the market currently, and the list will likely continue to grow as other niche markets continue to form.  There are several concentrate varieties that are popular and worth noting as a starting point of knowledge for those who want to learn more.

Hash is the “OG” concentrate. It has been enjoyed for centuries, and has made quite a comeback with the boom of concentrates. Hash is typically fragrant, and is often pressed into a dense ball before consumption.

Shatter is a form of butane hash oil. Those who seek to find shatter often do so because it is widely considered to be the purest form of concentrate. It is usually a clear solid substance with a smooth texture. It can resemble glass, and just like glass it can shatter — hence the name.

Live resin is extracted directly from a fresh flower after it is flash-frozen. This method preserves a lot of the cannabis aroma and terpenes so it is a great choice for those who love that rich marijuana flavor. But, Is Resin A Good Replacement If Marijuana Supplies Go Dry?

Rosin is a common concentrate that many people create themselves using fresh flower, a hair straightener and parchment paper.  It has become wildly common recently as it is accessible and easy to create. Need some repurposing inspiration? Here’s What To Do With Marijuana Rosin Chips.

Wax, or dab wax, is possibly the stickiest form of concentrate. Dabs are concentrated doses — typically about the size of a Tic-Tac breath mint — of marijuana. Dabs are manufactured by extracting THC, most commonly by using a solvent such as butane. The end product is a potent oil often referred to as wax, honey, shatter, budder, crumble or butane hash oil (BHO). Here’s the difference between Dabbing Wax Vs. Vaping Wax.

Crumble is formed from wax. Once in wax form, if it goes into a vacuum or drying process it turns into crumble. Crumble can be formed or broken into pieces for dabbing.

Marijuana concentrates also come in oil form. The most common packaging is in a syringe (for topical use or ingestion) or in cartridge form. Oil is commonly used in e-cigarette style vape devices, producing a similar vapor to that of an e-cigarette, only infused with concentrated THC. Want more information? This is the #1 Difference Between Cannabis Oil And CBD Oil.

Concentrates should certainly be handled carefully. Just like with any form of THC, one should carefully research and monitor their consumption.

If all precautions are taken, a concentrate can be a great way to enjoy marijuana. In fact, its concentration can help dosing more precisely. Instead of “guessing” how you will feel after one joint, you can have a strong understanding of how one drop of tinctures or oil will affect you. As always, be sure to err on the side of caution when trying highly concentrated marijuana.

A 2020 study, conducted by CU Boulder researchers, suggested that although THC levels increase significantly in those who consume concentrates, boosting blood levels of THC more than twice as much as smoking conventional weed, the effects of the drug itself were not necessarily significantly greater.

According to coauthor Kent Hutchison, a professor of psychology and neuroscience at CU Boulder who also studies alcohol addiction, the study does not apply to inexperienced users, who should still be extremely cautious with concentrates.

RELATED: What Method Of Smoking Weed Gets You The Highest — Is There One?

“Does long-term, concentrated exposure mess with your cannabinoid receptors in a way that could have long-term repercussions? Does it make it harder to quit when you want to?” said Hutchison. “We just don’t know yet.”

For more information on concentrates, we recommend: