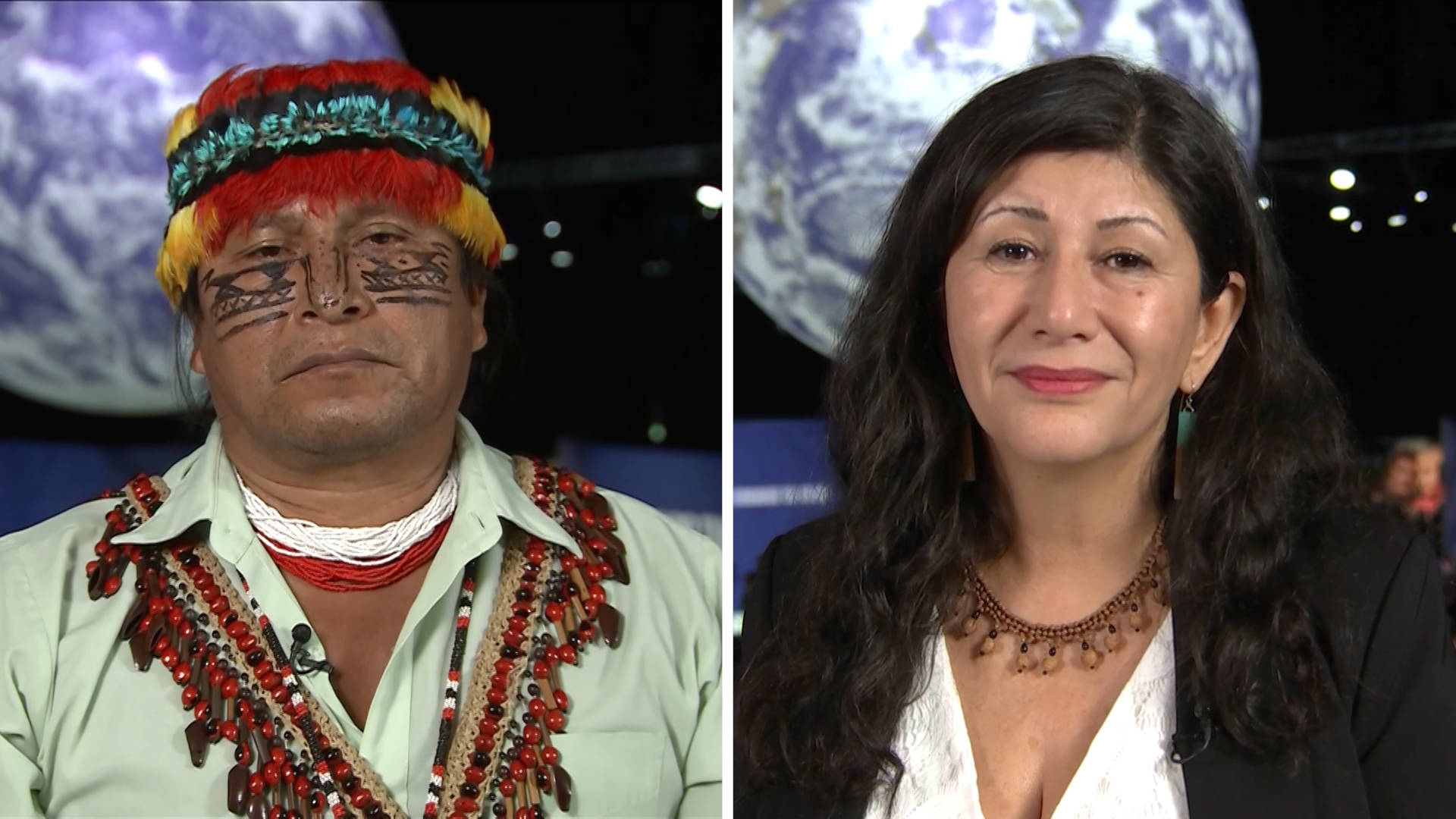 AMY GOODMAN: This is Democracy Now!, democracynow.org, The War and Peace Report. This is Climate Countdown. I’m Amy Goodman.

Indigenous activists led a number of protests last week in Glasgow calling on wealthy nations and big banks to address the climate emergency and to preserve the Amazon. On Wednesday, Indigenous activists protested at the Glasgow headquarters of JPMorgan Chase to push the bank to halt funding for oil and gas extraction.

While the protest was going on, we spoke to Domingo Peas inside the U.N. climate summit. He is an Achuar leader from Ecuadorian territories, coordinator for the Amazon Sacred Headwaters Initiative for the Confederation of Indigenous Nationalities of the Ecuadorian Amazon, which represents some 11 Indigenous nationalities from the Amazon.

We also spoke to Atossa Soltani. She’s director of global strategy for the Amazon Sacred Headwaters Initiative, also founder of Amazon Watch. I began by asking Atossa about why she was in Glasgow.

ATOSSA SOLTANI: I’m here in an unprecedented moment for Indigenous participation in the climate summit here in Glasgow. The Indigenous people here have been very vocal, visible and bringing their concerns from the heart of the Amazon basin — from all over the world, but in particular the Amazon basin.

Their demands are clear, that the governments need to halt policies, economic policies, and extractive industries that affect the forest, that we cannot win the battle against climate unless we protect the world’s remaining rainforests. The Amazon, the largest rainforest on the planet, is key to addressing climate stability. The Amazon is reaching a tipping point of ecological collapse, and we’re here to sound the alarm bells that action is needed now. No more talking, not just talking about how we reduce emissions, but we have to stop producing so much fossil fuels. The fact that fossil fuel production is still on the rise and that, you know, there has not been a moratorium, the Indigenous peoples here are demanding that there be a moratorium on fossil fuel extraction and that banks and financial institutions stop financing the activities that are basically increasing emissions instead of reducing emissions. And basically, the more we increase the supply, the more we’re going to increase the emissions. And so, that’s one key demand.

AMY GOODMAN: And if you can talk about the area of Ecuador and Peru that we’re talking about, this 86 million acres of rainforest, one of the most biologically diverse ecosystems on Earth?

ATOSSA SOLTANI: Yeah. So, you know, the Amazon basin is not only the lungs of the Earth, as you’ve often heard, but it’s also the heart of the planet in the way that the Amazon rainforest recycles rain and generates atmospheric rivers that are responsible for basically rainfall not only in the continent of South America, but all around the world. And that cycling of water is dependent on forests. And the more forests are cut down, the more that system of recirculating of the atmospheric rivers is on the verge of collapse. We are at tipping point, basically. And, you know, every tree, every acre of forest that’s lost, we are getting — basically, the window is closing for making a difference in the future of the Amazon.

So, within that context, the Indigenous peoples from all over the Amazon have called for a permanent protection of 80% of the Amazon by 2025. And that is a campaign that’s being launched. It’s backed by scientific evidence of that’s what the Amazon needs to maintain its vital cycles of the hydrological, hydroclimatic system.

And within that, the Sacred Headwaters is an area the size of Oregon that’s at the headwaters of the Amazon, at the source of this mighty river. What happens there affects downstream the rest of the forest. And here, about — the majority of this forest is threatened by oil and mining and logging, also infrastructure, dams, roads and agriculture. So, Indigenous peoples representing 30 nations have come together to call for the permanent protection of this forest and to really call for a transition, an ecological transition that puts life at the center of all economic and governance decision. They’ve developed a biregional plan, and hopefully Domingo will tell you more about it. This plan really contemplates an end to extractive industries, an end to the extractive economy and the dawn of a new economic model that’s based on forest and people flourishing — a just economic, ecologic transition.

AMY GOODMAN: If you could introduce Domingo Peas to us? I mean, I have introduced him as an Achuar leader from Ecuador, but if you could go broader, the context, and then ask him to talk about why he’s in Glasgow, if you wouldn’t mind translating for us?

ATOSSA SOLTANI: Domingo Peas Nampichkai is an Achuar leader from Ecuador. He’s been a tireless advocate for Indigenous rights. He’s been a historic leader. I’ve known him since 2000. He’s held many different positions in the Indigenous movement. And currently he’s the main — or, one of the main organizers that has united the Indigenous nations of the Sacred Headwaters region and has been tirelessly advocating for land rights, for basically a new model of economic development based on buen vivir, or well-being, and is incredibly inspiring. I’m really happy he’s here with us today. And I can invite him to say a few words.

UYUNKAR DOMINGO PEAS NAMPICHKAI: [translated] Good afternoon. It is great to be here, and I want to thank this medium and also the people of Glasgow for coming here, for listening to us, for giving me an opportunity to say why I’m here, why we’ve come here to defend the forest.

I’m here because all of the governments of the world have gathered in this COP26 and they’re talking about addressing climate crisis. I’m here representing the Indigenous nations of Ecuador and Peru. We have brought a proposal, a solution to climate change from our territories in the Ecuadorian-Peruvian Amazon that’s called the Sacred Headwaters.

I’m also here to seek allies, to look for allies, because the problems of climate change are basically driving humanity toward the brink. These are serious problems, and it’s going to take alliances with Indigenous peoples on the rest of society to address them. The Amazon is key to solving the future crisis facing humanity, and that’s why I am here looking for allies. It’s going to take all of us, all walks of life, all sectors of society, to come together to be united, to seek solutions that are for the interest of the common good for all of humanity. And that’s why I’m here.

The Sacred Headwaters Initiative is proposing a permanent protection of the Sacred Headwaters region. We have said, “No more oil drilling. Leave fossil fuels in the ground. No more mining. We don’t want more logging. We don’t want more extraction.” This is basically a call for humanity to stop the destruction and permanently protect this important area.

And this area of the Amazon is incredibly important. Biologically, it’s where 30 Indigenous nations have come together and said, “Enough is enough. We don’t want extractive industries. We don’t want more oil drilling. We have to protect this area.” There are 30 indigenous nations and 30 million hectares of intact forest that are at stake. We must protect this for all of the creatures that are here, not only animals, the visible creatures that we see, but also for the invisible. The forest is calling on us that we have to do this ecological transition, that we cannot continue the path that we’ve been.

Let’s put a pause on history. Let’s not blame people for the history of what’s happened in the past. Let’s move forward and construct a new path forward that addresses the critical condition that humanity finds itself in. We have to, all of us have to, work together — young people, old people, women, men, every sector of society, government. We must work together for our common future. And it is that transition, ecological transition, is what we’re seeking. And that work begins within ourselves. We must first change our relationship to nature, change the way we think about the world, and really put at the center of our thinking our connection to life and our commitment to future generations.

AMY GOODMAN: I want to thank Domingo Peas for speaking with us. Does he have one last message that he wants to share?

UYUNKAR DOMINGO PEAS NAMPICHKAI: [translated] So, I want to make an invitation. I call on everyone, all walks of life. I want everyone to unite and find our shared future, a common future. We have to stop resisting change. We have to stop resisting one another. Special interests have to fall away. We have to unite for the common future, because there’s no way to move forward in this moment in time. I want to call on young people. I want to call on men and women to come together and search for solutions together. There’s not going to be the way of the past. It’s not what we’ve done in the past, isn’t going to work. We must construct new paths based on ecological consciousness and a love of humanity, and a path that is about our common future.

AMY GOODMAN: Well, Domingo Peas, I want to thank you for being with us, Achuar leader from Ecuador. And finally, as you race off to the airport, Atossa Soltani, if you can speak specifically about the banks, the protests that have been taking place, most recently on Wednesday, the Indigenous leaders demanding JPMorgan Chase halt fossil fuel financing, and, overall, the other banks, as well, like the new commitment from the Dutch bank ING announcing they are the latest bank to commit to ending new oil financing — they’re continuing with old financing — but what this all means, what these banks are responsible for?

ATOSSA SOLTANI: Amy, in order to address the goals of the 1.5 degrees of the Paris Agreement, I mean, in order to stop the collapse of the biosphere and the tipping point of the Amazon, we need fossil fuel-free future. We need banks to divest from fossil fuels. The fact is that the current Paris Agreement doesn’t even address the word “fossil fuels” in its agreement. We are not regulating or restraining production. We’re only talking about emissions. Meanwhile, what’s currently in the pipeline for banks to be financing, you know, what’s in the process of being permitted by countries and financed by the banks in Europe and in North America, is enough to send us way over the 1.5 degrees.

So what we need is to basically commit to a fossil fuel moratorium, a moratorium, a fossil fuel nonproliferation treaty. And I know that the campaigners here for that movement are having a press conference to announce what that is — you know, where that effort can go. But, meanwhile, banks need to make a commitment. There’s an Amazon Exclusion Policy. You can check it out on Amazon Watch’s website. And that calls for banks to end their financing to fossil fuels. We cannot be filling the bathtub at the same time as talking about offsets and emissions, while we’re continuing to put emissions in the air. And we need absolute reductions. And that has to start with stopping production.

When we come back, the Reverend William Barber will talk about the trial of the three white men in Georgia who are on trial for the murder of Ahmaud Arbery, the Black jogger. Last week, a lawyer for one of the men said Black pastors in the courtroom are intimidating the jury. Stay with us.